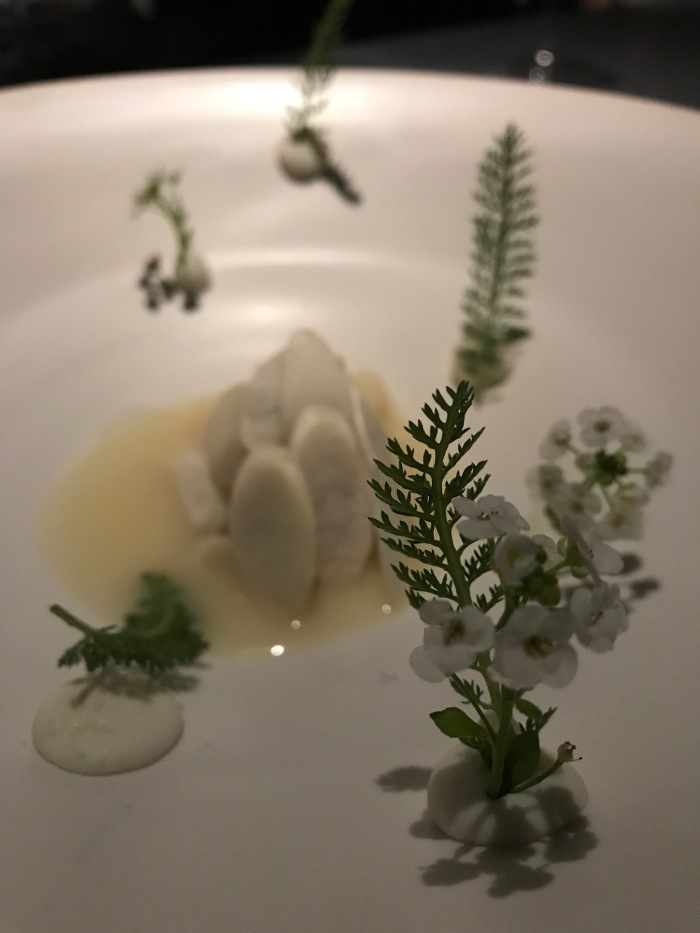 First, look at the dish above. This is NOT a winterscape –

IT IS A PLATE OF FOOD.

Now, here is the “statement of purpose” from the restaurant that serves them:

“Vespertine is a gastronomical experiment seeking to disrupt the course of the modern restaurant.”

And boy, does it! Acclaimed Food Critic Jonathan Gold’s “101 Best LA Restaurants” list came out, and he picks Vespertine as #1 – a choice that has sparked much debate in the food world….why? Well, it all begins here, in this unique building that houses the restaurant – AND ONLY THE RESTAURANT.

YES, this entire structure is Vespertine! That’s my wife Alex posing in front before We headed in for dinner. What is Vespertine exactly?

“VESPERTINE IS THE VISION OF CHEF JORDAN KAHN. THE PROJECT WAS FORMED THROUGH A COLLABORATION WITH ARCHITECT ERIC OWEN MOSS, AND A GROUP OF RENOWNED ARTISTS TO RE-IMAGINE AND EXPLORE THE EXPERIENCE OF DINING. THE CONVERGENCE OF FOOD, ART, ARCHITECTURE, MUSIC, AND SCULPTURE IS WOVEN THROUGHOUT TO CREATE AN IMMERSIVE, MULTI-SENSORY EVENT.”

My wife and I went there for our anniversary last month – and there are almost no words to describe the wild food wizardry on display – but we took pics of all of it, so here goes!

We began with a gin-based drink served to every table – a welcoming taste with a unique look…just the tip of the iceberg for what was to come – like this “water spinach” dish that was sprinkled with a colorful array of herbs, spices and “pike roe”: 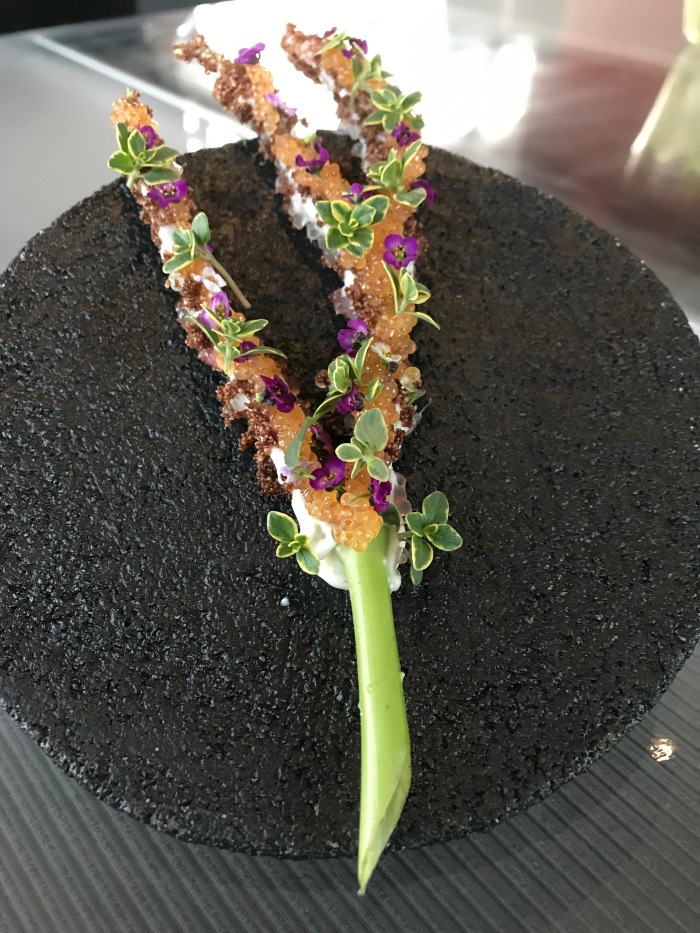 It was slightly crunchy, full of flavor, and it led right back into the water, with this “dried kelp” chip – yes, the rounded “crisp” in the center of this orb was dried kelp, which you were to break off and dredge through the uzu-infused cream and herbs to the left! 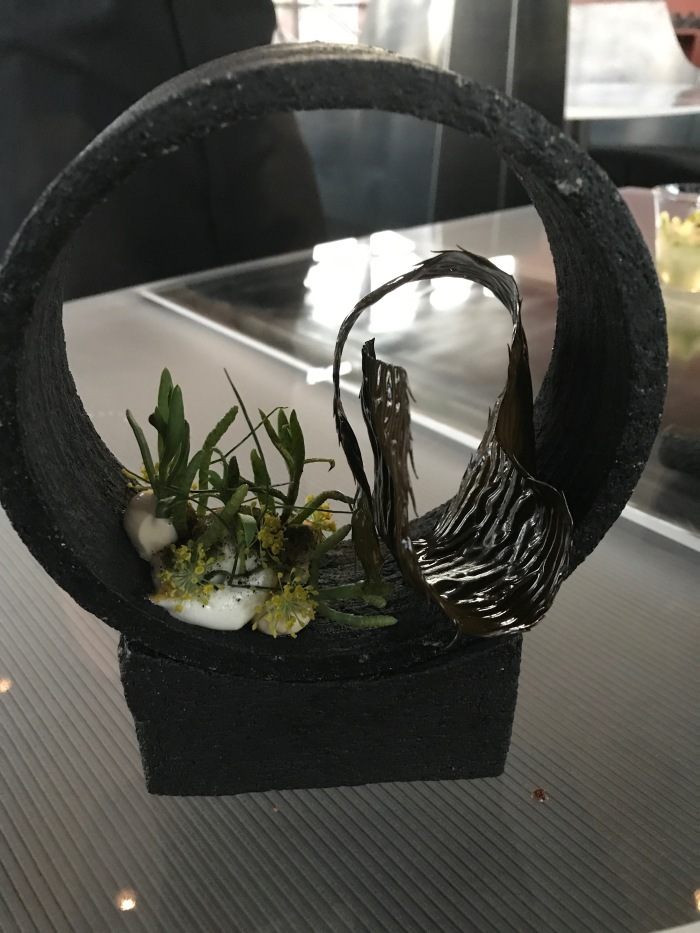 The dried kelp was briny like the sea, crisp like a thin potato chip, and utterly delicious…I think you get the idea: each dish was going to be presented as a piece of edible art…impossible to describe the ingredients, other than to say next up was this:

This is actually delivered in two pieces – which are split apart to be served to each of us. Inside this dark volcanic rock is a “burnt onion and black currant” bite – a bit like “taffy meets fruit rollup” – and delicious! 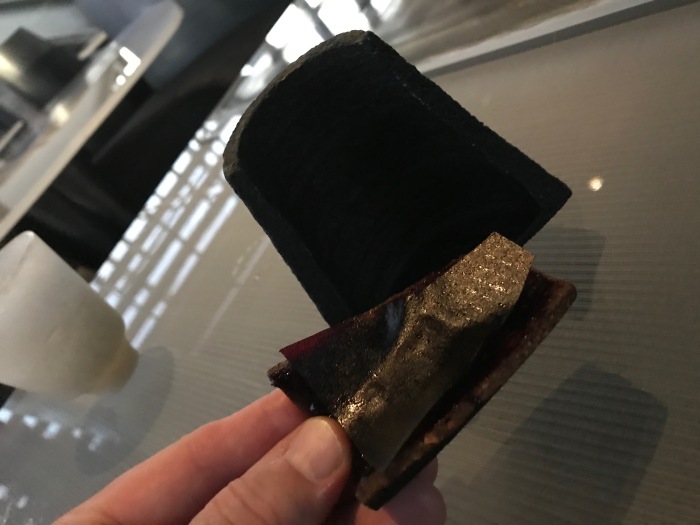 The restaurant was happy to have us take pictures of each dish – just no flash photography so as not to disturb the other diners – next up, a flavorful slice of mango – served embedded in redwood!

What’s Next? Who Knows!

I have to tell you that many of pictures to come are going to be “unidentified” – even with a menu, the composition of the dish is so unique that I cannot be sure I am identifying each one correctly….for example, here are a couple of dishes that followed next:

This one I remember: the green disk covered what was a snap pea dish – and using your spoon, a sharp tap reveals this underneath: 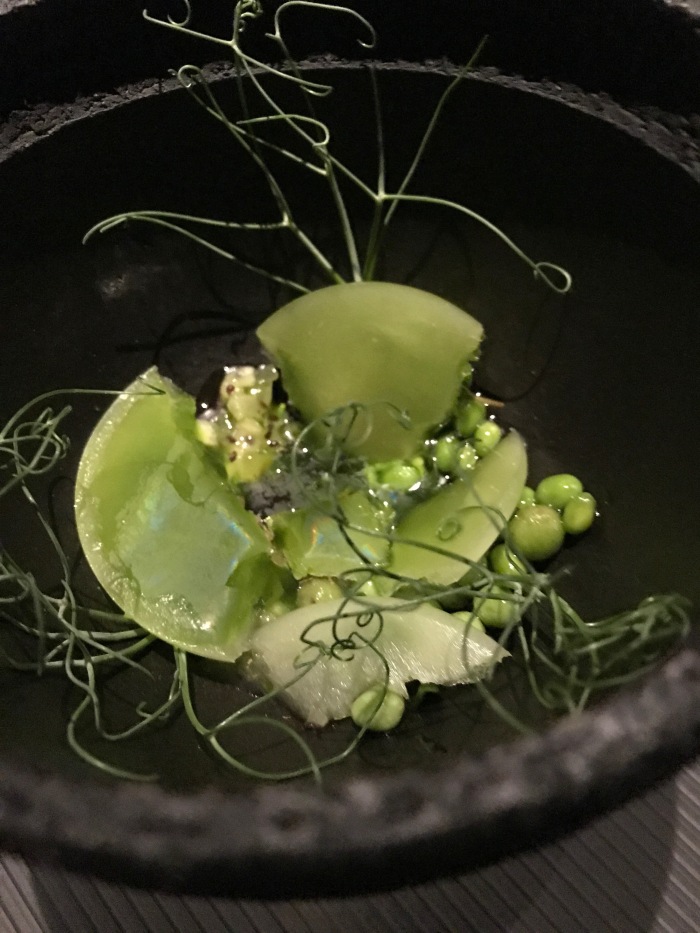 The disk was ice cold, but the warm pudding-like snap pea underneath was a terrific contrast. And speaking of contrasts, what about this scallop dish: 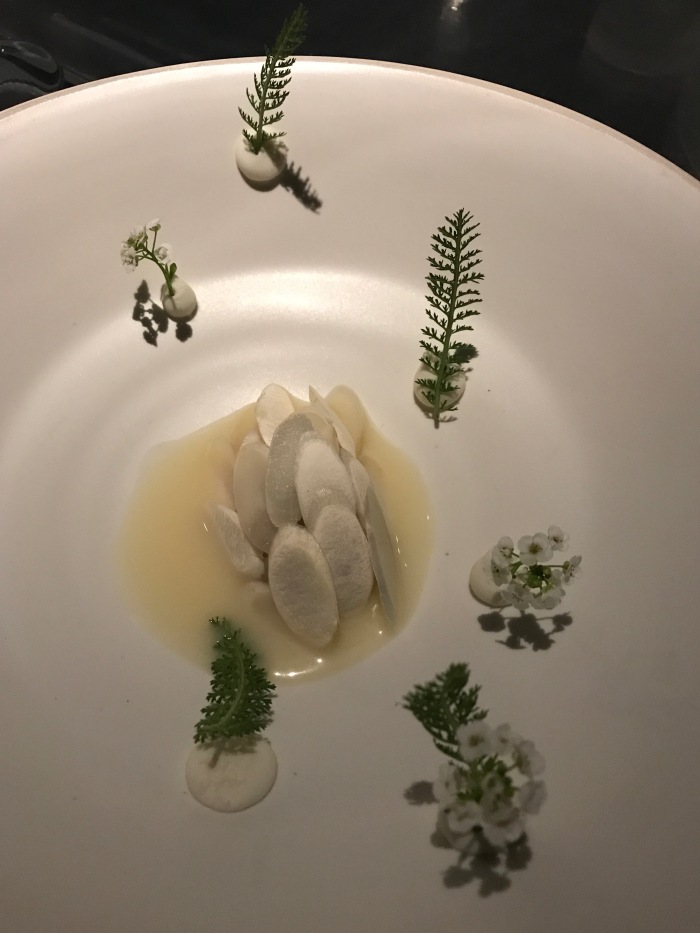 Folks, we aren’t done yet – this “tasting menu” lasted almost three hours – dish after dish of amazing creativity and flavor – like this!

Yes, this bowl has slivers of endive lining the inner wall, and another frozen disk on the bottom – but when you crack the disk, there is your caviar! 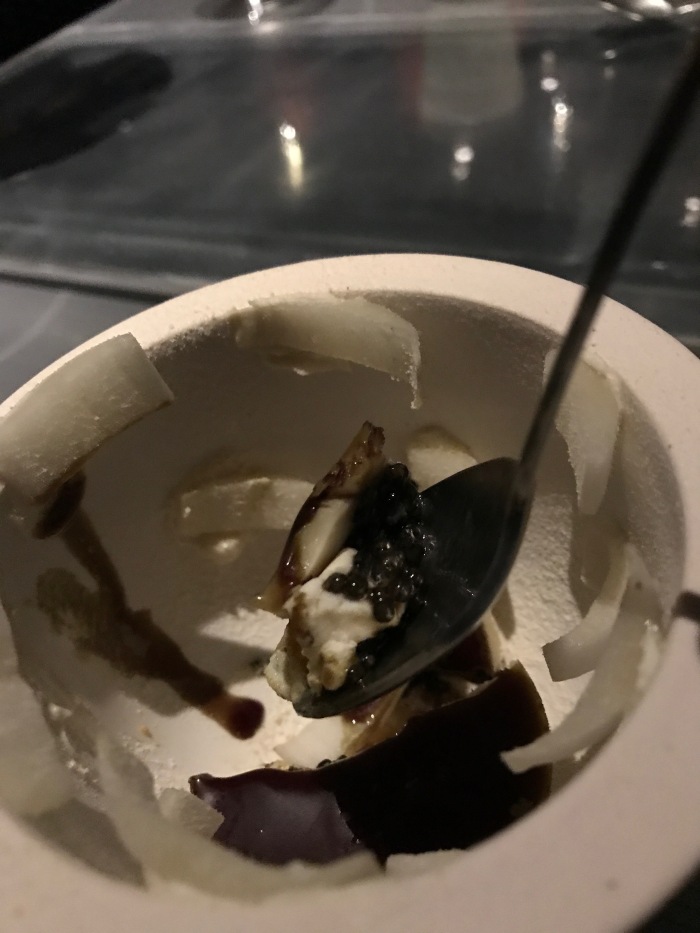 And the next dish came with very specific instructions: 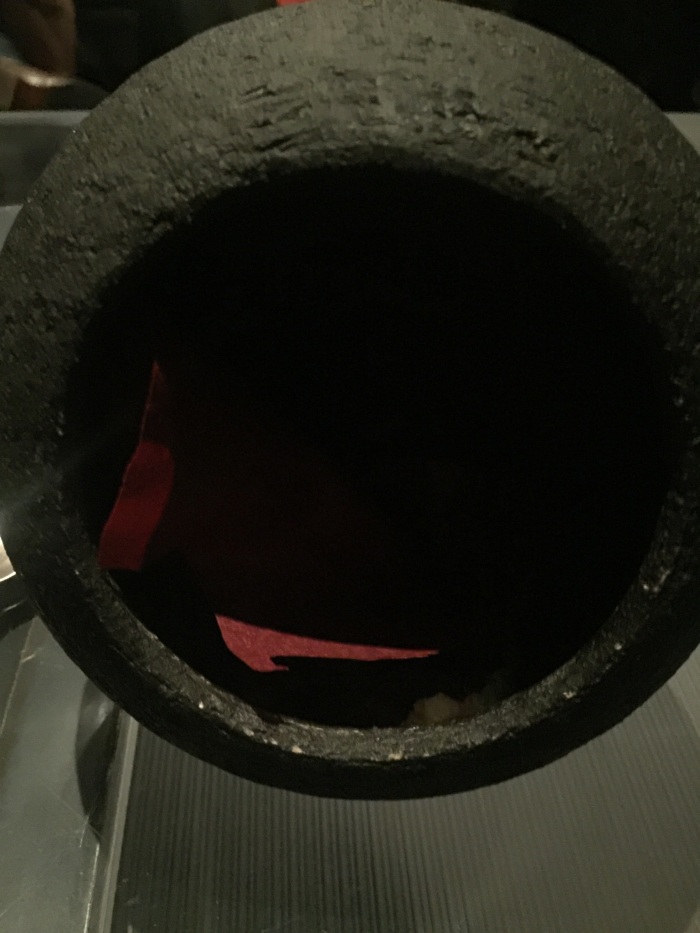 First of all, I’m not kidding. We were asked NOT to look inside, but just put our spoon in there, close our eyes and take a bite! Oh, and one of the items inside was red spinach!

By now our heads were spinning from the creativity of the kitchen – and it just kept coming – here is a crab and macadamia salad, hidden underneath a bowl of fresh herbs and leaves:

Next up was the only “meat” dish, a piece of turkey breast served wrapped in rhubarb!

And this is a Sea Urchin dish with lemongrass: 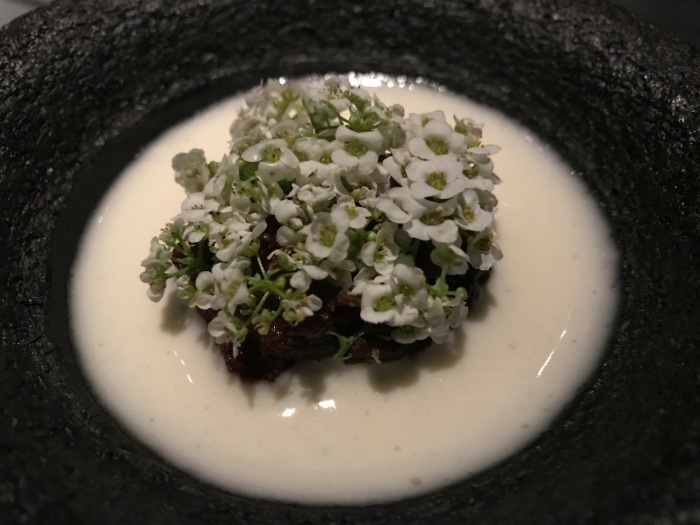 This first dessert we think is a Black Raspberry buckwheat pancake, and see that white frosty “snow” on the inside of the dish? That’s a frosting that you scrape up and eat as well! This dessert was followed by a Almond cucumber dish served in another charcoal orb: 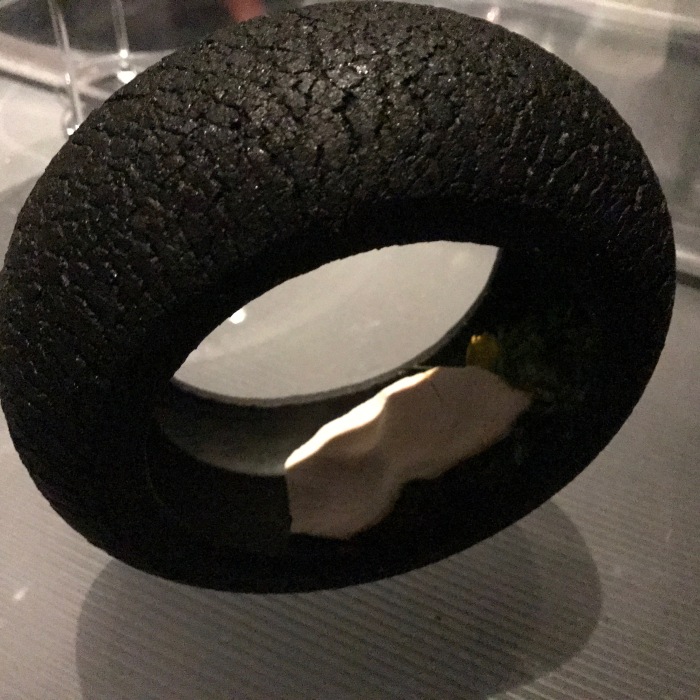 Finally, we were done – but we weren’t! You can also order an after dinner drink outside in a special garden, where you have a private sitting area hidden partially behind hedges, and when you arrive there are three separate post-dinner drinks waiting, plus some snacks to go along! 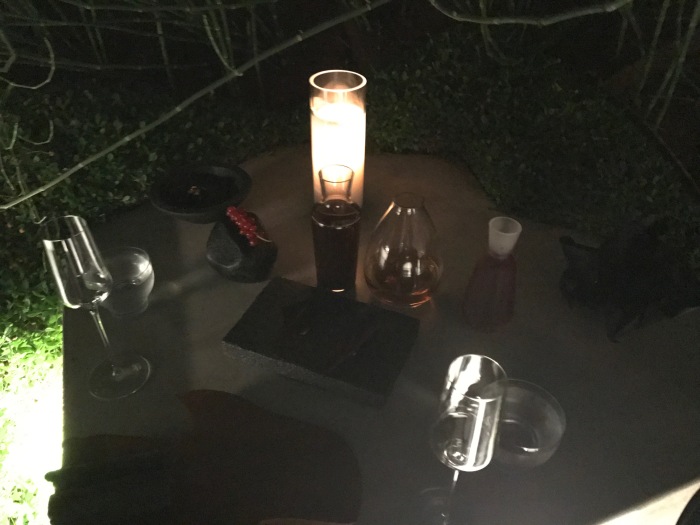 Vespertine is, without a doubt, one of the most unique meals we’ve ever had – food as theater, food as art, food as experimentation!

We received a very nice note from the restaurant the next morning, not only thanking us for doing them, but including a copy of the menu for us! Yes, it appears that the % of the moon showing that night is at the top of the menu!

Yes folks, THAT IS THE MENU. That’s why you have to take pictures of every unique dish, in order to try and remember what it was!

Oh, and here is how this amazing restaurant looks at night:

Alex and I love to try new and unique restaurants, including Alinea, the three star Michelin restaurant in Chicago, from Chef Grant Achatz: 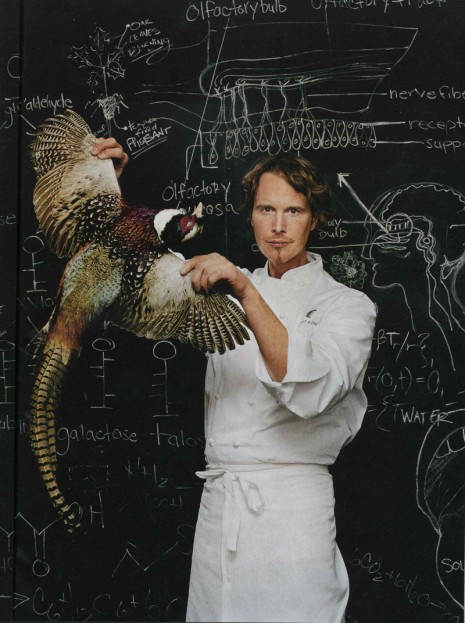 A night at dinner with him is also a magical experience – you can see our most recent meal here:

Alex and I had a meal at this restaurant as well, and you can see that here:

Bravo to Vespertine and their entire team for an incredibly memorable night!