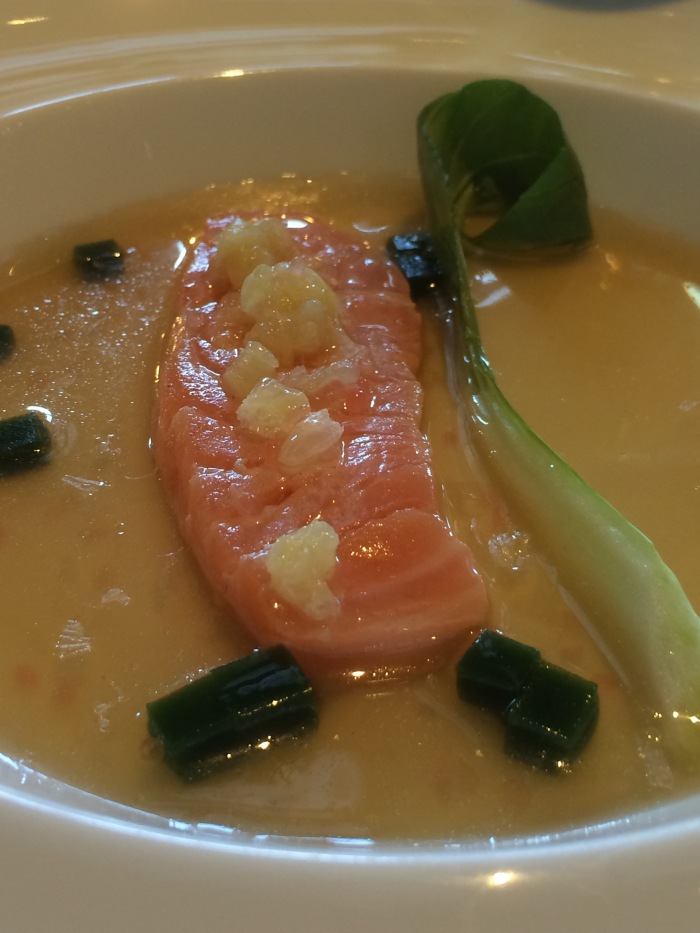 My wife Alex and I were lucky enough to visit Paris for Christmas, and in seven days we consumed ten Michelin stars worth of amazing food! 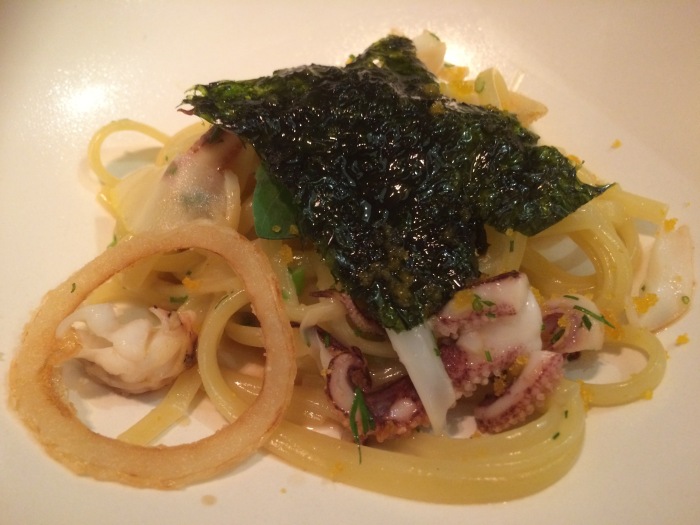 As you can see, we had some truly amazing meals – time to share them all with you!

Let’s begin with two Michelin three-star restaurants – one classically French, and one offering up some of the most unique dining we’ve ever had! 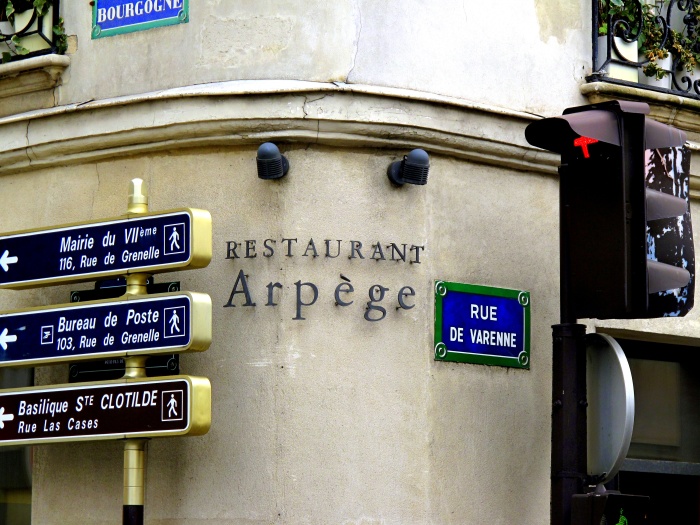 We begin with one of the most creative Chefs in Paris! Chef Alain Passard earned his 3rd Michelin star in 1996 and has held them ever since….and in 2001, Chef Passard rocked the culinary world when he announced he was going to focus on vegetables in his cooking! 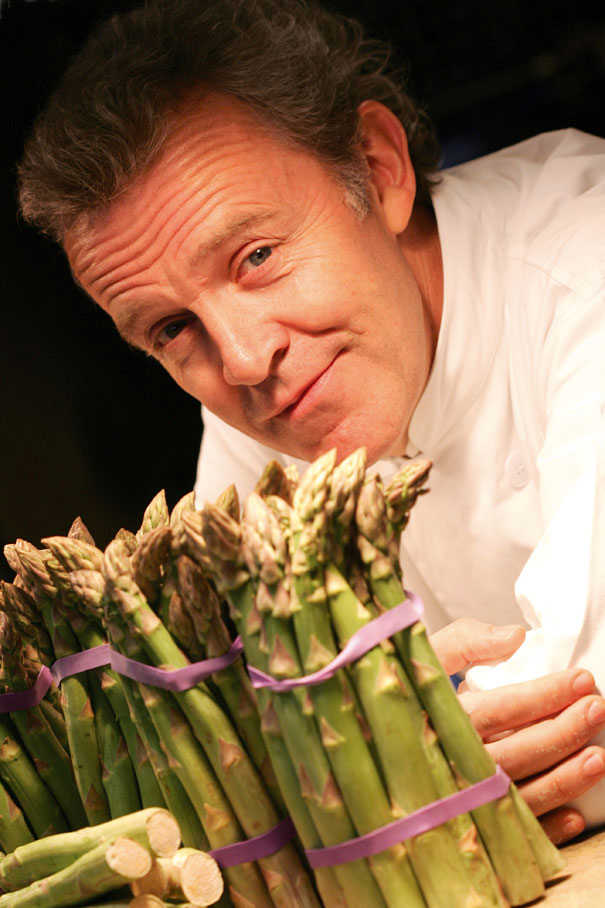 While Chef may have moved proteins to the side, he didn’t lose any flavor at all! Here are some examples of his playful touches with food, and since it’s primarily vegetables, why not this: 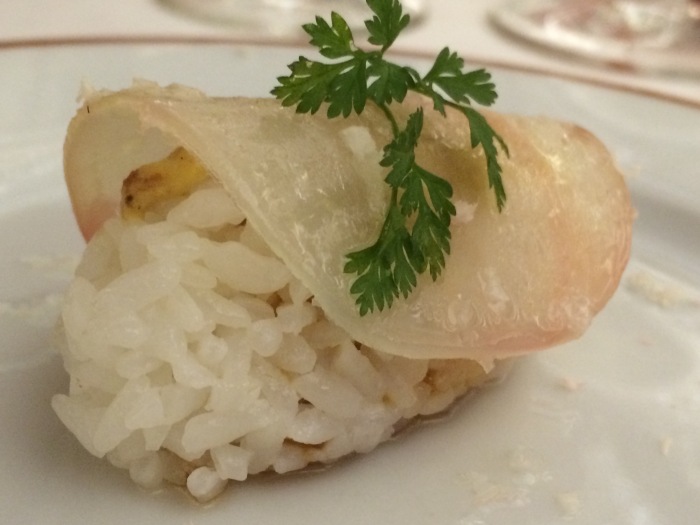 That’s right, one of our dishes was a pickled sliver of beet atop a warm mound of slightly vinegar’d sushi rice!

And while Chef loves his veggies, proteins aren’t ignored: 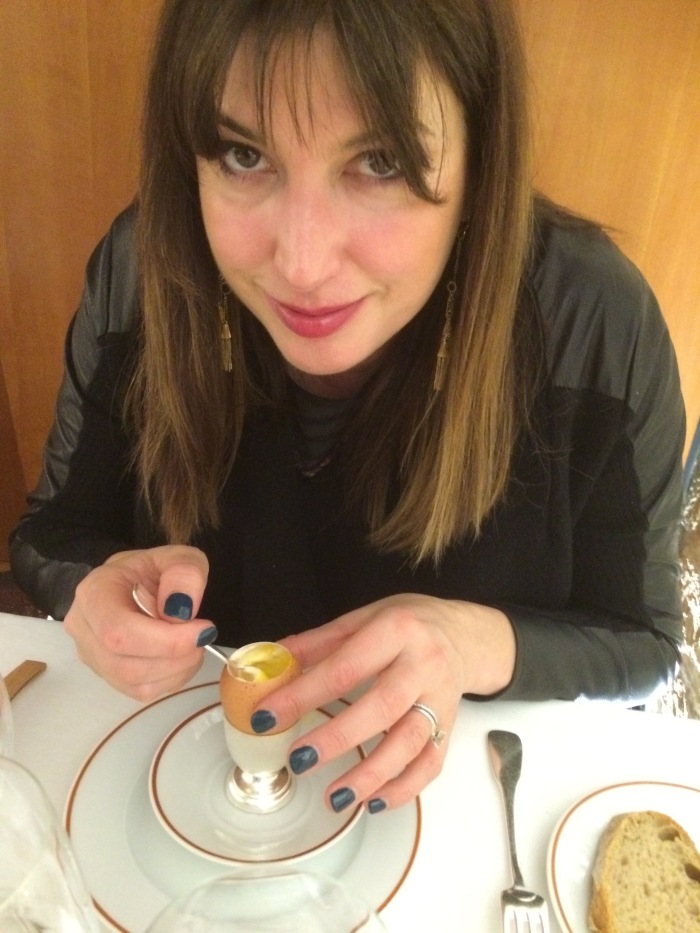 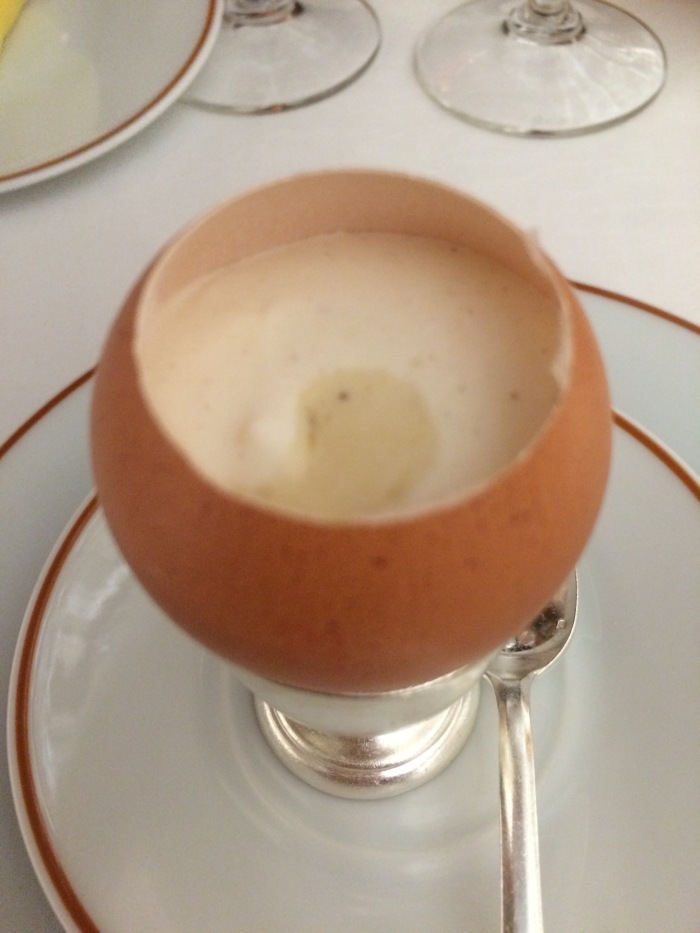 Yes, Alex dug right into a cold egg custard that was served in an open shell – on top of a warm egg yolk!

And since Chef is focused on vegetables, he offers a “stuffed cabbage with black truffle garlic and parmesan cheese emulsion” as well! 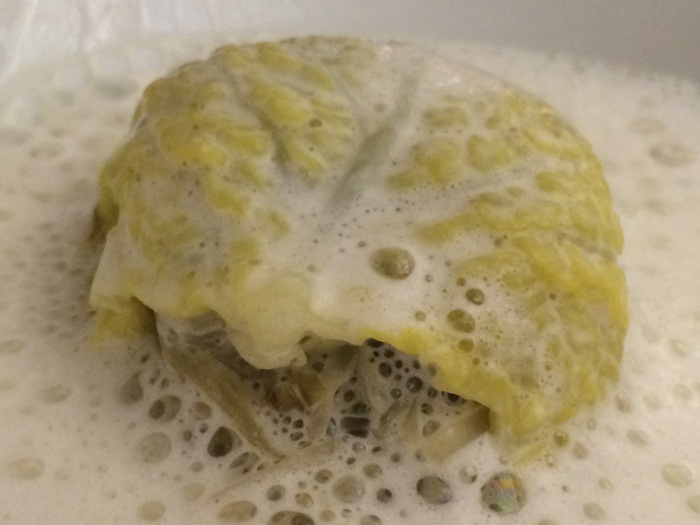 His tour de force on this day may have been the “Pumpkin Soup With Smoked Ham Mousse!” 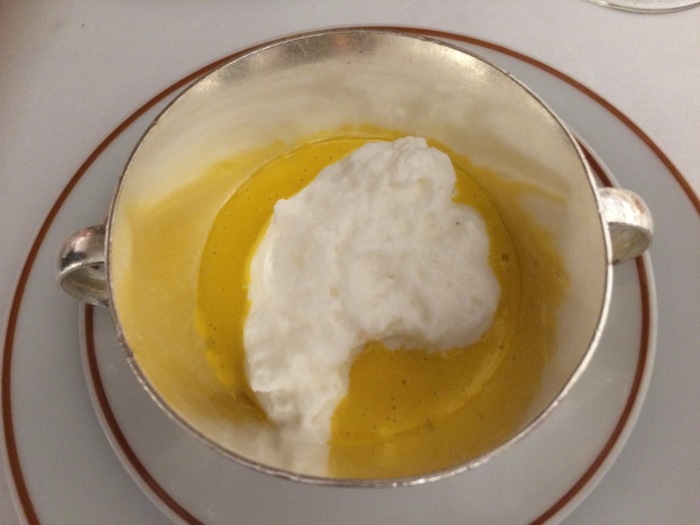 Yes it was an incredible “ham foam” that was smoky rich but light and delicious, and then we were shown the dessert that was another of Chef’s surprises:

This is a pear tart, with each baby pear shaped into a rose! After this incredible meal, Chef Passard came back to the table to pose with us!

Our other ‘three star” experience was at a much more traditional French food palace, but the Chef was also engaging, warm and welcoming – and the entrance was spectacular! 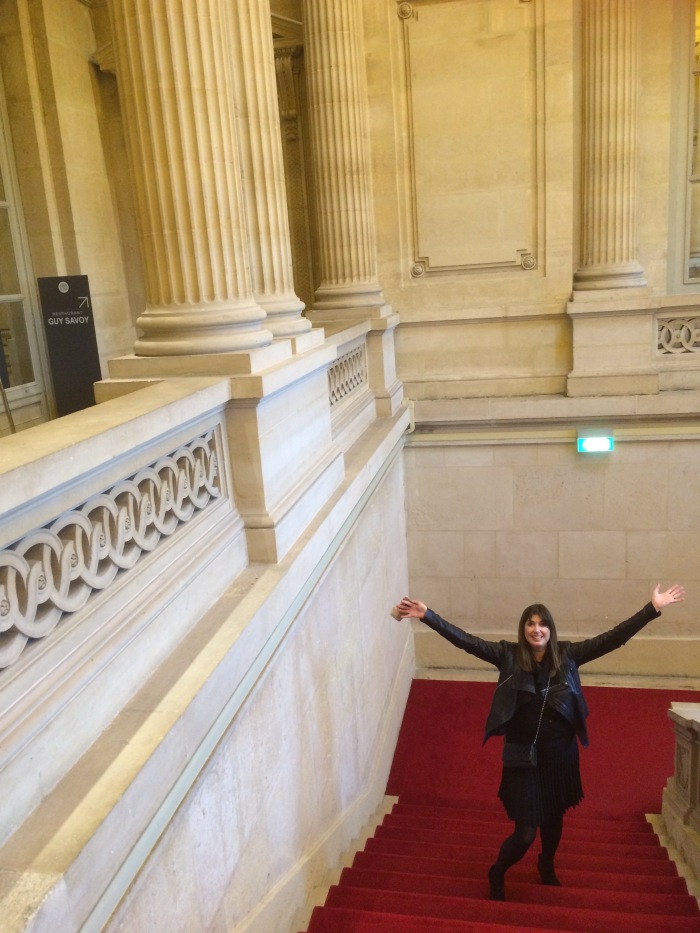 Alex got the red carpet treatment when we arrived at Guy Savoy, because you enter a 4,300-square-foot top-floor space on the site of the oldest institution in France – which is also the oldest factory in Paris: the Monnaie de Paris — the French mint! 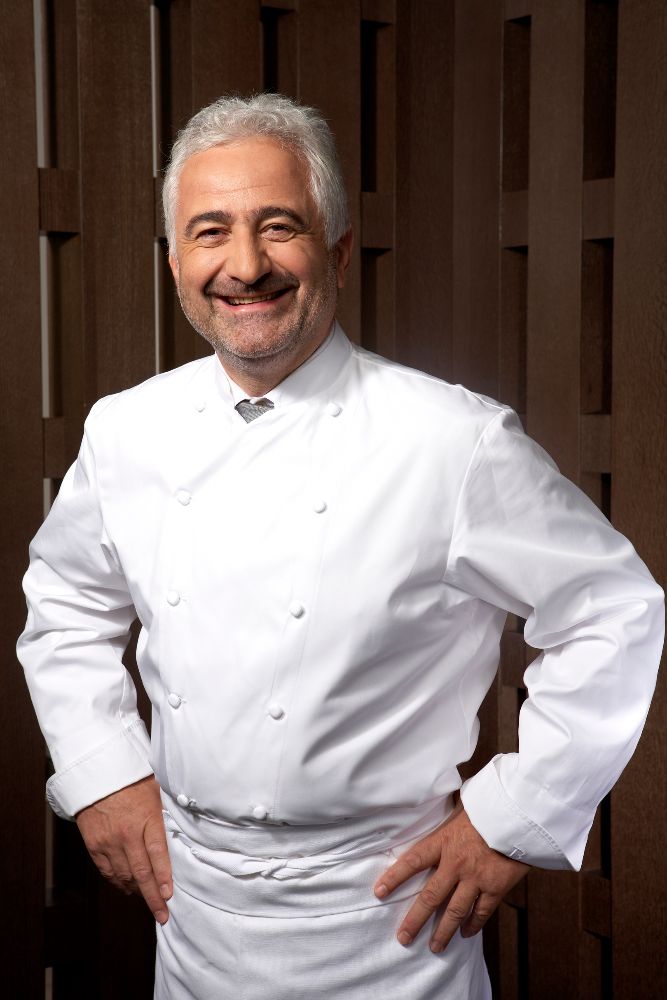 Chef Guy Savoy got his third Michelin star in 2002 and has held them ever since – Savoy offers up a more traditional french 3-Michelin star dining experience, but still full of surprises, which begin when you get:

“Leek Soup With A Surprise Underneath”

Yes, you are served a small ramekin of leek soup, rich and flavorful, and you are told of a “surprise underneath”, so you lift the bowl and “voila!” 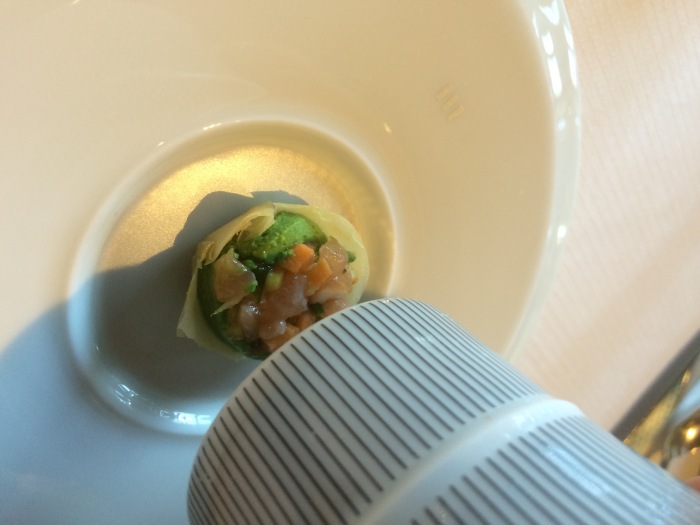 That’s right, a tuna tartare with avocado in a potato shell is underneath the bowl!

And speaking of incredible bowls of food:

“The chef wants to welcome you today!”

Thats what our server announced as he delivered a pumpkin and black truffle soup to the table – a Guy Savoy classic! 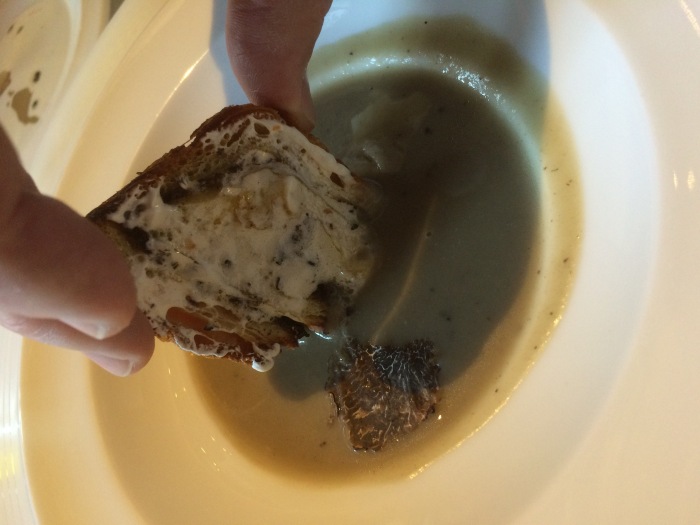 The richness of this dish was beyond belief, and the size was just big enough to satisfy without stuffing us…a truly remarkable dish.

And if you wonder what it takes to become a 3-Star Chef, here’s a clue:

Talk About Your Cold Food Prep!

One of the other signature dishes at Guy Savoy is Chef’s unique way to prepare salmon – yes, on a slab of dry ice!

As you can see, a large cart is wheeled over to your table, with a -78 degree hunk of dry ice – for their signature “salmon cooked on dry ice with lemon and chervil gelee dish!

Here is a video I shot capturing one aspect of the cooking process:

And here is how it looks when presented on your plate:

Guy Savoy is a true 3-star experience, but we have only hit six of our ten stars so far, so let’s dig into some one-star food magic as well!

This innovative restaurant is located in the Marais, just up from the Louvre…

Chef Adeline Grattard has a long history of cooking in Asia, so she creates exotic dishes that mix french style with asian bursts of flavor. Her partner and husband Chiwah is known as the “Tea Guru”, and you are given a unique tea when you first arrive… 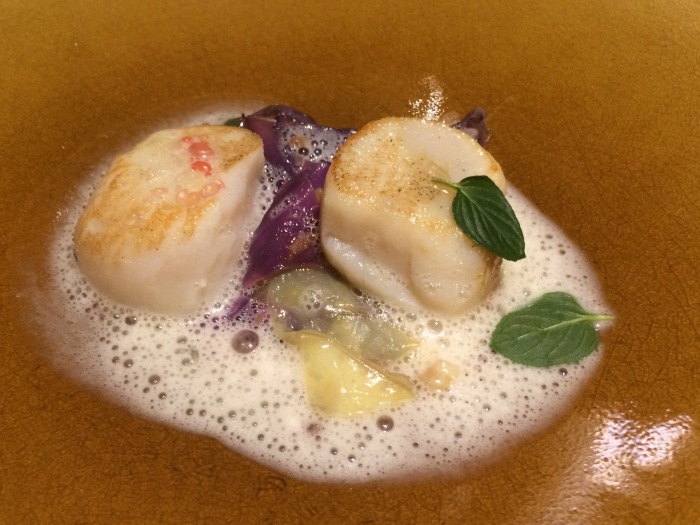 Among the creative dishes served up were these Scallops with an Asian foam and purple cabbage….and an incredible Sea Bass: 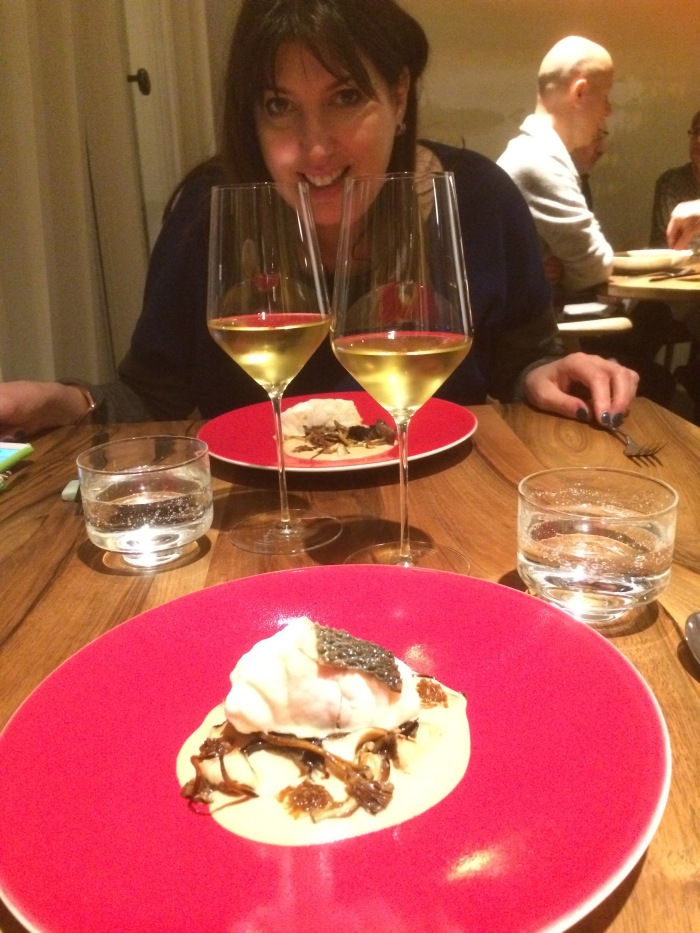 This sea bass was served with a foie gras sauce – absolutely delicious! 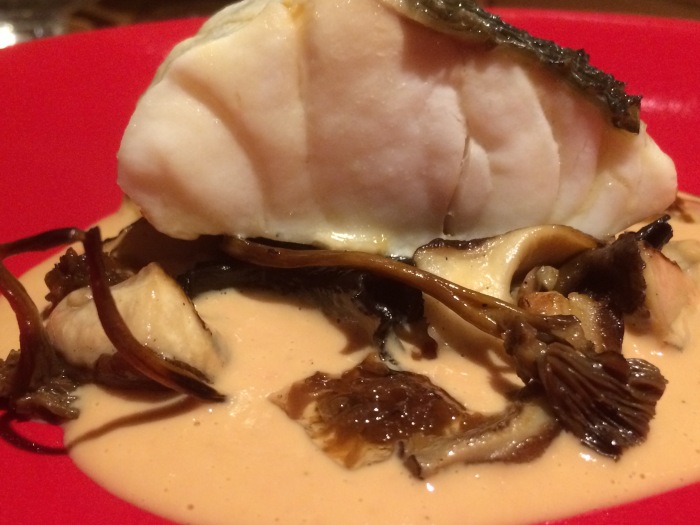 One of the most unique dishes is pure Asian in appearance, and pure French in flavor! 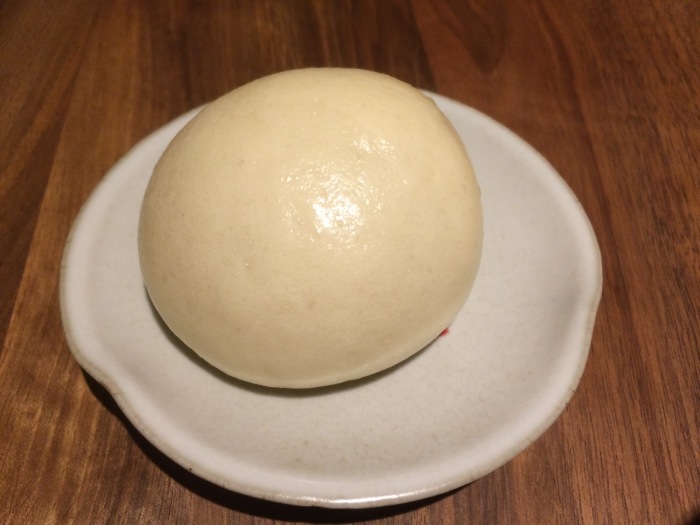 Sure, it looks like an Asian Bao, which they make and sell at a neighboring shop as well…but this is the cheese course!

That’s because when you bite into the bun, you get a curry-infused cheese center! 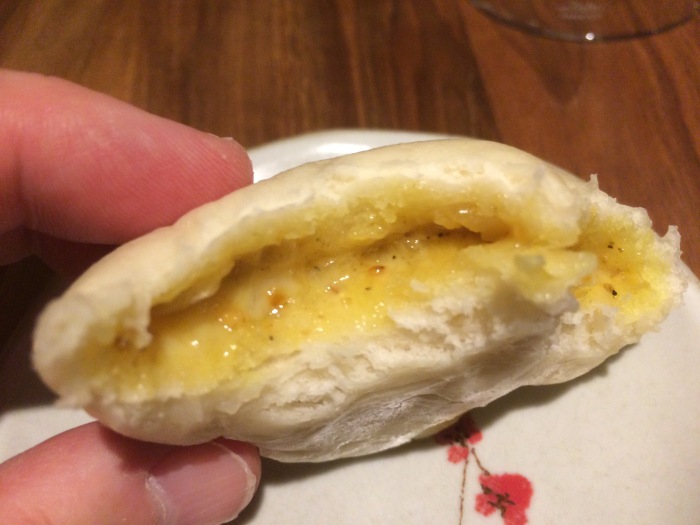 Bravo to Chef Adeline Grattard, who certainly has more stars in her future! Another incredibly creative, Asian-influenced Chef is operating just across the Seine from the Notre Dame Cathedral!

Another great restaurant is called “Ze Gallerie Kitchen” – and while the interior looks very “pop art”, the food is meticulous in its preparation! Chef William Ledeuil learned his craft working for Guy Savoy, and his food comes out looking like a 3-star dish!

Here’s an example: a beautifully seared piece of lamb showered with Black Truffle…

What was so fun here is that we were seated right next to the kitchen, so we could watch all of the magic as it was created – and which I captured in a snapchat:

Another terrific dish was the “Squid pasta with Linguine”: a simple dish that was loaded with flavor, yet delicate…

And finally, one other dish worth noting:

Sea Bream with Lemon and Diced Oyster and Grilled Scallop!

The richness of Sea Bream, with small bites of the other ingredients made this dish a winner for us – and of course, made all the more fun by being able to watch the kitchen in action:

Our next stop on our food journey literally took us to the highest eating spot in Paris!

This was our Christmas Day lunch – what better way to celebrate the holiday than by eating at the Jules Verne restaurant, located on the second level of the Eiffel tower! 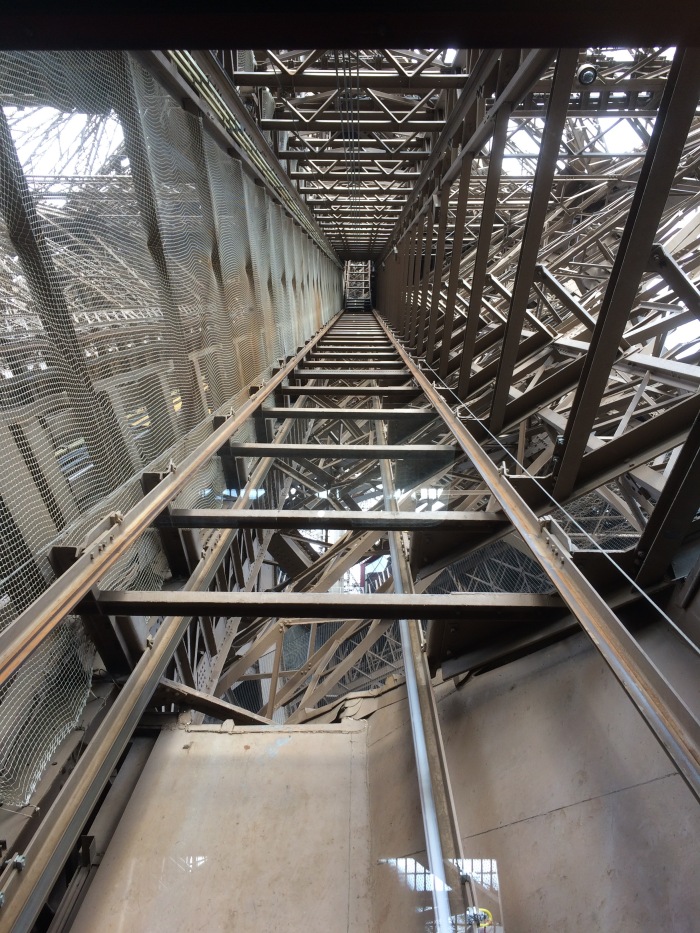 You get to avoid the long elevator lines because the restaurant has a private one just for you! Here’s what it’s like to go up to the restaurant:

We have a terrific view toward the business area of Paris. Of course, since you in on the second level of the Eiffel Tower, you get a great view of the structure as well! 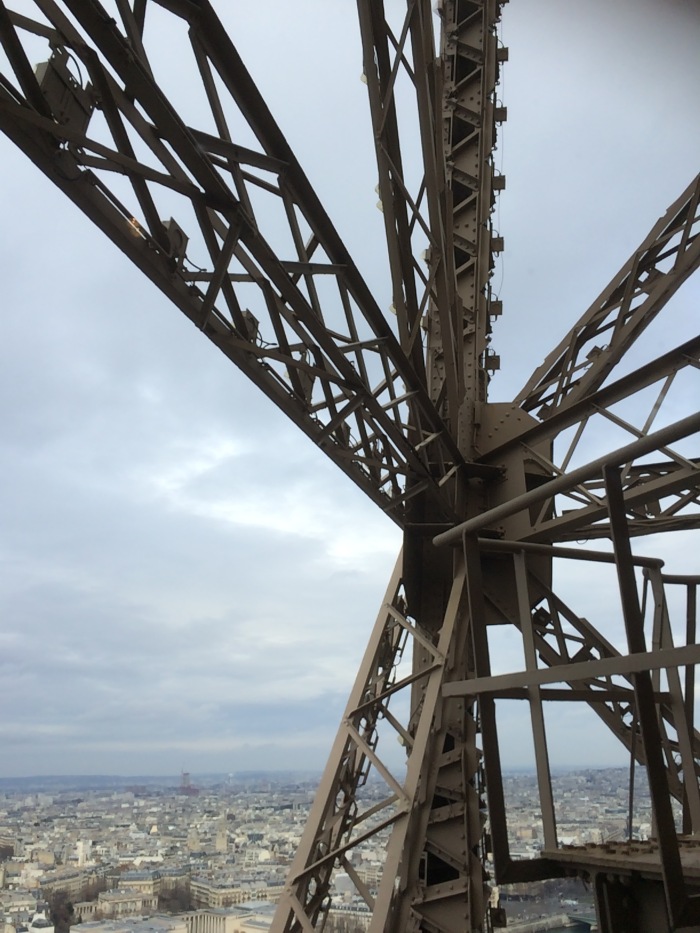 We had a special Christmas Day menu, with lots of great wine, and classic foie gras terrines like this:

The launch was a relaxed and enjoyable 2-1/2 hours, and ere was our favorite dish that day: a chicken breast served in a foie gras sauce!

A fish course was also delicious! While dining, it was fun to check out the people who were on the observation deck directly below us:

Eating in the Eiffel tower is always a fun way to see the city from above, and you can walk around the observation deck as well!

Finally, there is perhaps no better composed dish in Paris than this one – featuring two of my favorite foods:

Welcome to Apicius, a terrific restaurant just off of the Champs Elysee – and their absolutely delicious tower of potato and caviar!

This tenth star feast is amazing – a rich potato tower topped by an equally powerful portion of caviar…we had ten stars of food magic on this Paris trip!

Now, we also had a stop at Chez L’Ami Louis for their amazing roast chicken, and you can read about that here:

And we stopped by one of our favorite bistros that serves this amazing meal:

Yes, it’s all about the “Pig’s Trotter” at Au Pied du Cochon – see why here:

More to come from out Parisian food adventure – leave a comment to let us know your favorite Paris feast!