Home › Art › Happy 4th Of July! Dance Your Stars Off! Have A Burger To Celebrate!

Happy 4th Of July! Dance Your Stars Off! Have A Burger To Celebrate!

Well, 241 years in, still a work in progress, and more than ever, we all share the same planet so here’s to mutual respect and shared goals!

July 4th is the day Americans celebrate a new way of governing – so we will see lots and lots of BBQ pictures, fireworks, and all around celebrations across the country…

As I said, lots of celebrating across the country, with lots of different food, but one kind seems to dominate: 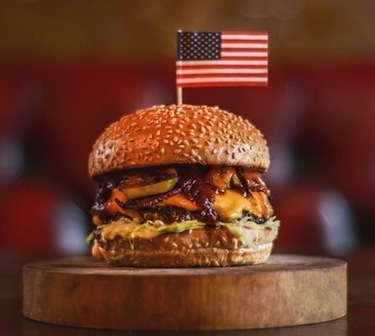 Whether you live in the US, or just want to have a burger, here are recipes for burgers of all shapes and sizes – from all around the world, because we are all in this together:

Like Loading...
‹ Will Farrell And Amy Poehler’s “House” Burns Down! Summer 2017 Bombs On Target!
Los Angeles’s 2000-calorie XXXL Fatburger destroys our Japanese reporter on trip in the U.S. ›