The best way to watch the sun come up across the country is behind the wheel of a car – and that’s exactly what I did – and here is how it looks when you use your Panorama setting while moving!

I wanted to share a trip I took last year, where I got the chance to drive though a part of America that I rarely see. Two-lane highways take you to much different places than interstates do… 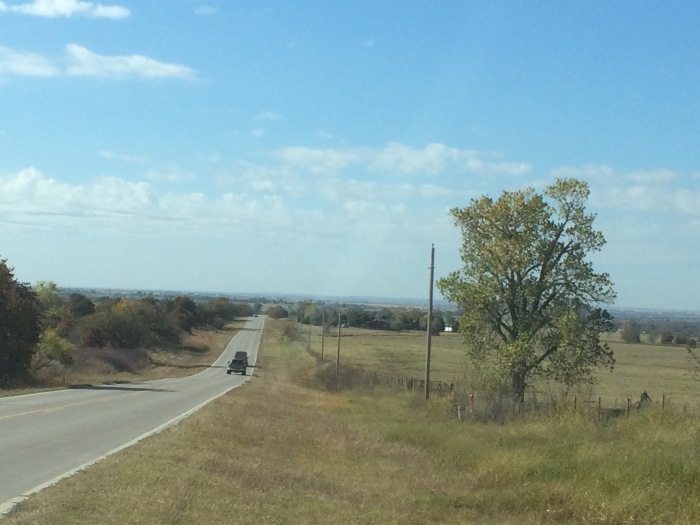 Little did I know when I took this tour of rural Oklahoma that it would factor into the recent Presidential election! 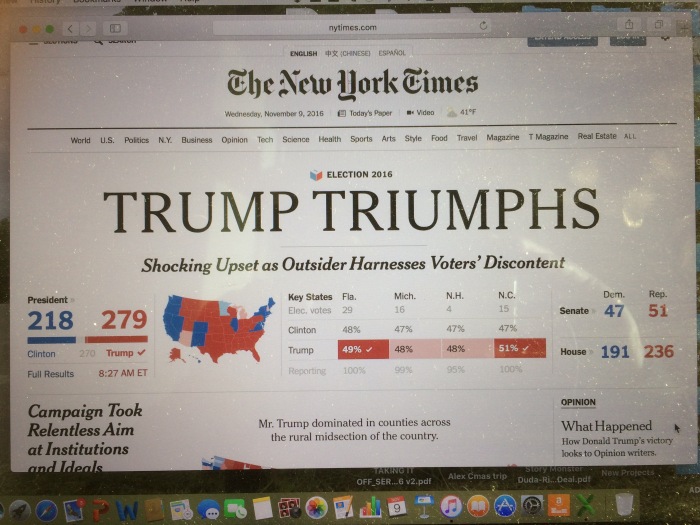 Recent political coverage has focused on why Trump won the Presidency – why more suburban areas supported him, and how rural parts of the US feel left behind in the great technological revolution that has changed our country in the past thirty years.

I live in a big city, Los Angeles, and regularly do work in Chicago and New York as well. Huge metropolitan areas with a vibrant multi-cultural energy, a sense that anything is possible and opportunities are everywhere.

Here is how we all voted on Election day 2016: Blue is of course Democrat, Red is Republican…the darker the color, the more concentrated the victory.

As you can see, vast portions of the country are Republican, while those huge cities I referenced, along with others such as San Francisco, Philadelphia, Atlanta and Seattle, are largely Democrat.

Clinton lost because the big cities didn’t turn out in the same numbers as in 2012, and Trump scored big victories in small towns like this:

As the election map shows, this is where many of those Trump voters live: in small communities in every single state. While there are far fewer people living in these smaller communities, when you add them up they have a definite impact, as we just saw in the election.

I point this out because most media outlets admitted to missing the “silent protest” that was underway across the country. Perhaps the cause of that is simple: they never really go there – or pay much attention just how different life is in these smaller communities. 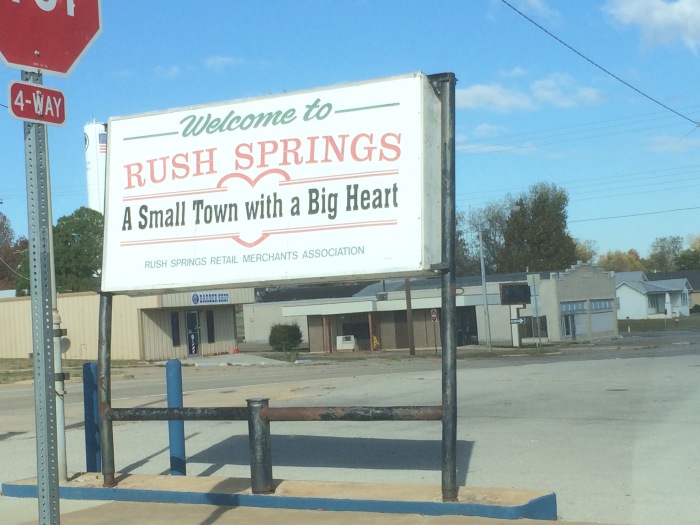 I was in Oklahoma last year meeting with a terrific young band for a possible TV project…they live about fifty miles from Oklahoma City, in the heart of small-town America:

The population of Rush Springs was 1,231 at the 2010 census. The town promotes itself as the “Watermelon Capital of the World.” Oklahoma is dotted with small towns like these, and they all looked very similar to me:

I had the chance to spend a day driving around the small backroads of Oklahoma – and these small towns are NOT thriving, they are not part of the technological revolution that has transformed much of our country…

In fact, what I drove through were a collection of slowly dying towns – a few gas stations, convenience marts and auto body shops scattered among blocks of abandoned businesses… 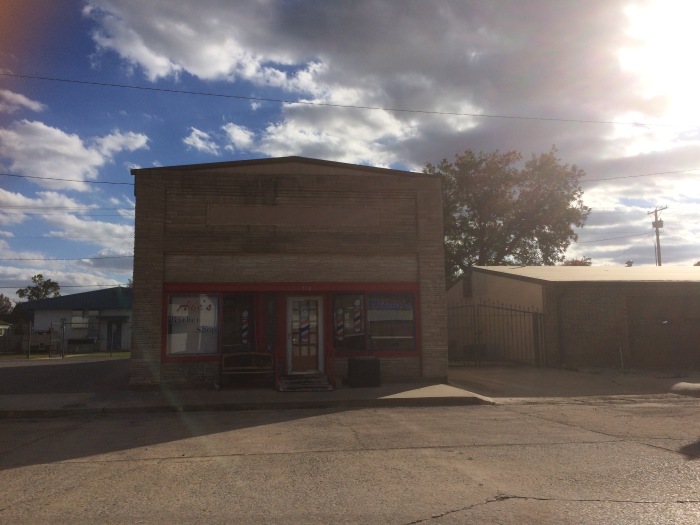 The rural part of Oklahoma that I drove through offered two starkly different sights: gorgeous skies – and empty buildings.

I spoke to many people while I was there: residents of various ages – hotel clerks, gas station attendants, restaurant servers…just small talk that always led to the same comments from them: they saw their towns slowly dying away, and nothing was ever going to change that fact.

In the town of Lawton, there was more activity, since the town supports a military base. I stopped for a bite to eat – of course, it was a burger stand.

Welcome to McKenzie’s Burgers in Lawton, Oklahoma – a great restaurant located in the county seat of Comanche County – 87 miles southwest of Oklahoma City. 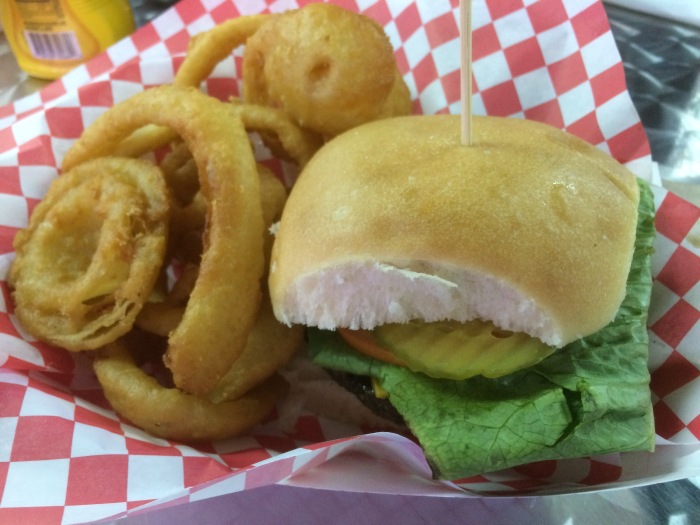 The food was great! McKenzie’s has been open for seventy-three years, serving locals as well as Military personnel from Fort Sill, which is located just outside of town. The customers I saw were, in general, a bit older than you may expect in a hamburger stand, and of course young soldiers as well… 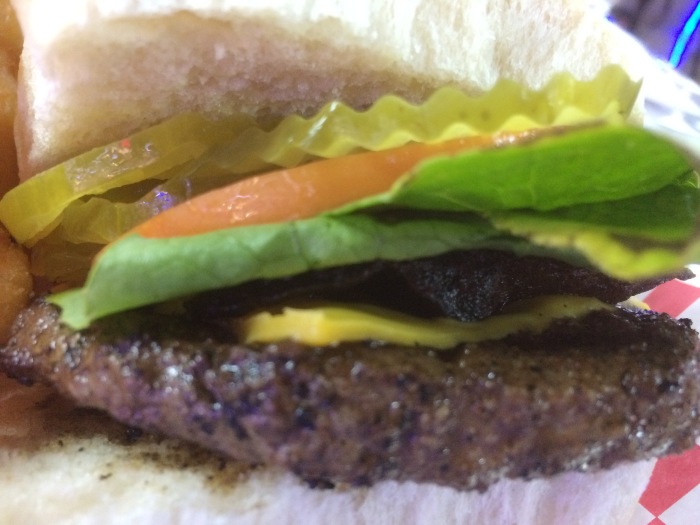 I got to hang out with a wide variety of people, especially since I was with a couple of young band members. 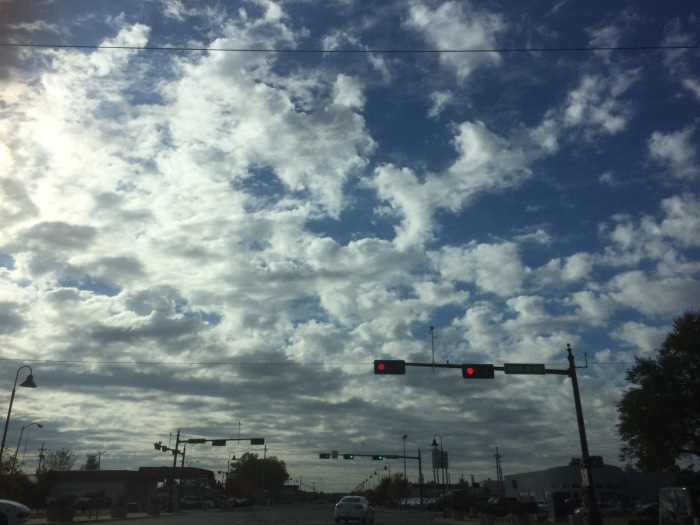 I got the sense from everyone I spoke with that they feel disconnected from the rest of the country…they spoke matter-of-factly about a political system that didn’t pay much attention to them, except in ways that were obtrusive: changes in social services, taxes – the stuff everyone complains about, but for them, government was very far removed from their lives – except in negative ways…

That is the underlying tone of a terrific new book, which involved a road trip through the deep south:

Paul Theroux is the legendary Travel Writer who has a keen eye for detail, and a sense of perspective that is terrific.

Here are a few pictures from the book…see how similar they are to what I saw?

Theroux is a great Writer, and he captures the voices of a part of America that also feel overwhelmingly left behind, with no help on the way. One of the great insights from Theroux is that the Clinton Foundation spends hundreds of millions to help impoverished African nations, but nothing here.

This is not to indict the Democrats – I AM ONE. I am just pointing out that there are people in our country who worry that our country has left them behind – and Donald Trump’s message resonated. To fail to understand that is to ignore one of the messages of the election of 2016.

Click here for more great insight from Paul Theroux about people in the “Deep South”:

I had a great visit to Oklahoma, but as I thought of what happened in the 2016 Presidential election, I couldn’t help thinking just how much Donald Trump’s message of making America great again probably resonated here. 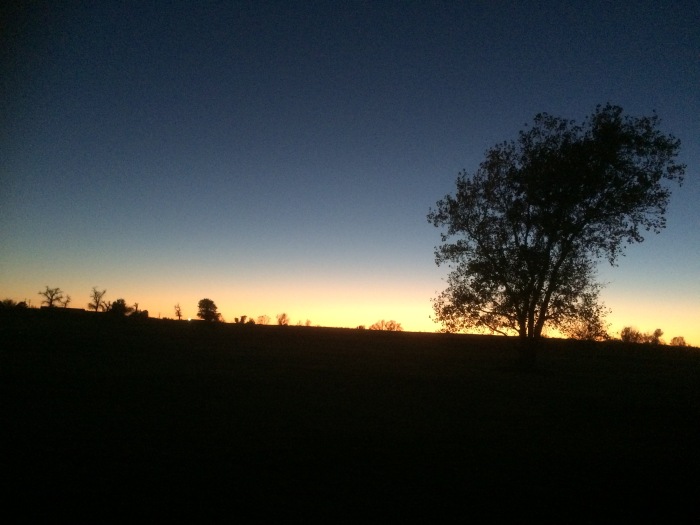