Home › Art › Bite Into The “Moonstruck” Eggs In A Hole Recipe! “Dinner And A Movie” Says “Snap Out Of It!” Cher Eats! Nic Cage Chews Scenery!

Bite Into The “Moonstruck” Eggs In A Hole Recipe! “Dinner And A Movie” Says “Snap Out Of It!” Cher Eats! Nic Cage Chews Scenery!

“Dinner And A Movie” With Cher!

Anyone hungry? I am, and in the spirit of my “Dinner In A Movie” series, it’s time to share a recipe that screams out, “I need some eggs!” I could make the beautiful eggs over easy from the film “Big Night”, a perfect way to end that movie (more on that later), or I can have eggs the way Olympia Dukakis makes them in “Moonstruck!” This terrific comedy is infused with food, and I wanted to share that with you.

This terrific romantic comedy tells the story of Loretta Castorini, who decides to marry the man who isn’t “of her dreams”, but he’s a safe choice.

Cher won the Academy Award for her performance – a woman who decides to do the safe thing, then finds herself in the arms of her fiancé’s estranged brother Ronny Cammareri. Nicholas Cage is at his manic, crazy best as the brother – he’s a volatile baker who lost his hand in a tragic baking accident. Yes, he did.

Food permeates this movie, which opens in a neighborhood restaurant where Loretta accepts Johnny’s proposal, and ends in the family kitchen where she embraces Ronny instead. Cher and supporting actress Olympia Dukakis both won Oscars for their performances. 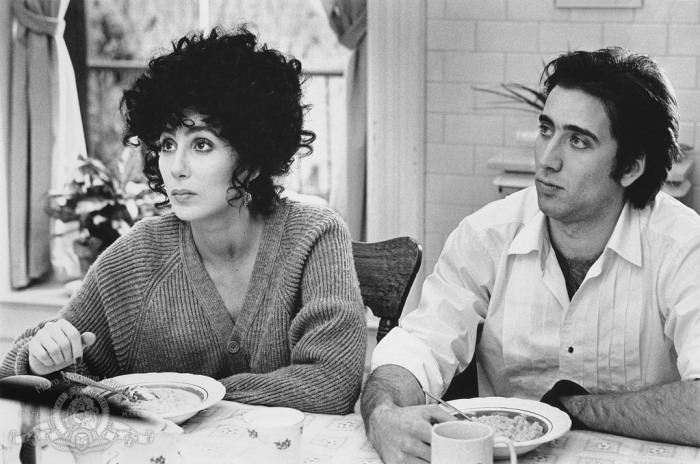 The kitchen is a central location for the film, and I love the moment when Nicolas Cage professes his love of Cher…and her now iconic reaction:

Ronny Cammareri: I love you.
Loretta Castorini: [slaps him twice in the face] Snap out of it! 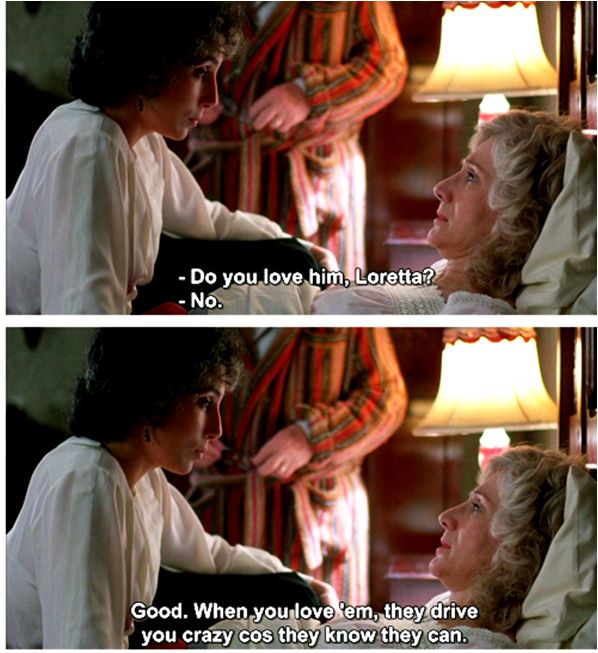 Olympia Dukakis is terrific as the Mother who tries to give her daughter some advice about love.

And of course, Cher is a good catholic, so after sleeping with her fiance’s brother she goes to church to confess her sins.

Loretta Castorini: Bless me, Father, for I have sinned. It has been two months since my last confession.
Priest: What sins have you to confess?
Loretta Castorini: Twice I took the name of the Lord in vain, once I slept with the brother of my fiancee, and once I bounced a check at the liquor store, but that was really an accident.
Priest: Then it’s not a sin. But… what was that second thing you said, Loretta? 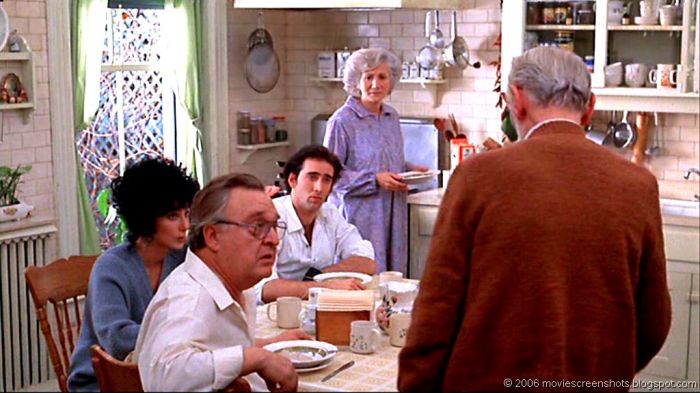 Of all the great food in the movie, I particularly loved the scene when Olympia Dukakis makes her daughter Cher a real italian breakfast – behold: 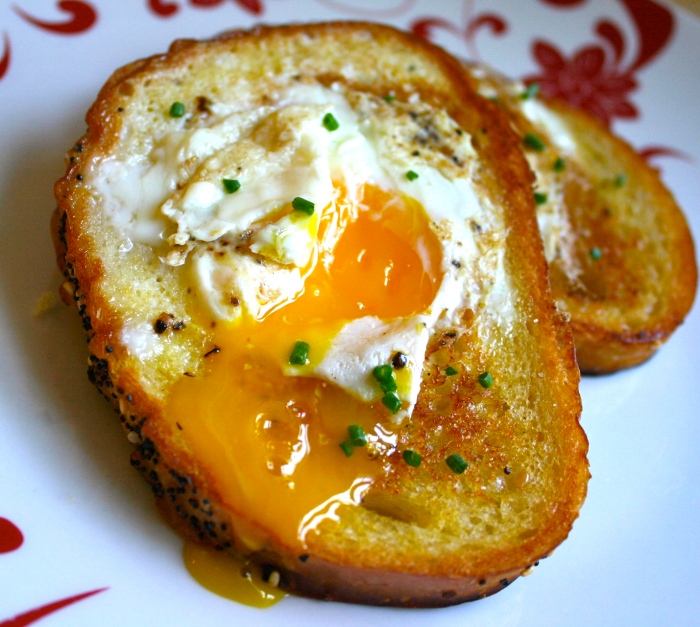 Yes, these are also known as “eggs in a hole”, and in the film, they take the time to show us how they are made…here is the recipe:

For each serving, cut a hole in the slice of bread with a biscuit cutter. Melt a hunk of butter in a heavy, cast-iron skillet over medium-high heat. When the foam subsides, add the bread. Break the egg and carefully slip it into the hole in the bread. Salt and pepper it to your taste. Fry until the bread is golden brown on the bottom and the egg is set on that side. Flip over CAREFULLY! Cook until the second side is golden and the egg is set. 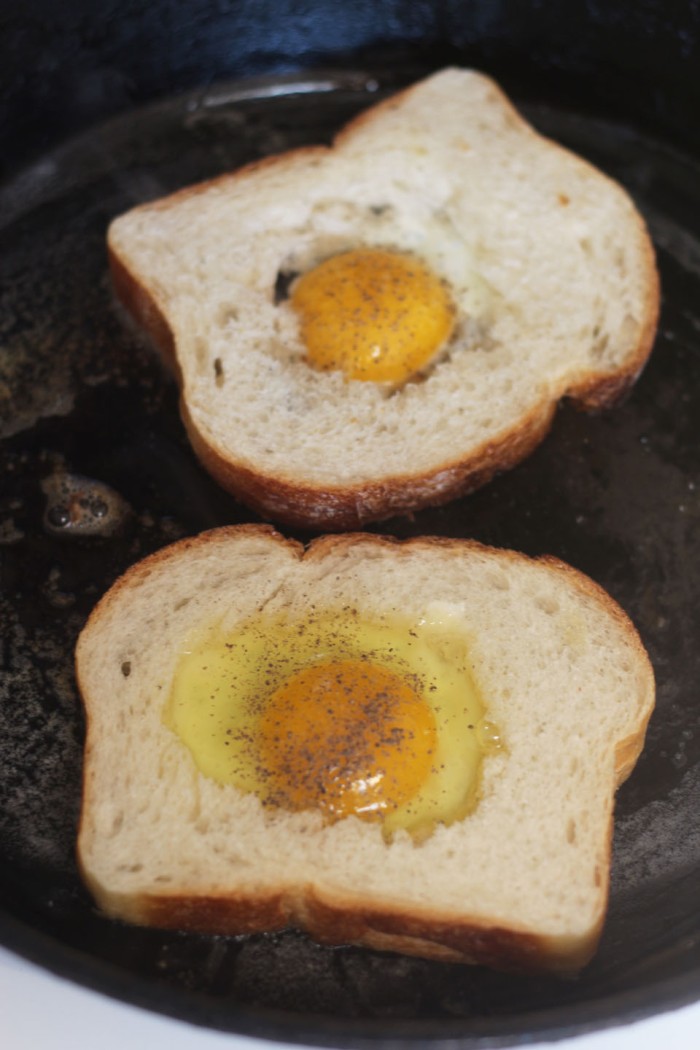 Heat up the tomato sauce in a small sauce pan. Put the egg and bread on a plate and top with a small spoonful of the sauce. Below, someone enchanted it by adding some fried italian sausage and hot peppers as well!

Speaking of eggs, I told you that the great film “Big Night” also has an iconic cooking scene in it involving eggs:

At the end of the film, Stanley Tucci carefully prepares eggs in the kitchen, and near the end his brother, Tony Shaloub enters and they eat…nothing is spoken between them…now of course, earlier in the film they attempt a slightly more dynamic dish: 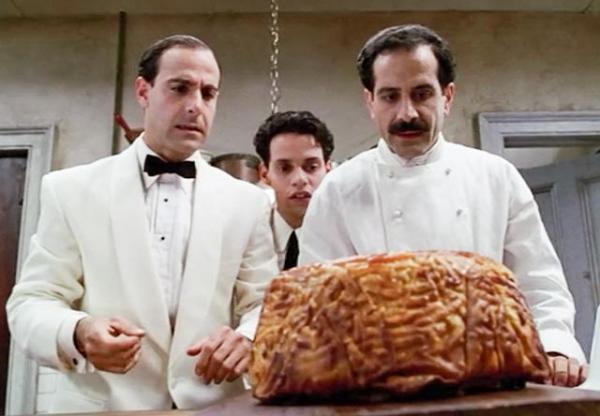 Yes, a “Timpano!” To find out what it is and how to make it, click here:

If you enjoy this story, please share on social media!

I love “dinner and a movie”, and I hope you attempt some of these as well…

Like Loading...
‹ A Touching Eulogy From An Incredible Book About An Entertainment Icon! This “Wednesday Bookmobile” Heads To Hollywood To Celebrate Great Talent!
Learn To Kiss With These Practice Lips! Make Out Pillows! “What The Friday!?!?” Has These Incredible “Test Lips!” ›