Who Cares About Bad Weather! Warm Up With THIS!

Yes, there is “breaking” KFC “double down” news! The “Double Down Hot Dog” is here! Well, ALMOST here….let’s look at the facts:

Remember How It Began?

First, let’s go back a few years – KFC’s Legendary “Double Down” Sandwich: It was a wacky food item that everyone tried once: I know because G4’s “Attack Of The Show” brought fifty of them in to taste live in the studio!

It doesn’t seem that long ago when KFC stunned the food world with their “double down” sandwich: bacon, cheese and creamy sauce stuffed between two pieces of boneless breaded fried chicken, acting as “buns”.

Which had to lead to this: thanks to Huffington Post, who loves this wacky food almost as much as I do, I have this “breaking double down” news:

Yes, the latest “double down” effort has taken out the bacon and cheese and loaded up the chicken buns instead with a hot dog! And it’s a bestseller!

According to HuffPoFood, the “Double Down Dog” is only being sold in the Philippines from January 26-27 and most locations have already sold out!

While the story says it’s only being tested overseas, if there is one thing I can promise you, this food creation will be upon us soon!

And KFC isn’t just abusing the hot dog, look at what they are offering overseas as well: 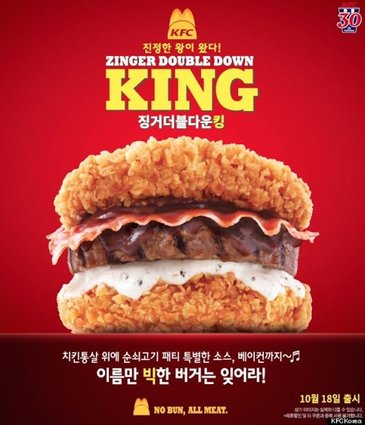 The “Double Down KING Burger!”

Now, we already know that the Double Down is made of two pieces of fried chicken, bacon and cheese – but in Korea, they have an addition which they call the “Zinger”!

And the “Zinger” is a hamburger patty!

Fast food history made once again!