It is, quite simply, the greatest film of all time: 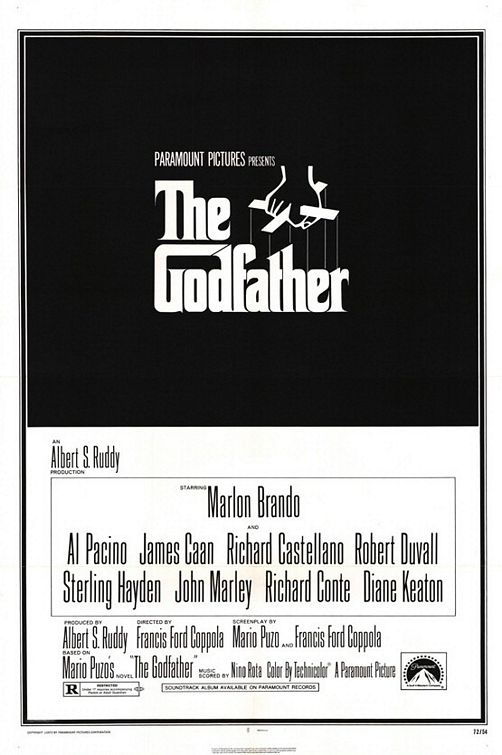 A masterpiece that gets even better and better with repeated viewings, “The Godfather” was a cultural sensation when released in 1972, and won a slew of Oscars including Best Picture – and it achieved the rare feat of returning for a sequel that won Best Picture in 1974! 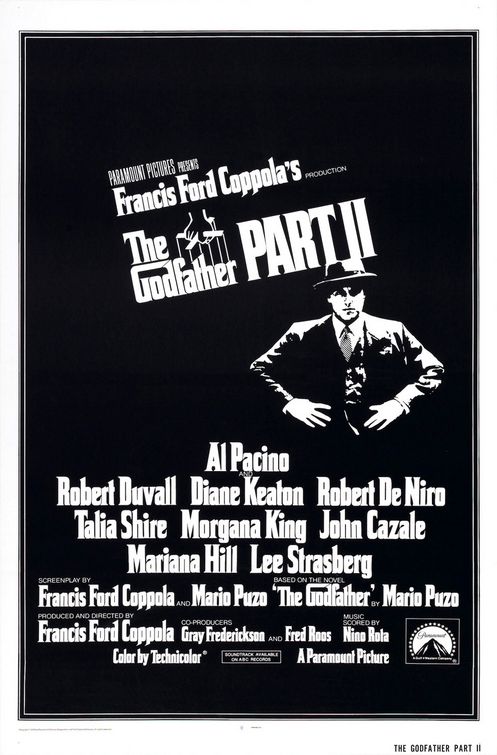 I have shared stories about this film before: like the astonishing fact that the horse’s head in the film mogul’s bed was REAL: 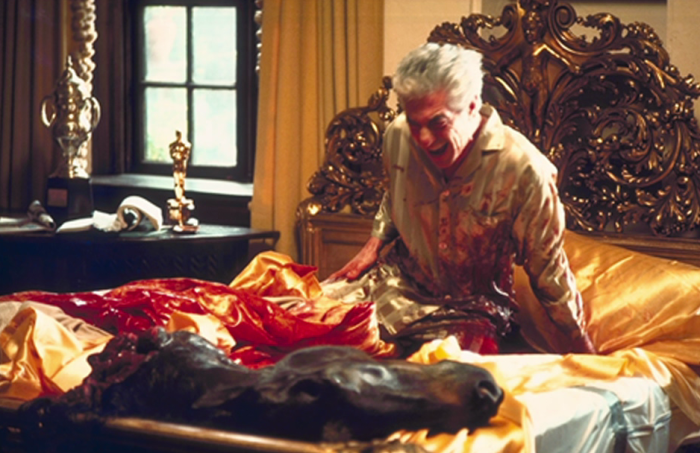 And of course, I shared with you the recipe for the delicious meatballs that Clemenza makes for his guys when they have gone “to the mattresses”: 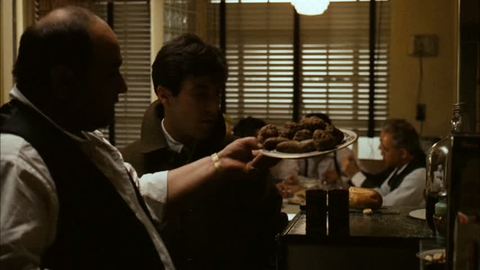 For the scene where Clemenza is cooking, Francis Ford Coppola originally wrote in the script, “Clemenza browns some sausage”. Upon seeing this, Mario Puzo crossed out “browns” and replaced it with “fries”, writing in the margin, “Gangsters don’t brown.” If you need a quick food fix, you can click on my story here and get the entire recipe now: 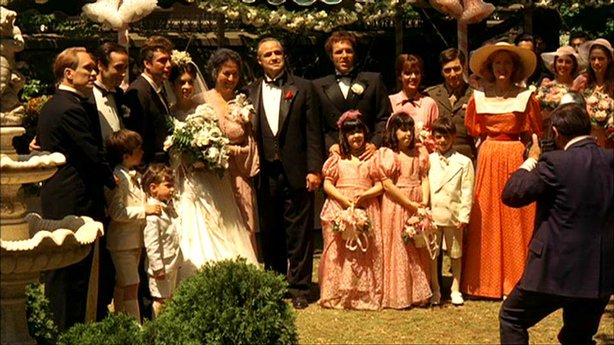 The Godfather Cast!
During pre-production, Francis Ford Coppola shot his own unofficial screen tests with Al Pacino, James Caan, Robert Duvall, and Diane Keaton at his home in San Francisco. Robert Evans was unimpressed by them and insisted that official screen tests be held. 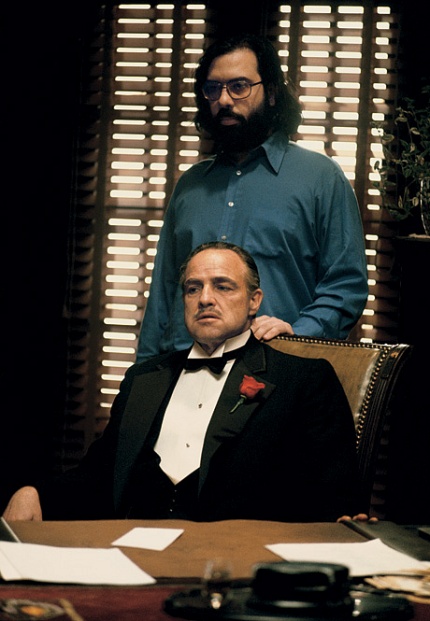 The studio spent $420,000 on the screen tests but in the end, the actors Coppola originally wanted were hired. 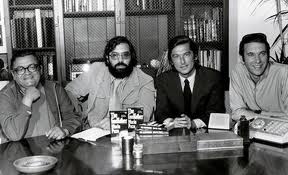 It is well known that Coppola and studio head Robert Evans did not get along. Therefore, Coppola had to fight for many of his casting choices throughout the process.

According to the great website IMDB, Warren Beatty, Jack Nicholson, and Dustin Hoffman were all offered the part of Michael Corleone. Suggestions of Alain Delon and Burt Reynolds were rejected by Francis Ford Coppola. Paramount production chief Robert Evans wanted Robert Redford to be cast in the part, but Coppola demurred as he was too WASPy. Evans explained that Redford could fit the role as he could be perceived as “northern Italian”! 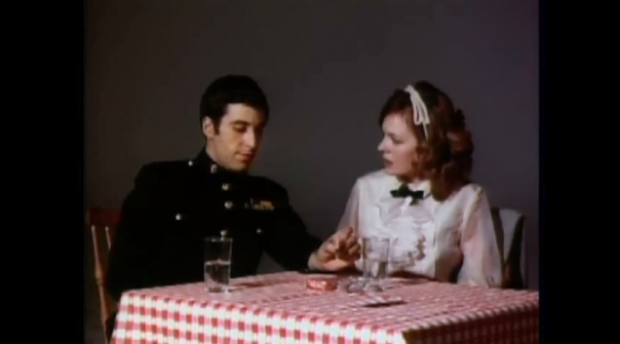 Before being cast as Michael, Al Pacino was committed to starring in the film “The Gang That Couldn’t Shoot Straight”. Coppola, in a 2003 “Cigar Aficionado” interview, said that Paramount pulled some strings and managed to get Pacino released to make “The Godfather” instead. This was in spite of their initial concerns over casting him in the role. 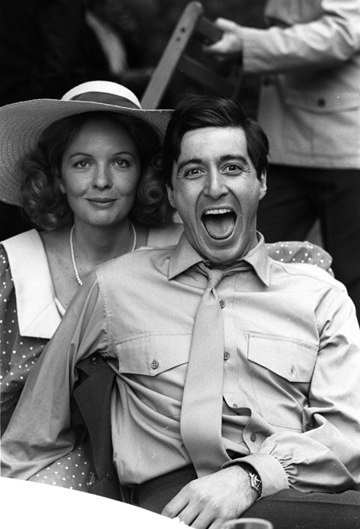 There was, of course, one other legendary audition for the part of Michael Corleone – that would later result in the Actor becoming Don Corleone himself! 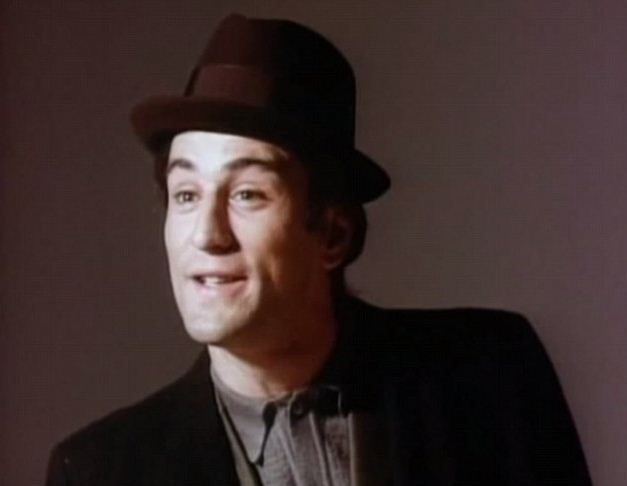 Long before he achieved stardom as Travis Bickle in “Taxi Driver”, Robert De Niro tested for both Michael and Sonny and was almost cast as Carlo! But guess what happened instead! De Niro was offered Pacino’s former role in “The Gang That Couldn’t Shoot Straight”! And of course, Coppola cast DeNiro as the young Don Corleone in “The Godfather Part II” just two years later!

Here is just over twenty seconds of Robert DeNiro’s audition for “The Godfather” – in the role of Sonny! 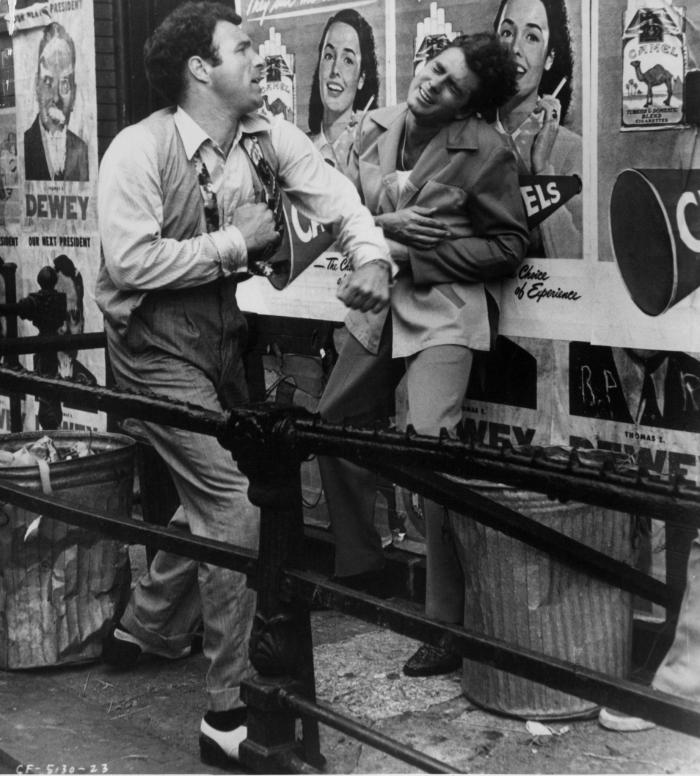 Gianni Russo went the extra mile to get the role of philandering son-in-law Carlo Rizzi, getting a camera crew to film his own audition and send it to the producers. However, Marlon Brando was initially against having Russo, who had never acted before, in the film; this made Russo furious and according to legend he went to threaten Brando! 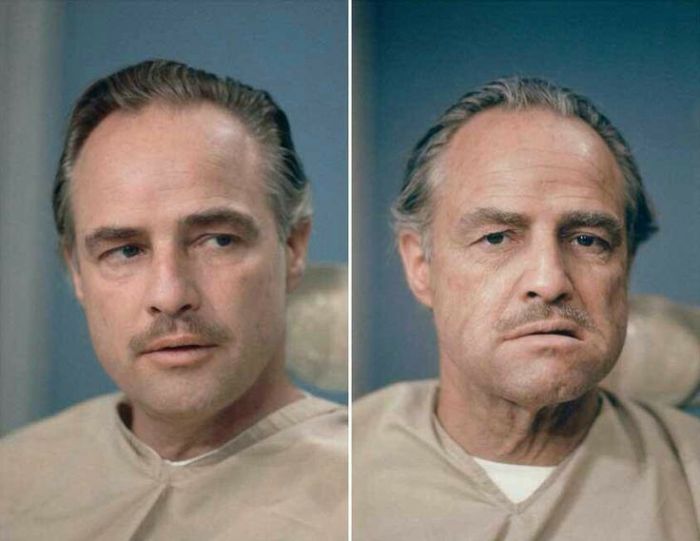 However, this proved to be a blessing in disguise: Brando thought Russo was acting and was convinced he would be good for the role! 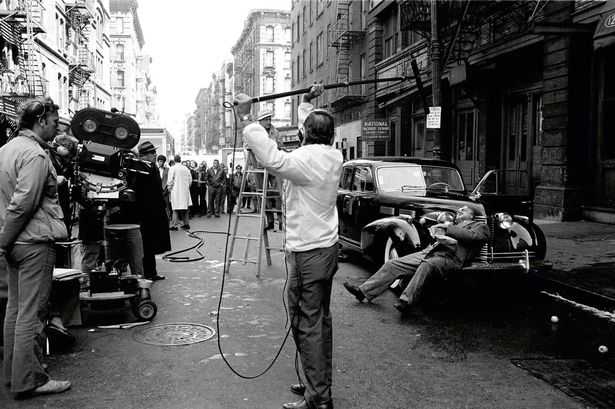 I love these behind-the-scenes photos, like this one showing the attempted murder of Don Corleone. Although there are many claims of real Mafiosi as cast members Francis Ford Coppola stated in a May 2009 interview with Howard Stern that no organized crime members were cast or used as consultants. The closest Coppola claims to have come to a real gangster during production, at least to his knowledge, was an interaction with Lenny Montana, who played Luca Brasi. 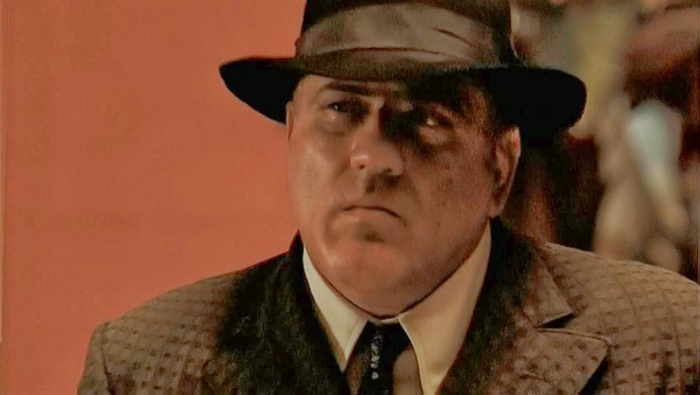 Coppola said when he asked if Montana knew how to spin the cylinder of the revolver Montana replied “You kiddin’?”.

A young Sylvester Stallone auditioned for the film as well, but was not cast. Stallone instead decided to try his hand at writing, first completing the screenplay for the “The Lords of Flatbush”, and then of course “Rocky”. He starred in the film alongside Talia Shire, who portrays Connie Corleone in “The Godfather.” 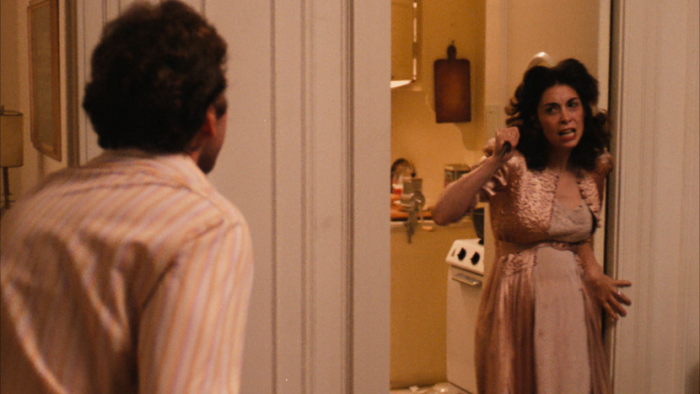 Talia Shire was, of course, Coppola’s sister – and he was reluctant to let her audition for the role of Connie. He felt she was too pretty for the part and did not want to be accused of nepotism. Only at Author Mario Puzo’s request did she get the chance, and the rest is history! 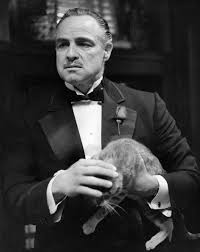 Here’s another great piece of trivia thanks to IMDB: the cat held by Marlon Brando in the opening scene was a stray the actor found while on the lot at Paramount, and was not originally called for in the script. Brando held the cat so close that its purring muffled some of his dialogue, and most of his lines had to be recorded again later! 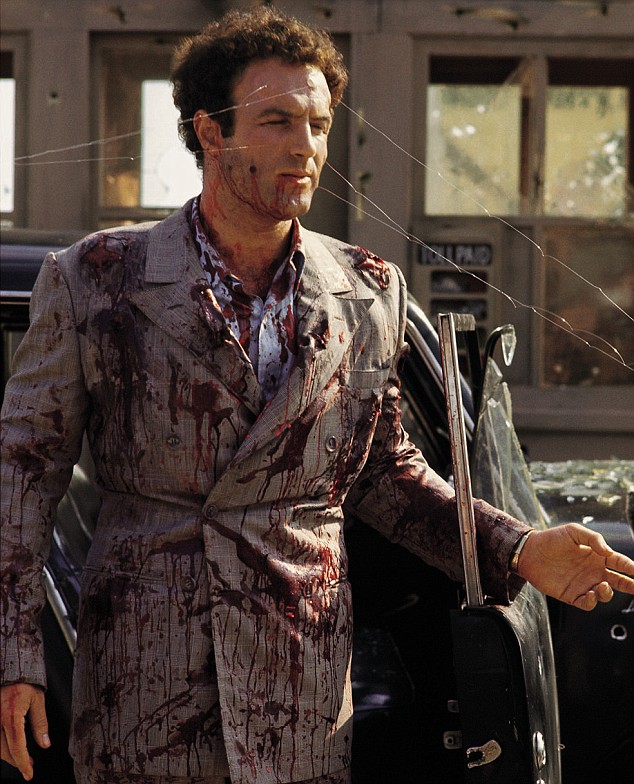 James Caan originally heard the phrase “bada-bing!” from his acquaintance, the real-life mobster Carmine Persico, and improvised its use in the film.

Known as one of the world’s greatest Actors, and notoriously difficult to work with, Marlon Brando was also quite the practical joker! 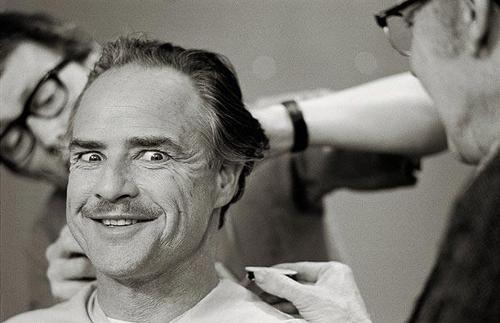 During an early shot of the scene where Vito Corleone returns home and his people carry him up the stairs, Marlon Brando put weights under his body on the bed as a prank, to make it harder to lift him! 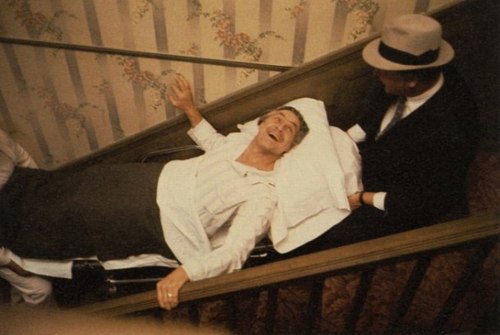 Of course, once you have finished your “Godfather” dinner in a movie, you want to hear more stories about how they made the film…well, it was easy: everyone wore cue cards! 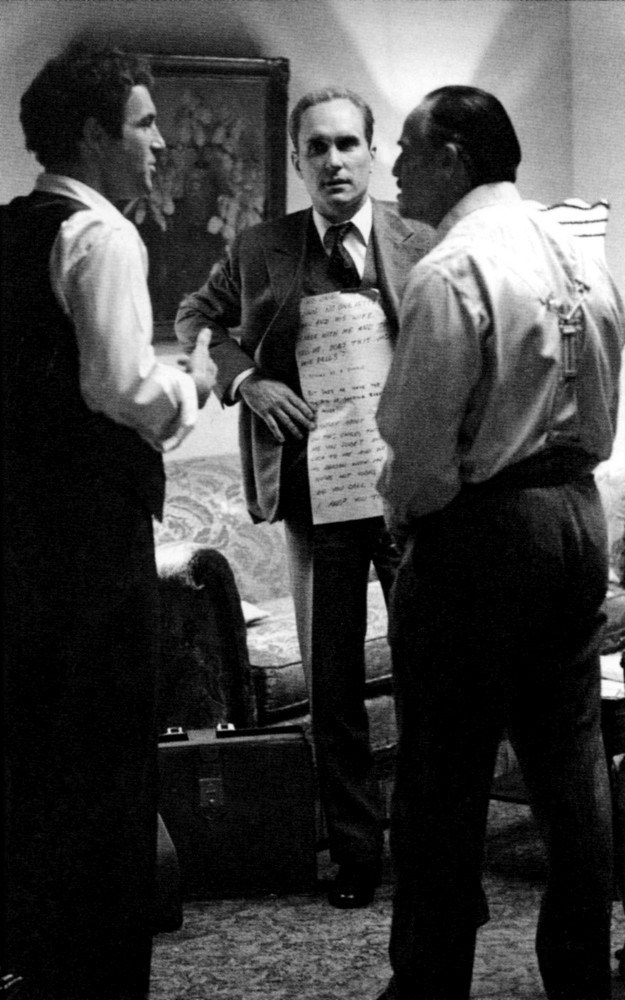 That’s right, check out Robert Duvall WEARING Marlon Brando’s lines! And of course, to read all about the crazy behind-the-scenes stories on the making of “The Godfather”, just click on my story here: