The Harvey Weinstein verdict was revealed today, but this terrific true-life thriller tells the story of his behavior and the cover up that protected him for so long

“In the end, the courage of women can’t be stamped out. And stories – the big ones, the true ones – can be caught but never killed.”

Ready for an incredible, true-life spy thriller? Ronan Farrow lived it – and wrote a terrific book about it!

Ronan Farrow is Mia Farrow’s son, and he’s a Lawyer, a former TV Host, and a Pulitzer Prize winner…and he has written the most compelling #MeToo thriller of the year – because it’s all true! 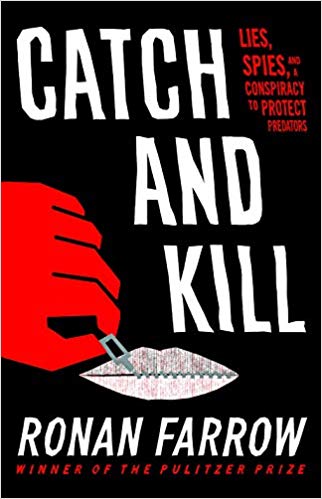 “Catch and Kill: Lies, Spies, and a Conspiracy to Protect Predators”

This Wednesday Bookmobile takes you on an investigative thrill ride as Farrow does what Journalists had been unable to do for decades: get evidence to prove that Movie Mogul Harvey Weinstein stalked and harassed young women and was a sexual predator!

Here’s how amazon describes the book:

In a dramatic account of violence and espionage, Pulitzer Prize-winning investigative…