“I’ll Be Gone in the Dark: One Woman’s Obsessive Search for the Golden State Killer”

One of California’s most notorious serial rapists and a serial killer as well – The Golden State Killer – is the subject of a fascinating story about obsession, from the late writer Michelle McNamera.

“I was married to a crime fighter for a decade,” writes Patton Oswalt in describing his wife, Michelle McNamara. “She was born with a true cop’s heart and mind… She made everything about me and everyone around her better. And she did it by being quietly, effortlessly original.” When Michelle died in the spring of 2016, she was still hard at work on her debut book.

Since this posting, this Killer has been caught! Here is a link to that story:

Now, here is the story of Patton’s late wife and her incredible book!

The book is a fascinating story of obsession, not only the Authors but the Detectives trying to solve the crimes as well.

In the 70’s, a horrific serial Rapist terrorized Sacramento and surrounding areas, committing 49 rapes. Based on years of police work, he was also found to be responsible for a dozen murders in Central and Southern California, the last in 1986. Now more than thirty years later, an incredible book about the attempts to find this killer.

McNamera was married to Actor/Comedian Patton Oswalt, who is now touring to promote his late wife’s book.

McNamara died unexpectedly on April 21, 2016. Following her unexpected death, her husband explained that the book would be finished with the help of her colleagues.

“She left behind an amazing unfinished book, about a horrific series of murders that everyone — including the retired homicide detectives she worked with — was sure she’d solve. The Golden State Killer. She gave him that name, in an article for Los Angeles Magazine. She was going to figure out the real name behind it…”

The Origin Of “The Golden State Killer”…

McNamera came up with the moniker, since prior to that he was known by police as the “East Area Rapist” – EAR. Police admit the lack of a catchy nickname made it more difficult to get the public’s awareness as they struggled to solve the crimes.

Oswalt worked with McNamera’s colleagues to finish the book and he is now promoting it – I saw a fascinating conversation with him recently where he discussed the case and his wife’s obsessor with it. 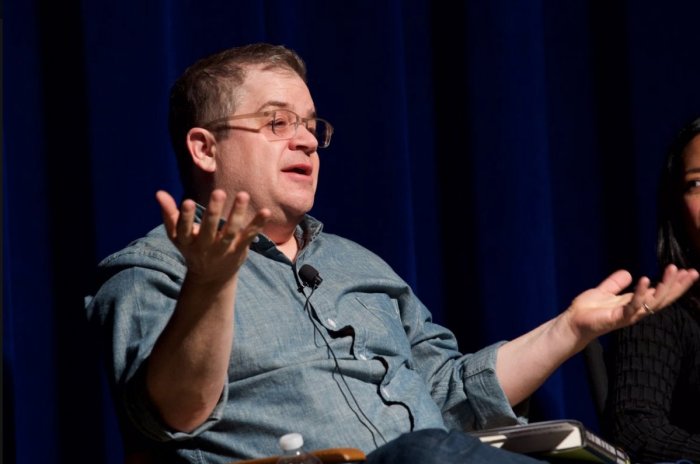 Here is the video from a portion of the conversation from this appearance at a “Live Talks Los Angeles” event in March:

It was a great event, one of many fascinating conversations this group puts on…you can see their entire schedule here:

The book is riveting, and McNamera’s death was a shock to the fans of her “True Crime Diary” website, which is still open…

Oswalt is a great talent, and I posted about him before, specifically about his love of a very obscure horror film:

Yes, he loved “Death Bed – The Bed That Eats!” Click here to find out why:

Let me know if you’ve read the terrific book “I’ll Be Gone In The Dark!”