How did I miss this? Las Vegas is home now to robotic bartenders, who can make mixed drinks and refill your nuts!

As you can see, there has been lots of new coverage, but I missed it all!

The LA Times reported it this way on July 4:

“Two robotic arms have replaced bartenders at the Tipsy Robot at the Miracle Mile Shops. They can’t listen to your woes, but they promise to make you the perfect cocktail.

Tipsy Robot, which opened Friday, claims to be the world’s first land-based bar to deploy robotic bartenders. If the technology sounds vaguely familiar, that’s because it has been used on Royal Caribbean cruise ships.

Here, using tablets, guests select their drinks, which could be as ordinary as a gin and tonic or as fancy as a signature cocktail. You pay the tab by swiping a credit card or giving cash to a human employee.” 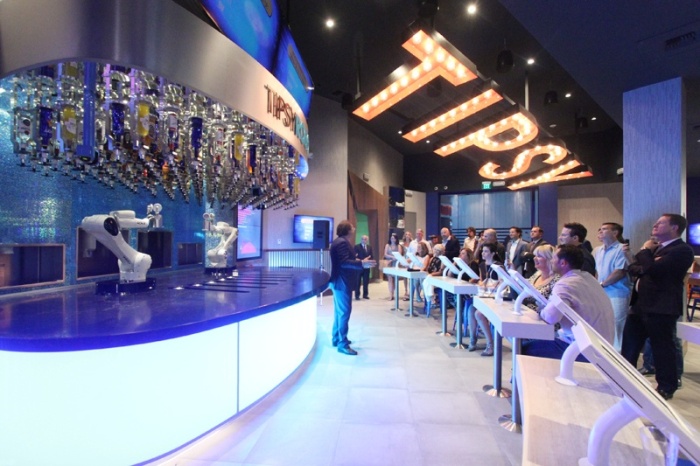 Watch as our Robotic Bartenders mix you up a drink:

The Los Angeles Times reports that it takes the robots 90 seconds or less to prepare each beverage, even if they need to cut a slice a lemon or lime as a garnish!

OK, this will be fun to watch, but I personally need the human interaction of a person who will make me a drink and listen to my tales of woe…or ignore me completely as some do…anyone else into robots?

In China, Robots make ramen noodles, and there is a restaurant where robots serve you as well! Check it out here:

And of course, if you really love robots, then Tokyo is the place for you:

Yes, a bit of Las Vegas in Tokyo, robot style! Giant bikini robot battles every night of the week, see the video here:

Bartender, plug yourself in and make me a drink!