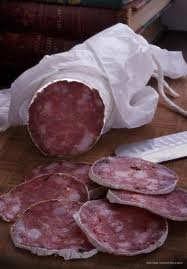 And who wants to make it themselves? Then let’s go with a terrific new cookbook that will help you do just that!

Here is how Amazon describes this great new cookbook: “The craft of Italian salumi, now accessible to the American cook, from the authors of the best-selling Charcuterie.” Oh yes, more on that in a minute, but first, congratulations to Michael Ruhlman and Brian Polcyn for another terrific and unique cookbook!

Michael Ruhlman and Brian Polcyn inspired a revival of artisanal sausage making and bacon curing with their surprise hit, “Charcuterie”. Now they delve deep into the Italian side of the craft with Salumi, a book that explores and simplifies the recipes and techniques of dry curing meats.

YES, THEY TEACH YOU TO DRY CURE YOUR OWN MEAT!

As the sources and methods of making our food have become a national discussion, an increasing number of cooks and professional chefs long to learn fundamental methods of preparing meats in the traditional way.

Ruhlman and Polcyn give recipes for the eight basic products in Italy’s pork salumi repertoire: guanciale, coppa, spalla, lardo, lonza, pancetta, prosciutto, and salami, and they even show us how to butcher a hog in the Italian and American ways.

This book provides a thorough understanding of salumi, with 100 recipes and illustrations of the art of ancient methods made modern and new. Well, how can you top that? Take a look at this:

The picture above, as well as the next one are from Michael’s website – as is this description: “On our trip to Italy, Brian Polcyn and I saw a lot of new cuts we weren’t familiar with, so as soon as we returned, we made plans to break down a couple of pigs Italian style, bringing in chef Jay Denham, who was recently back from five months staging in Italy. We wanted to see how he broke a half animal into primals and we also wanted to learn the culatello cut.”

There is so much great learning here, as well as great eating at the end of the process! You have to check out Michael’s terrific website, featuring the beautiful food photography of his wife Donna:

So get the new book, and while you are shopping, take a dip into classic Ruhlman as well!

Michael Ruhlman was one of my Hosts for “Cooking Under Fire”, my PBS series from 2004 – along with Chef Ming Tsai and Chef Todd English. This picture was taken by Michael Ansell for WGBH-TV Boston. I was able to observe Michael up close, and I also saw how inspiring he was to the young Chefs competing on the series.

And yes, this is a picture of me behind the camera as we were filming the competition….

Michael was the perfect choice to host a competition between Chefs, since he wrote what is considered the “bible” of cooking school books!

“The Making Of A Chef” by Michael Ruhlman.

In the winter of 1996, Michael Ruhlman donned hounds-tooth-check pants and a chef’s jacket and entered the Culinary Institute of America in Hyde Park, New York, to learn the art of cooking. His vivid and energetic record of that experience, “The Making of a Chef”, takes us to the heart of this food-knowledge mecca. Here we meet a coterie of talented chefs, an astonishing and driven breed.

This book captures the life of a student learning the craft of cooking. Many of the young chefs on “Cooking Under Fire” told me they were in awe of Ruhlman, and treated his book like their bible, a way to understand how to master the complexities of cooking school… 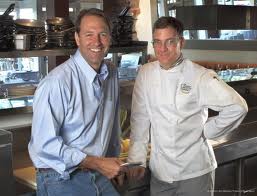 It is packed with useful cooking information, gorgeous photography by his wife Donna, and lots of perspective and opinion. If you’ve ever wanted to cook, this book shows you what it takes to master the craft… 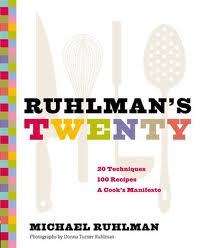 Ruhlman has a number of great books, including “Twenty”, which distills all of cooking into 20 fundamental techniques, illustrated with 100 recipes, but “The Making Of A Chef” was where it all began!

And now, witht he release to “Salumi”, he is back to offering a unqiue perspective on food – just as his previous collaboration “Charcuterie” did…

Without the faintest hint of apology, Ruhlman and Polcyn present an arsenal of recipes that take hours, and sometimes days, to prepare; are loaded with fat; and, if ill-prepared, can lead to botulism.

Well, with that as Amazon’s introduction, how can you NOT jump in? Serious, if you are passionate aobut food, how can you not want to try something this unique and time-honored?

The result is one of the most intriguing and important cookbooks published this year. Ruhlman (The Soul of a Chef) is a food poet, and the pig is his muse. On witnessing a plate of cold cuts in Italy, he is awed by “the way the sunlight hit the fat of the dried meats, the way it glistened, the beauty of the meat.” He relates and refines the work of Polcyn, a chef-instructor at a college in Livonia, Mich., who butchers a whole hog “every couple weeks for his students.”

Together, they make holy the art of stuffing a sausage, the brining of a corned beef and the poaching of a salted meat in its own fat. An extensive chapter on pâtés and terrines is entitled “The Cinderella Meat Loaf” and runs the gamut from exotic Venison Terrine with Dried Cherries to hearty English Pork Pie with a crust made from both lard and butter.

And while there’s no shortage of lyricism, science plays an equally important role. Everyone knows salt is a preservative, for example, but here we learn exactly how it does its job. And a section on safety issues weighs the dangers of nitrites and explains the difference between good white mold and the dangerous, green, fuzzy stuff.