This week’s Kelly Clarkson Show had one of my favorite moments ever: a “dream come true” for a young Artist!

That’s why these “Songs For Sunday” include one written all about John Cena!

Here’s how it all came together: South African singer Sho Madjozi was on the show to perform her viral song called “John Cena” – all about the Wrestler-turned-Actor.

Kelly set up the surprise by flying Madjozi to Hollywood from South Africa to interview her about the song, and her passion for Cena…Sho admits she’d never met Cena, but wrote the song because she had grown up in South Africa with a single TV that used to get wrestling shows starring the Actor!

Here’s what happened next: 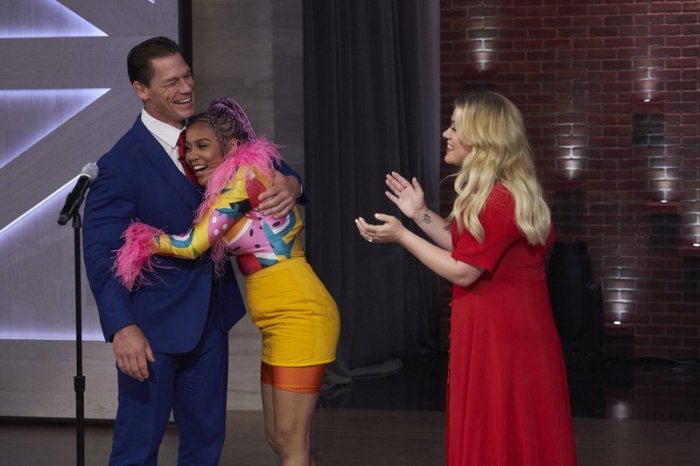 I love this surprise! Cena came across as so warm and funny, and Sho Madjozi is a phenomenal performer as well…bravo to Kelly and The Kelly Clarkson Show for pulling this off!

It’s just another great moment in the show, like this #Kellyoke song, when Kelly covers Selena Gomez’s hit song “Come & Get It”:.

Kelly begins every episode with a #Kellyoke song, and this week she also
covered Taylor Swift’s pop single “Delicate”:

I’ve been sharing these #Kellyoke moments, and here is a link to many others to enjoy as well:

Remember: there is an ALL-NEW Kelly Clarkson Show every weekday – if you don’t know what time it airs in your town, click the show’s Facebook page here and they will help you find it!

Leave me a note and let me know what you think of this “John Cena Surprise!”

Like Loading...
‹ Give Me An “A”! Ten Classic Films That Begin With “A”! Movies “A-Z”!
“Attack Of The Doc!” You Can Be Part Of This “Attack Of The Show” Documentary! A “Cult Movie Monday” Participation! ›