Time to celebrate a classic genre of 70’s film, and celebrate two women who not only broke racial barriers by starring in these films, but they scored big at the box office as well!

In the 70’s, blaxploitation films were the rage, with such classics as “Shaft”, “The Mack” and “Cotton Comes To Harlem” leading the way…

The success of this urban action genre led to a series of hit action films with WOMEN as the stars – breaking a lot of barriers at the same time – and none were bigger than Pam Grier!

Pam Grier burst onto the scene (more in a moment on that) and became a star as “Foxy Brown” – who had attitude, confidence, and street smarts – and she could kick ass when she needed to as well – as “Bobbi” is about to find out!

Bobbie: Listen skinny, before you start talking tough, I’d better warn you I’ve got a black belt in karate. So why don’t you get out of here quietly, while you still got some teeth left in that ugly face?

[Foxy knocks her down with a barstool]

Foxy Brown: And I’ve got MY black belt in barstools! 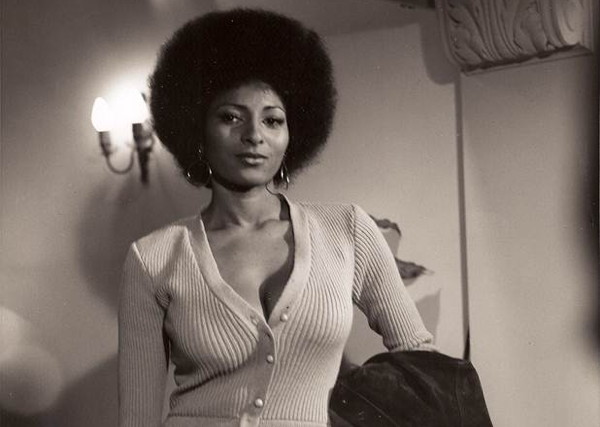 Here’s the very succinct – and very descriptive – description of “Foxy Brown” on IMDB: “A voluptuous black woman takes a job as a high-class prostitute in order to get revenge on the mobsters who murdered her boyfriend.”

The Rise Of Pam Grier!

Pam Grier got her start as a “party goer” in “Beyond The Valley Of The Dolls”, but she broke out big in Director Jack Hill’s classic of exploitation, his “women in prison” epic, “The Big Doll House!”

“They Caged Their Bodies – But Not Their Desires!”

These were classic exploitation films that played every drive-in in America – sexy, crude “women in prison” films – a popular genre that made tons of money at a time when exploitation was getting more daring…and Pam Grier stuck out and made a big impression on the crowd!

This sweltering mix of hot young women – angry, violent and mostly naked – in prison was very popular at the time, and her classic “Black Mama White Mama” was a classic of the genre…

You can see more about this classic piece of 70’s exploitation here:

Grier used her popularity in this film to go on to star in one of the first “blaxploitation” films of the era, called “Coffy”…. 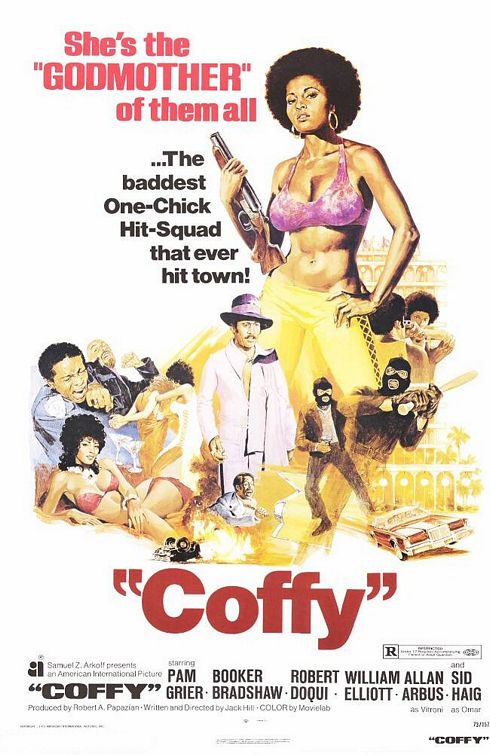 This low budget, violent action film was such a success that a sequel was inevitable. According to director Jack Hill – yes, the genius behind “Big Doll House”, “Foxy Brown” was originally intended to be a sequel to his “Coffy”, and in fact the working title of the film was “Burn, Coffy, Burn!”

However, American-International Pictures decided at the last minute it didn’t want to do a sequel, even though “Coffy” was a huge hit. So a new action star was created, “Foxy Brown!” Pam Grier’s rise to stardom was confirmed, as “Foxy Brown” was a big hit! 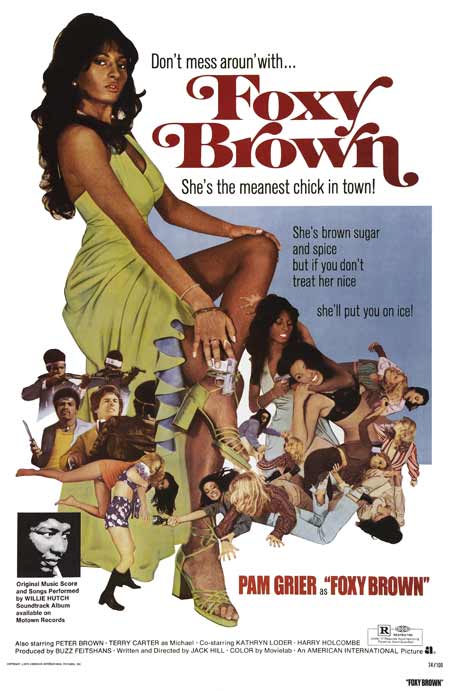 Director Quentin Tarantino was such a fan of Pam Grier and her iconic action status that he made “Jackie Brown” just so she could star in it – and made her a leading lady again! 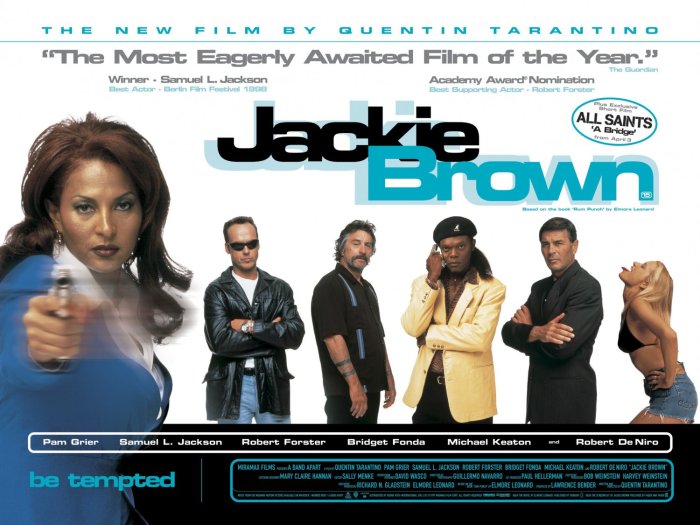 Pam Grier was the best known “Blaxploitation queen”, but there was another leading lady kicking ass and taking names as well….and her name was:

Here’s the story of Tamara Dobson: she was a young actress in Hollywood, with only two small parts to her credit…then, because everyone was looking to take advantage of “Foxy Brown”‘s success, she got cast as the lead in a new action movie – “Cleopatra Jones”! That is the story of Tamara Dobson in a nutshell – a 6’ 2″ model who overnight became one of blaxploitation’s biggest stars! 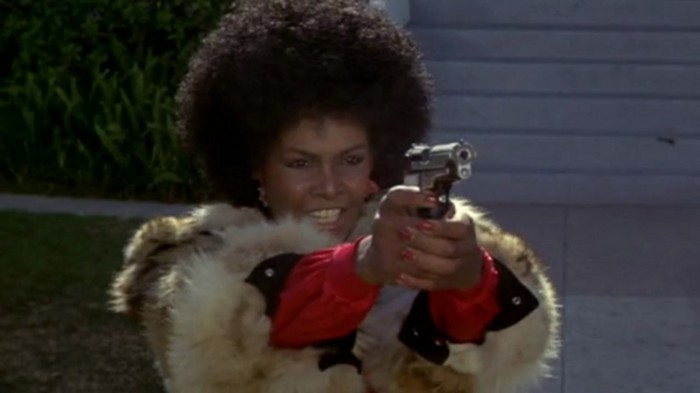 Oh as you can tell, Shelley Winters doesn’t just chew up the scenery, she beats the hell of it as well!

There was one sequel, “Cleopatra Jones And The Casino Of Gold” – in hindsight, it sounds like an earlier incarnation of an Indiana Jones movie!

Even though “Cleopatra Jones” was a huge hit, Tamara Dobson wasn’t able to capitalize on that – the blaxploitation genre dried up, and she never become a huge star – and unfortunately, Dobson struggled to find roles going forward…sadly, she died in 2006. 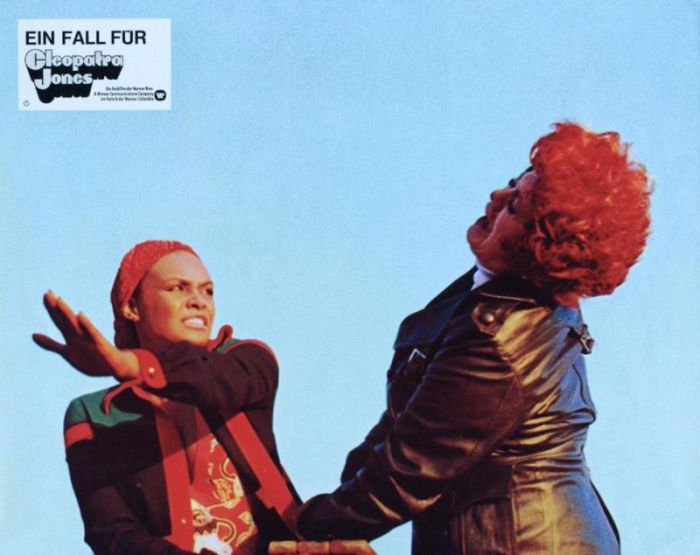 “Cleopatra Jones” is a fun, action-packed film with some crazy scenery chewing by Shelley Winters…definitely worth checking out!

If you need more crazy Shelley Winters, try out this story – she was the leader in another 70’s fil genre about crazy old ladies who killed, killed, and killed some more – click on this link to find out all about the wacky genre of “Old Lady Horror”!

Kudos to “Foxy Brown” and “Cleopatra Jones” for showing the world that women could kick ass just a hard as a man!

The genre of “blaxploitation” is fascinating – with lots of social and political themes played out in the gritty urban world of the early 70’s…and there is a great documentary that looks at this genre, see the trailer here:

Leave a comment telling me YOUR favorite blaxploitation film!