How To Clear Your Holiday Party! Celebrate Awful Celluloid! Unspool “The Godfather Of Grime!”

Home For The Holidays!

OK, I get it, you’ve celebrated the holidays – relatives visiting, with wonderful meals, gifts and conversation…day after day after day – and now you just need to be alone. But guess what?

Sure, this Jimmy Kimmel party LOOKS fun, but even these partygoers left at some point! I know there are traditions and all, but you can’t just keep entertaining…enough is enough! It won’t work if you put on a classic holiday film like this:

Who would leave before finding out if he was going to “shoot your eye out with that thing?” But what if, instead of “A Christmas Story”, you decided to screen THIS MOVIE:

How fast do you think this film would clear the room? I’ve got just what you need to send the relatives back to Fresno where they belong? What’s my secret?

Well, it all begins with “scum!” I mean, to clear a room, you’ve got to put on a really bad film. How bad? REALLY BAD! How do you define awful? Is it fair to consider a movie “bad” just because it looks like THIS?

There is a “special” kind of film that not only offends, but actively drives your guests away…and this could be the “Citizen Kane” of awful…

“They Mangle The Beautiful Into The Mutilated!”

That is just one of the great taglines on the poster for “The Ghastly Ones”…sounds like a great horror film, right? RIGHT? So, when Uncle Ed or Aunt Millie refuse to take the hint that your holiday party is over, offer to put a film on, load up your DVD with one of these films, and you are on your way!

Let’s look at “Blood Feast” – which is considered “The Godfather Of Grime”! A more shocking way to end a holiday I can’t think of! 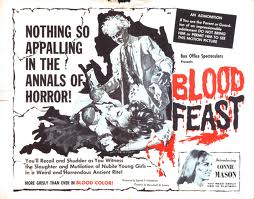 A great exploitation movie offers up a certain number of guaranteed elements: plenty of blood, gore, nudity and sexual situations – all presented as cheaply and garishly as possible!

“Nothing So Appalling In The Annals Of Horror!”

Talk about truth in advertising! This film IS appalling – in how it is made! But I’m having a bit of fun here, because this is considered “The Godfather Of Grime”! In 1964, this film SHOCKED the world with its depiction of bloody violence and sex – take a look at the classic trailer:

Yep, I call this the “Godfather Of Grime” – the first time anyone dared to film such mayhem and madness – the work of legendary Exploitation Director Herschell Gordan Lewis! Flaunting all movie codes, Lewis made “Blood Feast” for around $50,000 – and it grossed millions! Yes, it’s a lousy movie, but it really blew the doors off grindhouse theaters across the country!

The plot is simple: A crazy Egyptian caterer named “Ramses” collects body parts from young maidens in order to bring Ishtar, an ancient goddess of good and evil back to life. And he does it with VERY BIG EYES! 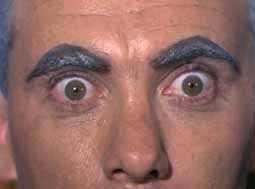 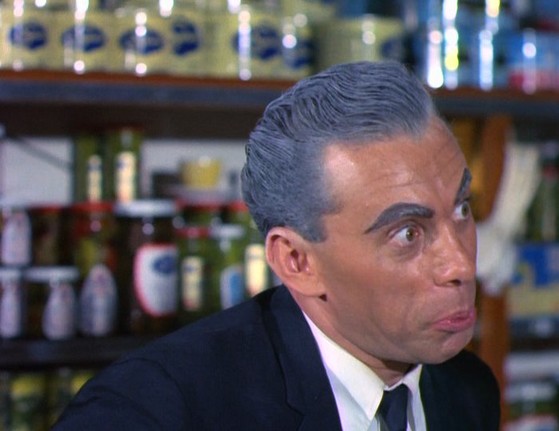 “You may need this when you see ‘Blood Feast'”!

Lewis went on to make another classic exploitation film: 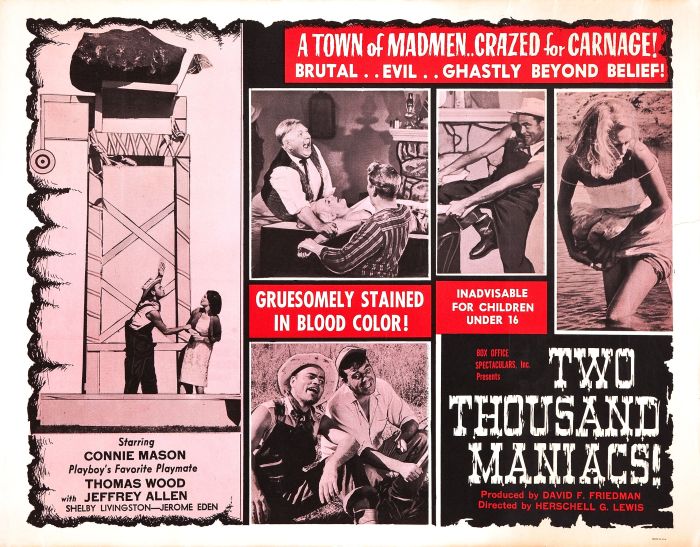 While Lewis kept piling on the blood, Producer Friedman kept to the bedroom to uncover America’s sordid sex secrets:

“DEPRAVED! DEMENTED! LOATHSOME! NAMELESS! SHAMELESS! THESE ARE THE:”

“Hell is their only address!”

Trust me when I tell you that there is A LOT of sleazy stuff on display here, all presented a a cautionary tale! Friedman was the master at it. To read more about this amazingly prolific Exploitation Producer, click on the whole story HERE:

“Everything They Touch Is Stained!”

Herschell Gordon Lewis directed “Blood Feast”, and he also loved to exploit sex…starting with early “nudie cuties” – education films that offered the only legal way to show nudity in movies, by offering an “educational” angle to the nudity…like his take on “nudist camps!”

After that success, Lewis decided to shock American instead… 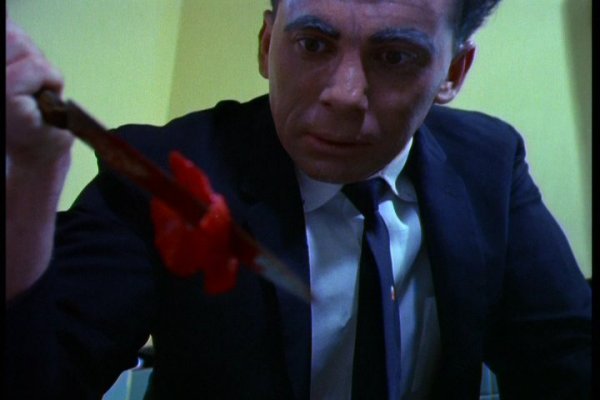 The phenomenal success of “Blood Feast” inspired the Director – he also directed the classic “2000 Maniacs” and “Color Me Blood Red!”

These are classic of the genre – and all of them are pretty awful!

It’s enough to give you a splitting headache!

How was that for a segue? Don’t worry, it all makes sense, as we now venture into the world of arguably the world’s WORST film maker! And don’t worry, it’s presented:

How can you resist a movie that offers this tagline?

Check out the “Doctor’s Warning” on the poster – a classic “come on” for the suckers at that time…love it! Now, back to why we are here: “The Ghastly Ones” is one of the world’s WORST exploitation films ever made! Check out this legendarily bad trailer!

Here is the plot: Three married couples spend the night in a Victorian-era house where they start getting killed off by a deranged psycho who’s bent on claiming an inheritance they are all entitled to.

Sure, that’s a servicable plot: but under the Direction of Andy Milligan, it’s a debacle! Here’s a great bit of trivia, thanks to IMDB: In several of the fight scenes of the film, the crew and their cameras and sound equipment are visible.

There are also moments when the director can be heard softly reminding the actors of their lines!

Now THAT”S film making! As one reader on IMDB stated:

Now, that’s what it takes to make this list – you have to lose your head!

Once again, thanks to the great film buffs at Something Weird Video, you can have “The Ghastly Ones” as part of a Milligan double bill! Congrats to the SW people for keeping this part of movie history alive!

To see ALL of Milligan’s directing madness – and trust me there is plenty of jaw-dropping badness to share, click here!

And if you want to guarantee to clear your house – and I mean fast – then this is the movie for you:

“A young bride, left alone to the lewd passions of an evil dwarf!”

Severin Films is officially going to Hell – and taking you with them – with the DVD release of what may be the sleaziest film in EuroCult history: Yes, that is Torben Bille – The Sinful Dwarf – who stars as the pint-sized pervert who imprisons drugged teenage sex slaves in the attic of his drunken mother’s decrepit rooming house…and that’s just the first ten minutes!

Just look at this description from the cover art:

“The delicious Anne Sparrow – in her first and understandably only screen role – co-stars in this towering achievement in graphic depravity, now fully restored from a 35mm print discovered hidden in a janitor’s closet at the Danish Film Institute!”

Anne Sparrow certainly had a good reason NEVER TO ACT AGAIN – in classic euro-sleaze style, she is abducted and abused by our Sinful Dwarf – while her husband naively looks for a job…

Oh, did I mention that his Mom is CRAZY – and yes, she SINGS! Happy Mother’s Day indeed! You will never clean your ears the same way again…

And yes, that’s right – this movie was not only found in a janitor’s closet in Denmark – but they chose not to throw it out!

You will never see a more bizarre film than “The Sinful Dwarf” – and yes, it’s a euro-sleazy as they come…this is grindhouse at its best – or worst!

Put in any of these classic exploitation films and watch the floodgates open and the driveway clear! And by the way, I own all of these films!