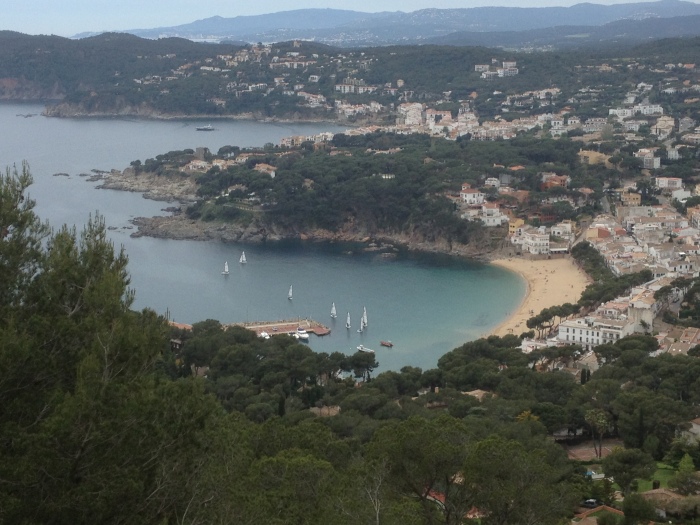 This is, without a doubt, one of the most beautiful places in the world – Spain’s “wild coast”, a one hundred+ mile coastline just east of Barcelona, on the Mediterranean Sea…

The only thing “wilder” than this coast is trying to get to it!

We actually did this episode of “Wild On…” in my E! days. I think Barbara Pepe suggested it, and she was right, this is one fun place! We decided to explore the entire region – well, as much as we could in three days!

We stayed at Mas de Torrent, a Relais & Chateux property about 90 miles outside of Barcelona.

Mas de Torrent is located in the heart of Empordà, the most authentic and chic region on the Costa Brava, with its beautiful beaches and little medieval villages, in between olive and cypress trees. 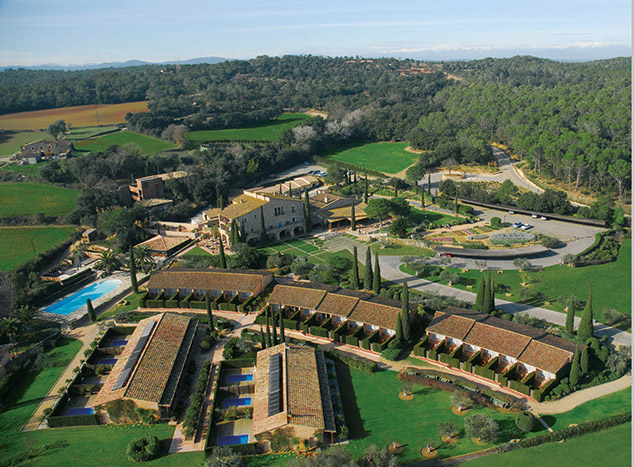 As their website proudly proclaims, “this 18th century masia delights with its spectacular views, delightful gardens and impeccable, attentive service. It’s a beautiful resort located in a perfect spot in Costa Brava!” So true, we loved staying here… 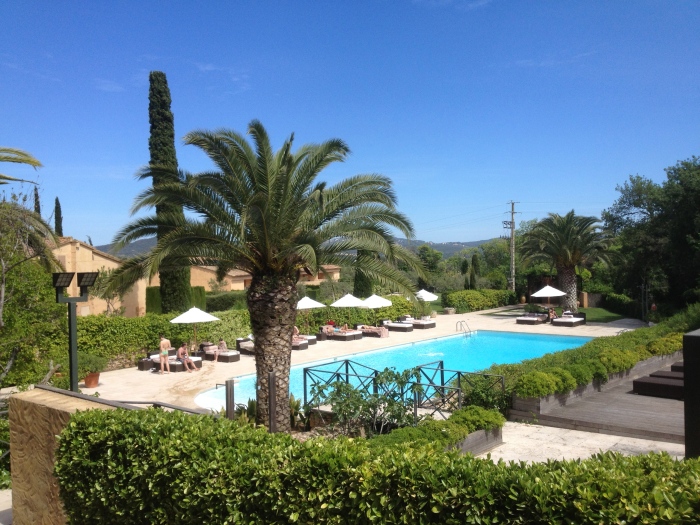 One reason we stayed at Mas de Torrent was the location: we were close to medieval villages and some of the Costa Brava’s most famous sites…and it had great cel service, too…

The farthest destination we had chosen to visit was the famous Salvador Dali museum in the town of Cadaques, Spain. That said, you could pick any single spot on the Costa Brava and get an amazing view…

Within five miles of our hotel was the medieval town of Pais. We rode our bikes there once, along an abandoned country road that was turned into a biking path… 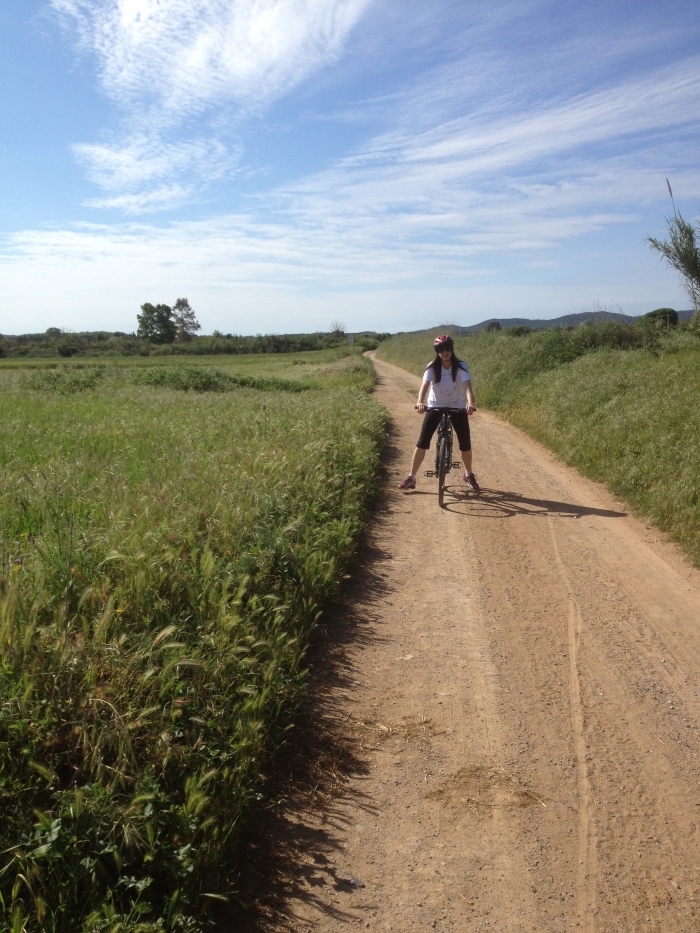 I pre-purchased tickets for the Dali museum, vital if you want to get in, as it is one of the most popular tourist destinations in the area. So, armed with tickets and directions, we headed out: 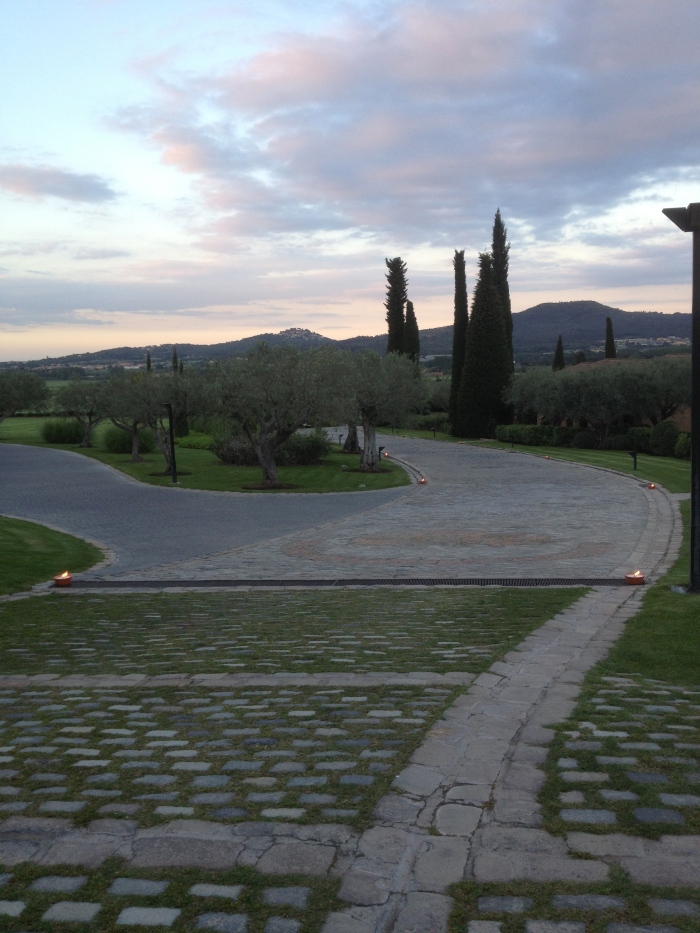 Once out on the road, you see a number of ancient towns – as well as armories up on the hillsides:

It was an overcast day, but we were looking forward to a drive through the Spanish countryside…the roads in Costa Brave are fairly small…there is one main highway, but you aren’t on it for long before you exit and head for the coast:

It’s a bit confusing once you exit the main highway: the roads literally take you directly through a number of VERY tiny towns: 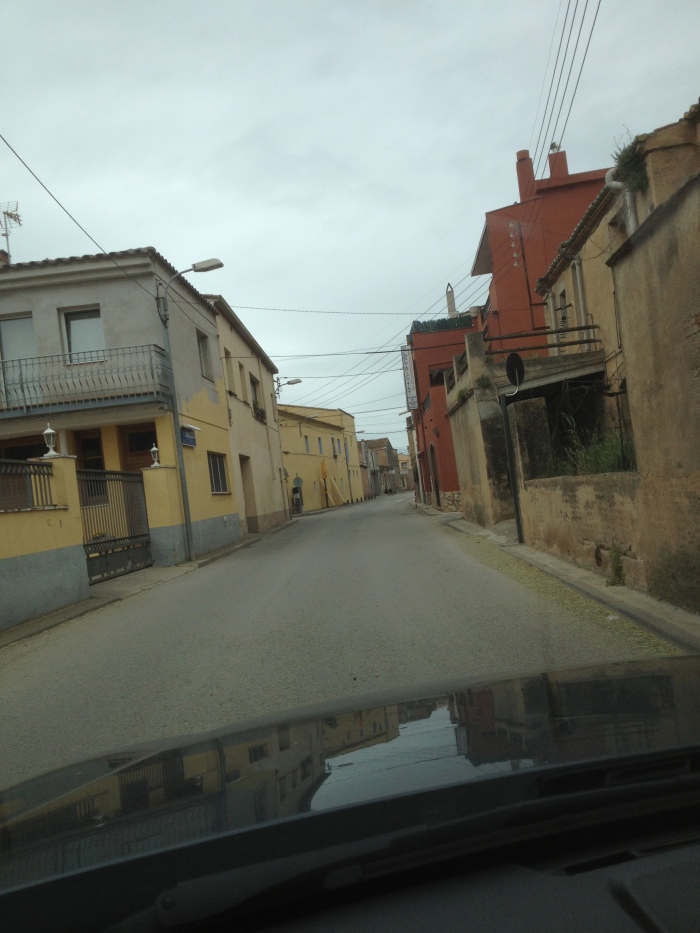 The roads were well marked – well, the roads all have identifiable numbers attached to them, but as we drove, the road just kept getting smaller and smaller, and soon we were driving through what appeared to be deserted towns! 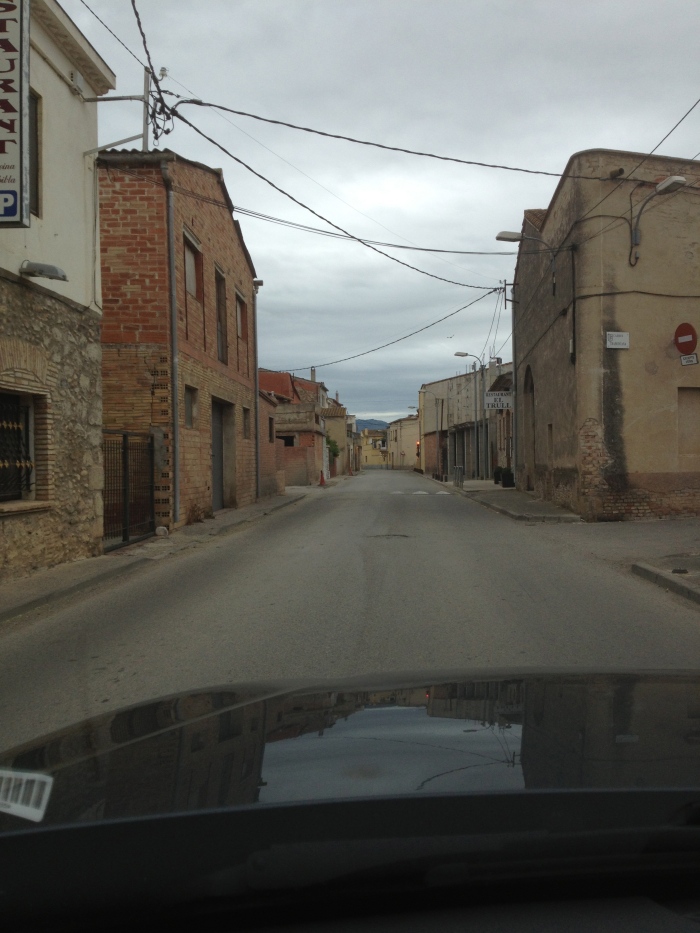 This is where I got confused – there were NO signs for Cadaques, and we were literally driving through the smallest towns I’d ever seen – was this REALLY the way to Salvador Dali?

Just as I was ready to turn around, we came upon a larger village at the base of a huge mountain…which led to a wider road – and a sign for Cadaques! After a few miles we crested the hill and saw the coastline laid out in front of us: 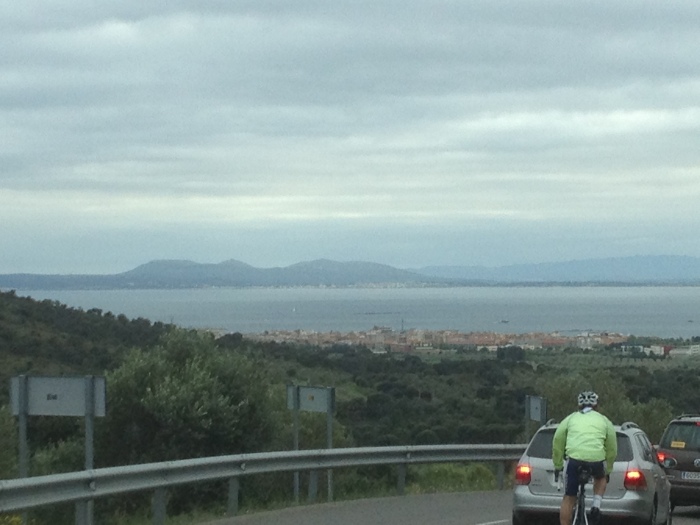 And then, just as we figured out how to get to Cadaques, the weather turned. By the time we parked in the center of what is a small town, it was cold and rainy…and the first thing we saw was THIS:

OK, so their Kebab shop was closed…it was still early in the morning. We walked through a small alleyway, and found the main part of town on the edge of the Mediterranean…very pretty, although icy cold and grey… 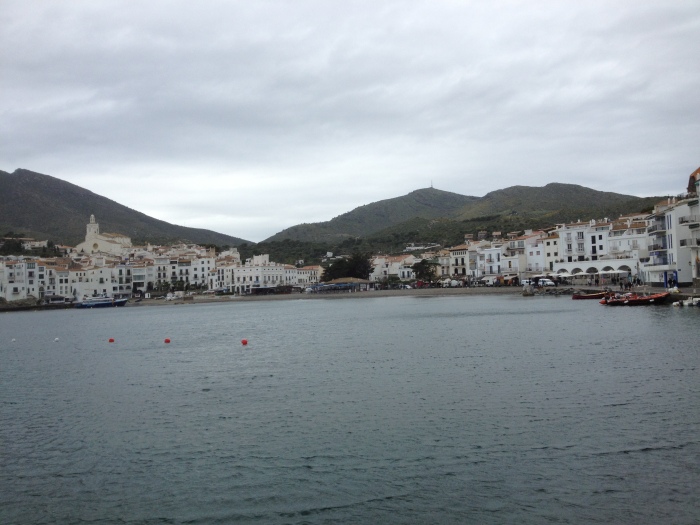 So the first question we had was: where’s the museum? The guide book I read said you can easily see an egg-shaped sculpture on the roof, but as we scanned the rooftops, no such luck…there were NO signs either… 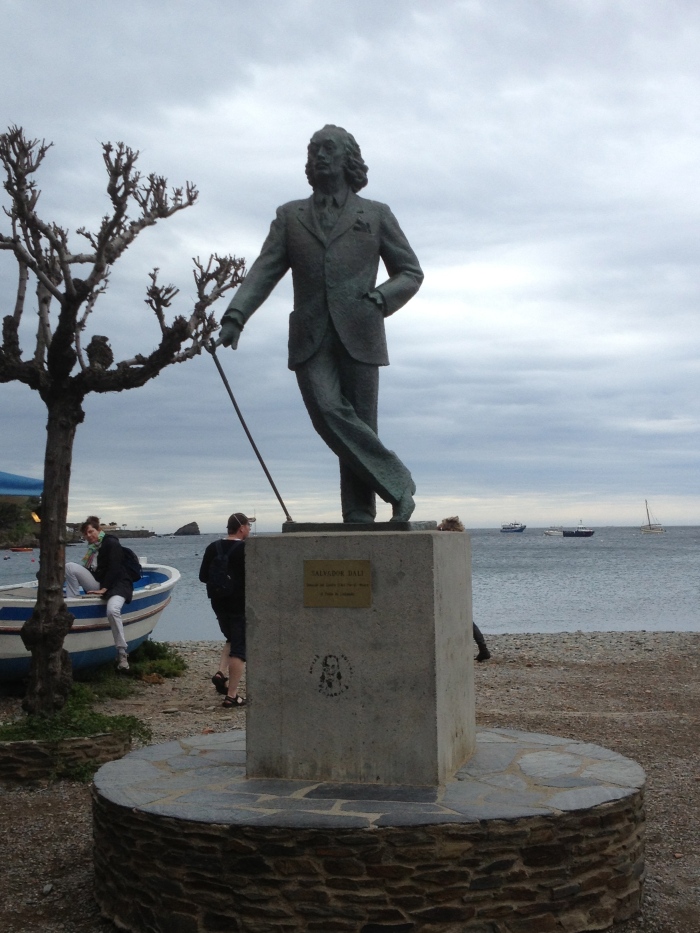 We found the Salvador Dali statue right by the water, so we assumed that was a good sign…and we saw a lot of tourists in town, so they HAD to be there for a reason, right? In fact, there were boatloads of people coming and going…

The guidebook said it was a 15-min. walk from the center of town, but we didn’t see any signs pointing us toward the museum. And of course, I left the book at the hotel. We went south along the water and saw more ferry boats landing, but no one seemed to be heading toward a museum… 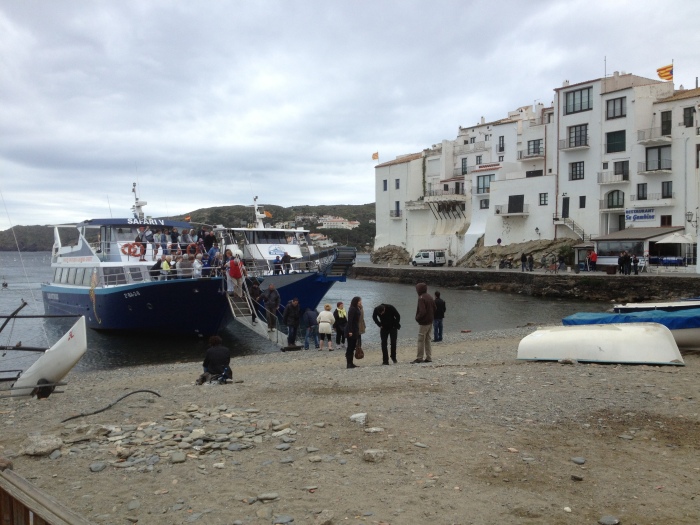 As you can see, the harbor is small, so after a few minutes we turned and headed north…the water is beautiful, but the grey clouds looked heavy with rain, so we walked a bit faster, stopping to buy a couple of sweatshirts – because it was COLD!

We saw a broad walking path along the water, and since we didn’t see a sign anywhere, this must be the route to the museum, right?

There were lots of people around, but no sign of a large egg-shaped roof – and no signs for a Salvadore Dali museum at all..and suddenly, our 11a reservation seemed at risk…the spanish clock was ticking! 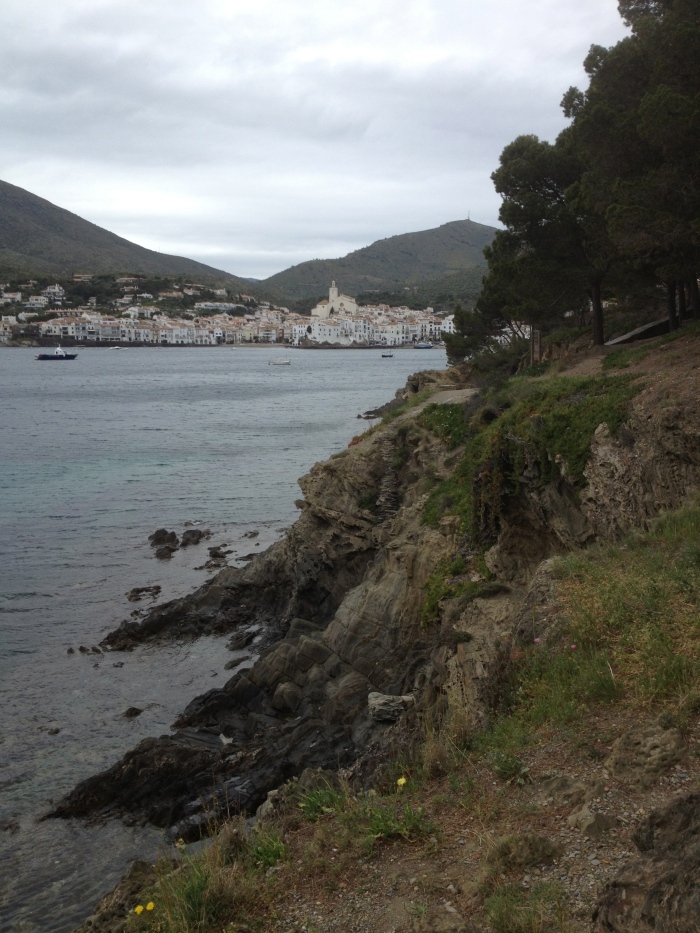 We were now well outside town, easily more than the fifteen minute walk we were anticipating, but there was nothing to suggest a museum nearby…so we turned around and hustled back to town…

Sensing out Dali dalliance was going horribly awry, I found a sign for a tourist office and we headed in…

Well, it turns out that the museum is 15 minutes BY CAR – and the only walking route is a small alleyway at the north end of town – AN UNMARKED ALLEY! 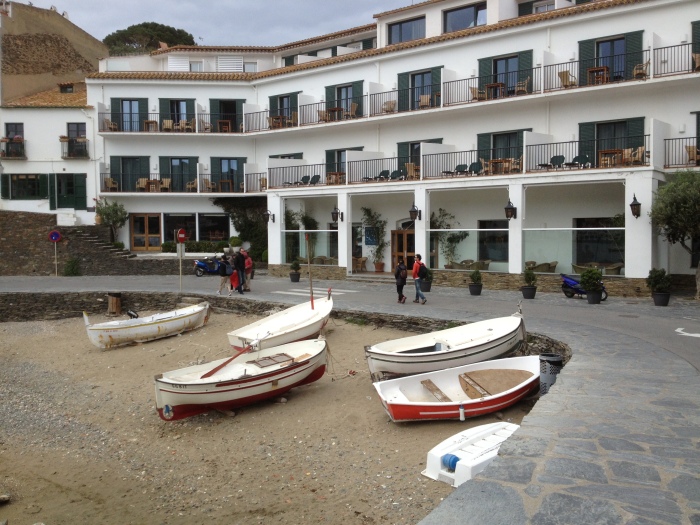 Yes, it was just to the right of this building – and there was no way we were going to make it to the museum before our reservation time, and we were told it was sold out for the next two months!

Needless to say, we weren’t amused, so we decided to grab a bite to eat, as it was now beginning to rain! 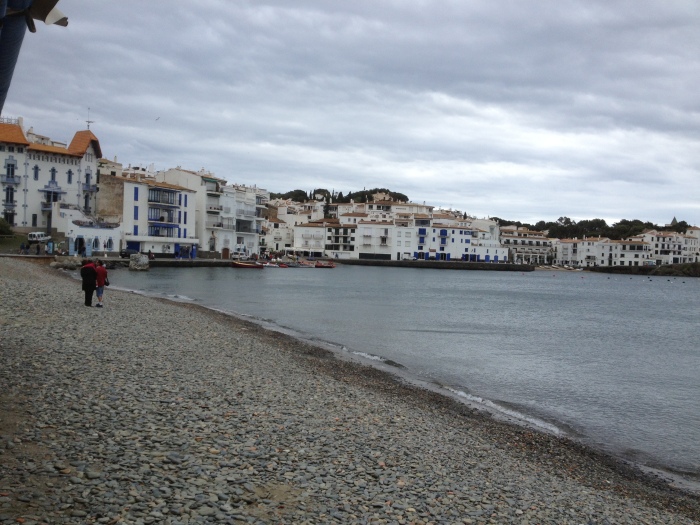 I have posted about Spain’s incredible food, and we found a small cafe on the water…as always, Alex never let things get her down, even as we sat inside and watched Cadaques rain…

We had the traditional spanish peasant bread, which is toasted and then rubbed with fresh tomato…it’s a dish everyone eats in Spain because everyone can afford it. Most restaurants serve it exactly like this, with some olive oil to drizzle on if you like:

We also ordered a plate of Iberico ham – another traditional dish in Spain – and equally delicious: 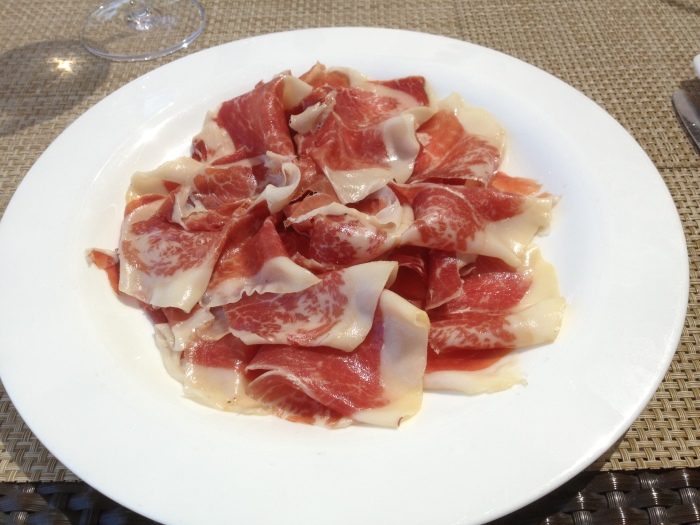 And then Alex caught me taking her picture… 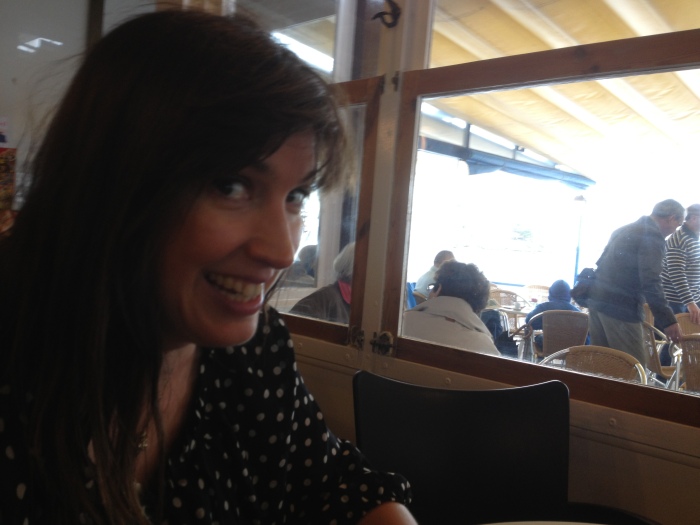 The breakfast was really good, so we waited out the rain and decided that Dali’s museum would wait for another time…

Once it stopped raining, we headed back out along the water… 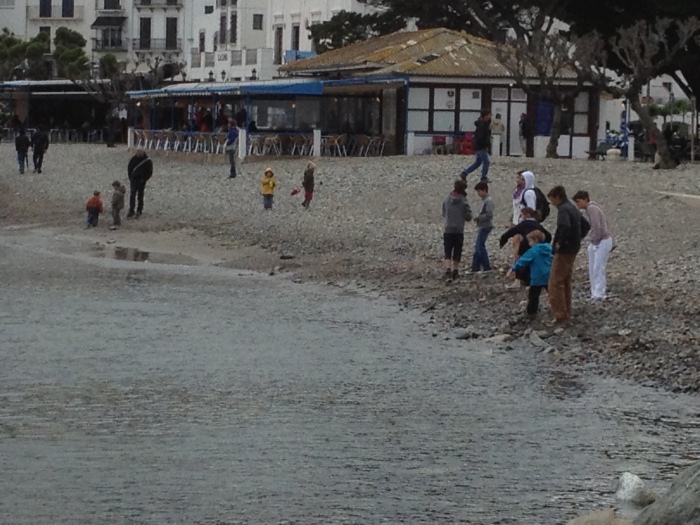 And we noticed a strange thing: dozens of kids standing along the shore, skipping rocks across the water…over and over and over….

Must be some kind of sport…and when we got back to the parking lot, I found someone parked VERYVERYVERYCLOSETOME… 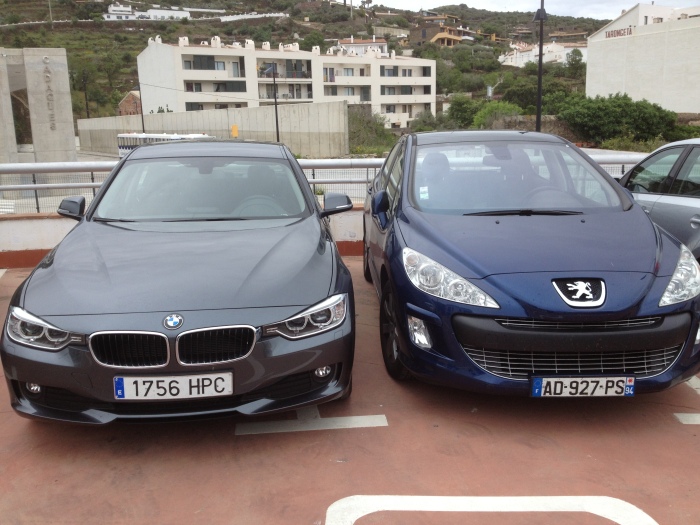 Just the way to finish the failed attempt to find Salvador Dali’s house…which, by the way, looks like THIS: 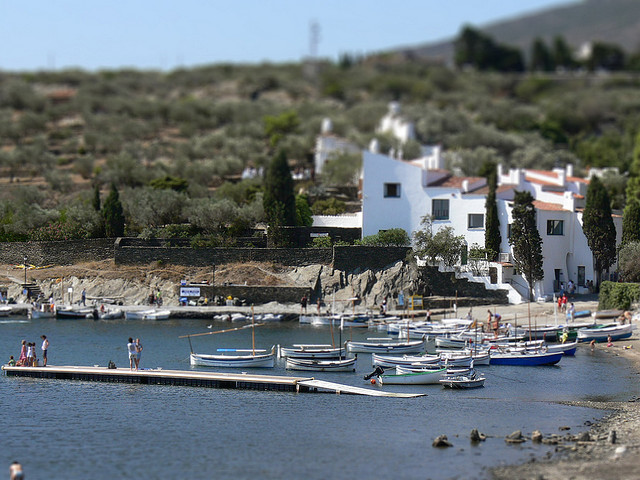 Now, if YOU want to try to conquer Cadaques, here’s more info on the museum:

Teatro Museo Salvador Dalí (Dalí Theatre Museum) in Figueres, Costa Brava is a must see. Figueres is located 30 km. on the west of town Cadaques and is the birthplace of the surrealist artist Salvador Dalí. 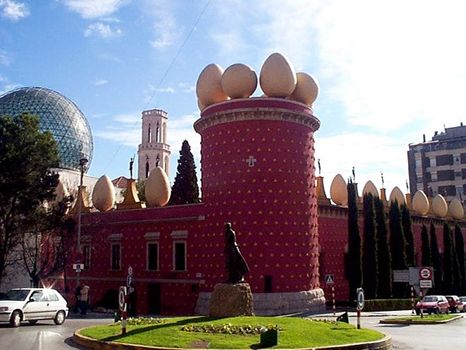 The house which has a weird architecture was built by Dalí on 1929 at the Lligat Port, on the Cadaques coast.

Constructed around a small fisherman’s hut, the house is the product of 40 years of Dali’s efforts and dedication. Port Lligat Bay, ever-present in the artist’s work, is celebrated and framed by windows of different shapes and sizes. And as one of the pictures shows, there IS a very noticable egg on the roof – just nowhere NEAR Cadaques!

And here is the Artist, hanging out once with legendary Rocker Alice Cooper. I include this just because I like Alcie Cooper, and at least HE got to hang out with Dali! 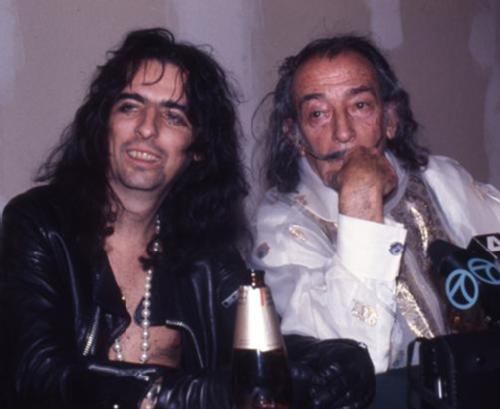 No such luck for us, but it was a great misadventure in one of our favorites places to visit EVER! Let me know what you think!