Steve Martin’s TV Years! Plus Scoundrels, Jerks and Del Griffith, Too! The Brilliance of Steve Martin!

Talk About A “Wild And Crazy” Guy!

It is easy to forget just how funny someone is after they’ve entertained you for so long…you can take them for granted…so it’s always nice to go back and remember just how brilliantly funny certain people are…like this guy:

It is the face that launched a thousand laughs…

And one of the all-time greatest faces of comedy. Steve Martin burst onto the comedy scene as the “Wild And Crazy Guy” on SNL, doing anything for a laugh…

And then a long career in film…and as time has gone on, and some of the work wasn’t to the same level, it was easy to forget just how influential he was…

Think of him as the Louis CK and Dave Chapelle of his time – with a banjo:

And of course, he became one of the greatest comedy Actors ever…let’s celebrate that with a look at a terrific new box set of his classic TV material, and three of his best movie efforts!

This brand new release is the “Citizen Kane” of Steve Martin’s TV appearances and specials!

Until now Martin’s body of work on television has been largely unavailable on DVD. That all changes here. From the stand-up act that made him a comedy rock star (of which only two complete performances were ever recorded, both included in this set) to his four joyfully twisted NBC sketch comedy specials, his Oscar-nominated short film and a jewel box of additional comic bits, The Television Stuff finally delivers one of the most unique and treasured eras in Steve Martin’s celebrated career.

Here’s what is included in this special DVD box set:

* On Location With Steve Martin (Live At The Troubadour, 1976)

* Homage To Steve (Includes The Absent Minded Waiter and Steve Live At The Universal Amphitheatre, 1979)

Spanning 1966 to 2005, a collection of television guest appearances, speeches and music videos.

What an amazing collection of material! And as great as this looks, it reminds me of some of his greatest movie work as well!

Before we delve into the brilliance of this comedy, watch the trailer:

AND NOW, THE “TRAILER” ANECDOTE!

This is great trivia, courtesy of IMDB:

An entire day was spent shooting the trailer, which does not appear in the film. The trailer shows Freddy and Lawrence walking along the boardwalk, politely moving out of the way of other people, etc, with a voice saying something like “There are numerous distinguished gentlemen in the world… refined, cultured gentlemen… nice men… but nice men finish last”. As these last few lines are spoken, Freddy pushes an old lady into the water, and Lawrence shoves a kid’s face into his cotton candy.

What a great tease for a great comedy! Let’s get into the details:

Lawrence Jamieson is a sophisticated man about town…Steve Martin is an idiot. Caine has him arrested, and Martin delivers a brilliant attempt to remember his “friend’s” name, while the Cop waits patiently outside the cell. 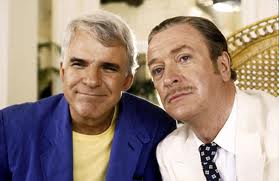 Freddy Besnon: “YES! We’re like this!” (he crosses his fingers)

According to the DVD commentary, when Freddy is in jail trying to remember Lawrence’s name, the entire scene was improvised by Steve Martin. Director Frank Oz was crouched out of camera range and tapped actor Anton Rodgers on the foot to interrupt Martin when Oz felt that he had gone as far as he could with the improv.

Michael Caine decides having his enemy closer is better, so they begin to con women out of money, with Caine the sophisticated Playboy, and Martin his idiot brother… 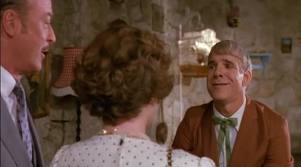 Sitting at the dinner table]
Freddy Benson: Excuse me. May I go to the bathroom first?
Lawrence Jamieson: Of course you may.
Freddy Benson: [after a pause, and with relief] Thank you.

They unsuccessfully attempt to work together only to find that this town (on the French Mediterranean coast) aint big enough for the two of them. They agree to a “loser leaves” bet. The bet brings out the best/worse in the two. 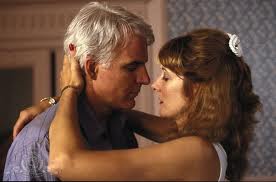 Steve Martin has never been funnier – oh wait, he’s been SO funny in so many movies it’s impossible to rank them! Let’s look at America’s first taste of movie star Steve Martin:

[first lines]
Navin R. Johnson: Huh? I am *not* a bum. I’m a jerk. I once had wealth, power, and the love of a beautiful woman. Now I only have two things: my friends, and… uh… my thermos. Huh? My story? Okay. It was never easy for me. I was born a poor black child. I remember the days, sittin’ on the porch with my family, singin’ and dancin’ down in Mississippi…

Navin is an idiot. He grew up in Mississippi as adopted son of a black family but on his 18th birthday he feels he wants to discover the rest of the world and sets out to St. Louis.

According to his book “Born Standing Up”, Steve Martin’s favorite line in the movie is ad libbed. When his character is hitchhiking, a man in a truck stops and asks, “St. Louis?” – to which Martin replies, “No, Navin Johnson.”

While Navin may be an idiot, he also has ideas, and a simple invention brings him a fortune… 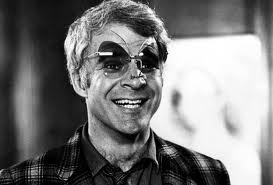 With fame and success comes a beautiful woman, Bernadette Peters…

And of course, the ultimate fall from grace, leading to Martin’s brilliant decision to leave everything behind – well, almost…

“The Jerk” was only the beginning to a great comedy career – so many I could have mentioned…but of course, it all leads to
the ultimate Steve Martin masterpiece – thanks to Del Griffith!

This is the late John Hughes’s masterpiece. And it is Steve Martin’s as well…and most importantly, it is John Candy’s greatest performance ever…the simple story of a man who just wants to get home in time to spend Thanksgiving with his family…

Steve Martin plays Neal Page – who just wants to get home for Thanksgiving. What happens first? He gets on a flight next to Del Griffith…

Del Griffith, Shower Curtain Ring Salesman and all-around blabbermouth, is never short of advice, conversation, bad jokes, or company. So the first thing Page does is try to shut him down…

Neal: Eh, look, I don’t want to be rude, but I’m not much of a conversationalist, and I really want to finish this article, a friend of mine wrote it, so…
Del: Don’t let me stand in your way, please don’t let me stand in your way. The last thing I want to be remembered as is an annoying blabbermouth… You know, nothing grinds my gears worse than some chowderhead that doesn’t know when to keep his big trap shut… If you catch me running off with my mouth, just give me a poke on the chubbs…

We get to know Del a bit better on the flight, as he pulls his socks off on the plane, waves them around and exclaims “the dogs are barking!”

And Del sums up their flight quite succinctly:

Del: “Six bucks and my right nut says we’re not landing in Chicago.”

They are diverted to Wichita…and in the airport scene in Wichita, when the airline employee announces that the flight has been canceled, you can see on the board behind him that the destination of the flight is “nowhere”. 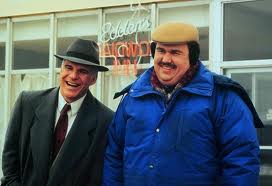 Neal: What’s the flight situation?
Del: Simple. There’s no way on earth we’re going to get out of here tonight. We’d have more luck playing pickup sticks with our butt-cheeks than we will getting a flight out of here before daybreak.
Neal: I guess we’ll find out soon enough.
Del: Yeah, but by the time the airline cancels this flight, which they will sooner or later, you’d have more of a chance to find a three-legged ballerina than you would a hotel room.
Neal: Are you saying I could be *stuck* in Wichita?
Del: I’m saying you *are* stuck in Wichita.

And the hilarious adventure is underway – sharing a room in a snowstorm, Neal uses the bathroom AFTER Del…and things get worse when they have to share a bed…

[waking up after sharing the same bed on the motel]
Neal: Del… Why did you kiss my ear?
Del: Why are you holding my hand?
Neal: [frowns] Where’s your other hand?
Del: Between two pillows…
Neal: Those aren’t pillows!
And of course, “those aren’t pillows!”

There are so many great moments, as each Actor gets to show humor, and of course, anger as well…

But, as Martin shows more disdain for Del, you start to feel sorry for him…and it’s becasue John Candy brings real empathy to the role…leading to a very emotional ending… 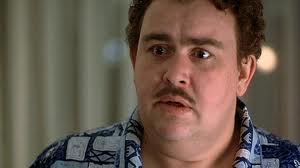 This is a great movie – funny, touching, and uplifting…a great way to celebrate John Candy, and another example of Martin’s comedy genius… 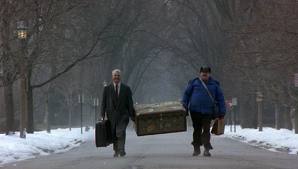