Here is a chance to watch and read great Sushi culinary efforts by two Master Chefs! 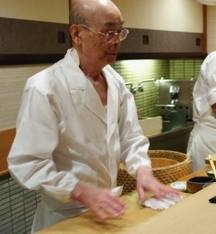 As his son Yoshikazu faces the pressures of stepping into his father’s shoes and taking over the legendary restaurant, Jiro relentlessly pursues his lifelong quest to create the perfect piece of sushi. And now, you can spend time with the master!

“Jiro Dreams of Sushi” is the story of 85-year-old Jiro Ono, considered by many to be the world’s greatest sushi chef. He is the proprietor of Sukiyabashi Jiro, a 10-seat, sushi-only restaurant inauspiciously located in a Tokyo subway station. Here is the trailer:

As you can see from the trailer, this is a beautiful meditation on food, and the quest for perfection in everything we do… 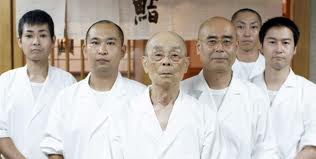 Despite its humble appearances, it is the first restaurant of its kind to be awarded a prestigious three-star Michelin Guide rating, and sushi lovers from around the globe make repeated pilgrimage, calling months in advance and shelling out top dollar for a coveted seat at Jiro’s sushi bar. 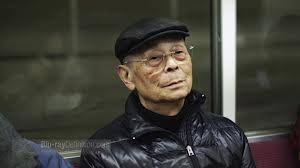 This is a fantastic documentary. You get to see what drives the world’s best sushi chef as he goes after the best fish in the world to serve…

I have been to the Tsikiji fish market in Tokyo, and it’s an amazing thing to witness: the best fish in the world being carved up for consumption around the world. And of course, Jiro gets the best of the best…

“Jiro Dreams of Sushi” is a thoughtful and elegant meditation on work, family, and the art of perfection, chronicling Jiro’s life as both an unparalleled success in the culinary world and as a loving yet complicated father.

You get a real sense of how much of an impact he has on his family, and his chefs, who aspire to measure up to his greatness…. 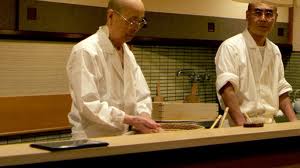 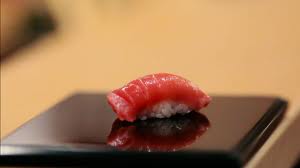 At hte end of the day, it is the pursuit of perfection – through the presentation of a flawless piece of fish…

Make sure you check out this movie!

In case you weren’t aware, Anthony Bourdain has written several novels along with his non-fiction work: terrific books like “Bone In The Throat” and “Gone Bamboo”…and now, he has a new graphic novel about sushi! 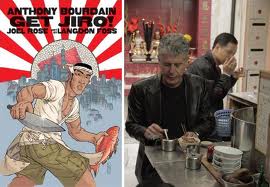 Here’s the story: In a not-too-distant future L.A. where master chefs rule the town like crime lords and people literally kill for a seat at the best restaurants, a bloody culinary war is raging.

On one side, the Internationalists, who blend foods from all over the world into exotic delights. On the other, the “Vertical Farm,” who prepare nothing but organic, vegetarian, macrobiotic dishes. Into this maelstrom steps Jiro, a renegade and ruthless sushi chef, known to decapitate patrons who dare request a California Roll, or who stir wasabi into their soy sauce.

Both sides want Jiro to join their factions. Jiro, however has bigger ideas, and in the end, no chef may be left alive!

I love that Bourdain got into the world of graphic novels – with sushi!

Here is a short interview originally posted on Amazon:

How have your travels across the world informed this story? Did you draw inspiration from anything specific?

AB: Well, I clearly love Japan–and am obsessed with hyper-fetishistic, uncompromising old school style sushi, and due to my travels, have been lucky enough to spend a lot of time there. But the book reflects a lot of my food obsessions (funky classic brasserie/bistro) and prejudices. Travel changes you. It exposes you to things. My love of street food is certainly a product of my travels.

Food culture as a whole has been a bit of a phenomenon in the media over the last few years, but not so much in comics. Was that part of your motivation for wanting to create Get Jiro?

AB: I think the explosion of interest in chefs and restaurants is certainly easy fodder for satire. But my motivation was really nothing more than to help tell a story that would be fun, extremely bloody, beautifully illustrated–and insanely detailed as to the specifics of cooking and eating. I’m a big fan of classic Japanese cinema, Hammett’s Red Harvest, spaghetti westerns and food–so these were obvious elements.

So there you have it – two ways to consume sushi!

Like Loading...
‹ Killer Sushi! The “RoboGeisha” Director IS BACK With More “Fried Shrimp” Death And Japanese Mayhem!
Bite Into The Dork! Behold The Burger Geniuses! Check Out Seattle’s Lunchbox Laboratory! ›