Home › 70's Cinema › Billie Eilish To Write New 007 Theme Song! Who Sang The Best Bond? The Worst? Name The Two That Were Rejected!

Billie Eilish To Write New 007 Theme Song! Who Sang The Best Bond? The Worst? Name The Two That Were Rejected!

Yes, the TWENTY-FIFTH James Bond 007 film, “No Time To Die” will be Daniel Craig’s 007 swan song…and speaking of songs, a huge announcement about the theme song!

Billie Eilish Has “No Time To Die!”

Yes, Billie Eilish was announced as the Singer/Songwriter for the new theme song!

As The Los Angeles Times reports:

The latest James Bond installment, “No Time to Die,” has enlisted the 18-year-old anti-pop phenom to co-write and perform the film’s title track, making Eilish the youngest artist ever to write and record a Bond theme song. The official 007 Twitter account confirmed Tuesday that Eilish penned the song with her brother and longtime collaborator Finneas O’Connell.

“It feels crazy to be a part of this in every way,” the brand tweeted, quoting the “Bad Guy” singer. “To be able to score the theme song to a film that is part of such a legendary series is a huge honour. James Bond is the coolest film franchise ever to exist. I’m still in shock.”

The terrific pop singer is an interesting choice for a theme that can be melodic and catchy, or bombastic and big…teaming her up on Craig’s swan song will be interesting to hear: 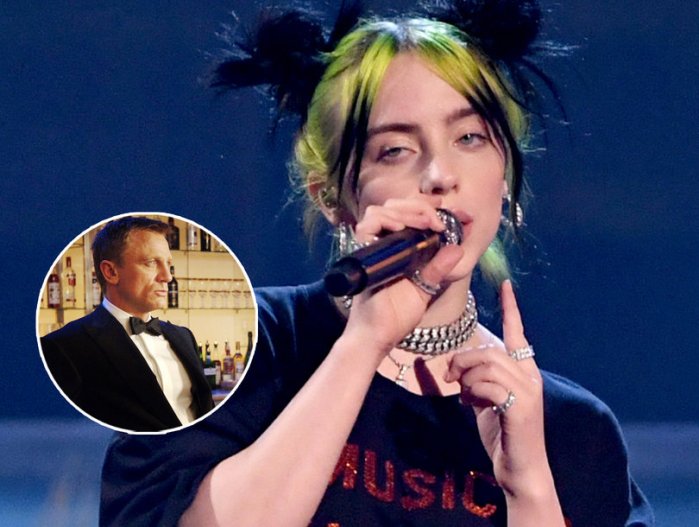 Daniel Craig’s run as Britain’s greatest Secret Agent has had incredible “Skyfall” highs and a few “Quantum” lows, but hopefully the studio will make the 25th James Bond film the best ever…after all, it’s one of the most iconic lines in movie history:

Whether you like hearing those words as uttered by the first James Bond, Sean Connery…or the latest, Daniel Craig, it signals the beginning of a great new adventure. Oh, and here are the 15 best utterances – all compiled for you!

Thanks to home video, we can watch any and all of these classic action films…every Bond at any time!

Equally as exciting as the movies themselves is THIS THEME SONG:

It’s a legendary opening theme – tight electric guitar, subtle horns that suddenly burst forth, and a just a touch of menace. From “Dr. No” on, this has been how the films have opened….well, except for the “Casino Royale” series reboot…shocking to fans – the theme was moved to the END of that movie!

You also have to love the James Bond theme songs…24 and counting – with Eilish up next!

A recent poll voted Paul McCartney’s “Live And Let Die” as the best Bond theme ever, and I won’t argue: incredibly catchy, bombastic, and pure Macca…

Is That The Best Bond Theme?

The answer is, obviously, YES! I love McCartney’s catchy, bombastic take on Bond, and here is a great clip of him performing it on his 1973 TV special!

McCartney captured the right amount of bravado AND subtlety in the song – Bond’s best – but there have been many others that were great as well, such as this classic: 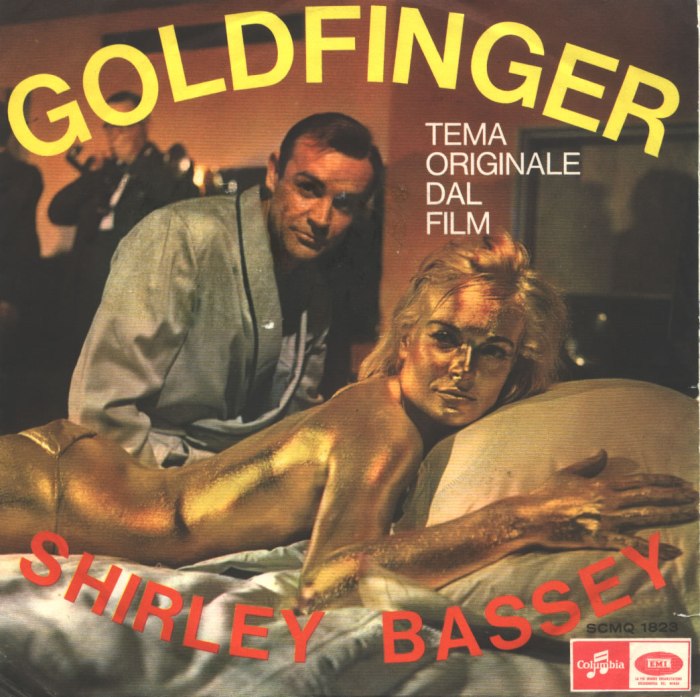 Sassy, confident, oozing with sensuality, let’s give this classic theme song a listen:

Shirley Bassey’s voice was sexy, fun, menacing and provocative – just as the films themselves became pop culture sensations – “Goldfinger” was one of the first true blockbusters, and the 007 series never looked back – and Producers began to look for an iconic theme song for every film… 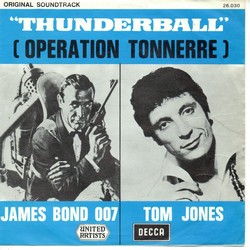 The very next film, “Thunderball” had Tom Jones, who was hugely popular at the time – then “You Only Live Twice” had Nancy Sinatra, Frank’s daughter – and Shirley Bassey returned to record this classic theme, “Diamonds Are Forever”:

Most fans felt Connery was walking through “Diamonds” a bit, but it is fair to hold that against the song? Speaking of which, one of the WORST Bond movies ever, “A View To A Kill”, had a GREAT theme song!

What makes this better is that you see lots of Duran Duran and you don’t see a lot of Bond! The series entered into a rut of trying to get the hottest pop act of the moment, which led immediately to the debacle of “a-ha”!

Ouch! What an awful theme! And there have been more as well…Sheena Easton, anyone? Chris Cornell? Sheryl Crow even delivered a bad theme…but, to me, there is one that stands above all others…

The Worst Bond Theme Ever!

Here it is, a song that has absolutely NO connection to the film, no understanding of what a 007 theme song should be at all:

Love her or hate her, Madonna delivered a theme song that IN NO WAY captures James Bond 007 – this song exists as an Artist’s effort to usurp what it means to be a Bond theme!

Using a pop star doesn’t have to spell disaster – Adele’s theme for “Skyfall” was a great return to form: big, dramatic and in the style of what a 007 theme should be – here it is:

As much as I hate “Die Another Day”, at least Madonna got to have her song heard – here are two cases where songs were ultimately rejected:

Did you know why this guy, Alice Cooper, is so sad – he he also wrote a Bond theme! But as you can see, he’s not to happy about how it turned out!

Alice Cooper was one of the biggest bands of the mid-70’s, and the group was asked to record a Bond theme song, and it was rejected! Read all about Alice Cooper’s “Man With The Golden Gun” debacle by clicking on my story here:

You see, it might be an honor to record a Bond theme song, but that doesn’t mean it gets used!

Radiohead Does 007! And Gets Whacked!

As always, it began on social media – after the release of the latest film, “SPECTRE” came this announcement from Radiohead’s lead singer:

Thom Yorke ✔@thomyorke
“Last year we were asked to write a tune for Bond movie Spectre. Yes we were”

And with that tweet, another chapter in the “censored” James Bond theme songs was written! 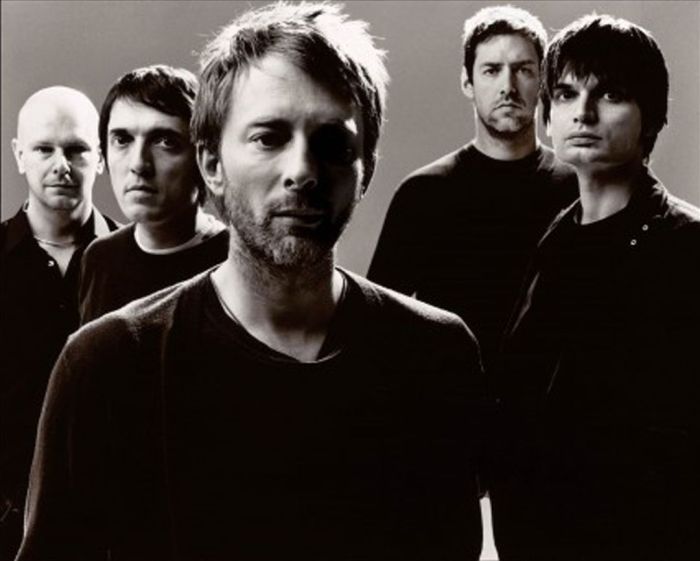 Lead singer Thom Yorke announced on Twitter that Radiohead did “write a tune” for the latest film in the James Bond series, but it didn’t end up “working out”, according to him.

Fans flooded the internet with their versions of the film’s opening titles – with the Radiohead song – take a look!

Sam Smith was ultimately chosen to record the movie’s theme song, “Writing on the Wall,” which in my opinion is an AWFUL Bond song – it’s a ballad, not a theme song!

No disrespect to Sam, he did what he was told probably, but even “On Her Majesty’s Secret Service” relegated their ballad to the middle of the film, NOT the theme song!

Yes, the love song from “OHMSS” by Louis Armstrong, “We’ve Got All The Time In The World” wasn’t used as the theme!

And remember, this will always be the best Bond theme… 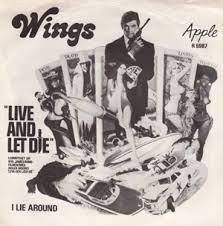 But I Need To Hear Them All!

Of course you do, but don’t worry! To help you decide the best and the worst Bond themes, here is a twelve minute compilation that includes ALL of them!

Let me know your personal best and worst Bond themes!