Home › Exotic Travel › My Search For Jim Morrison’s Grave! The Most Famous Cemetery In The World! My Pere Lachaise Paris Tour!

My Search For Jim Morrison’s Grave! The Most Famous Cemetery In The World! My Pere Lachaise Paris Tour! 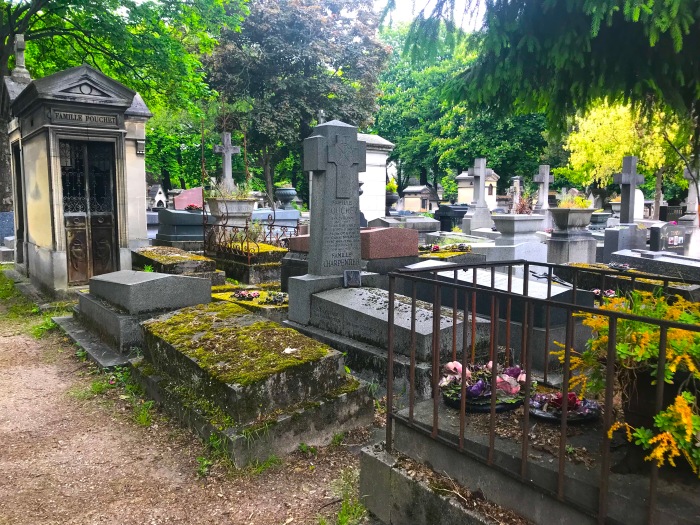 Welcome To Paris’ Most Famous Cemetery…

I’ve been to Paris at least a dozen times – yet this is the first time I’ve ever set foot in the iconic Père Lachaise Cemetery, which is the largest cemetery in Paris. With more than 3.5 million visitors annually, it is also the most visited necropolis in the world. 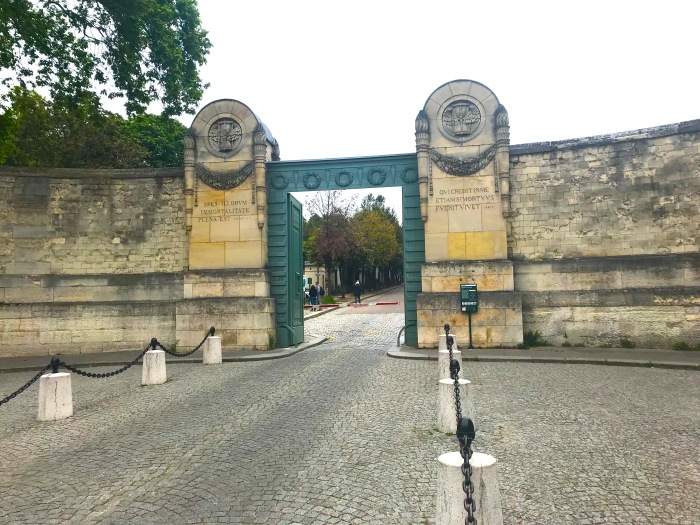 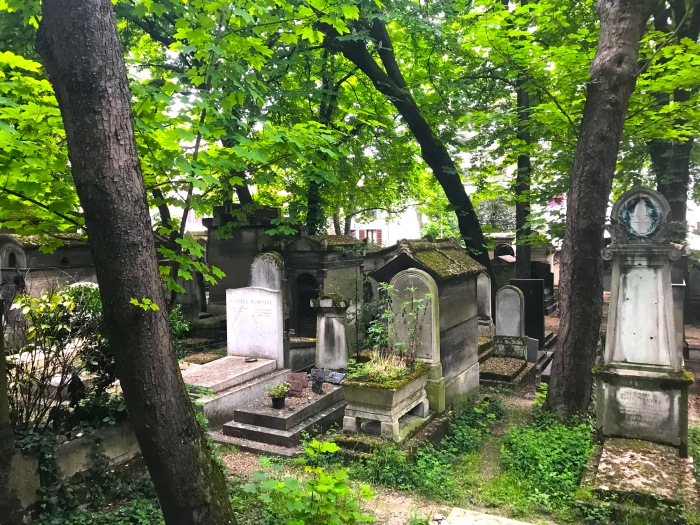 I was surprised with how packed it was, yet how well laid out as well – and any smart person would buy a map to find all of the famous graves there….of course, I didn’t… 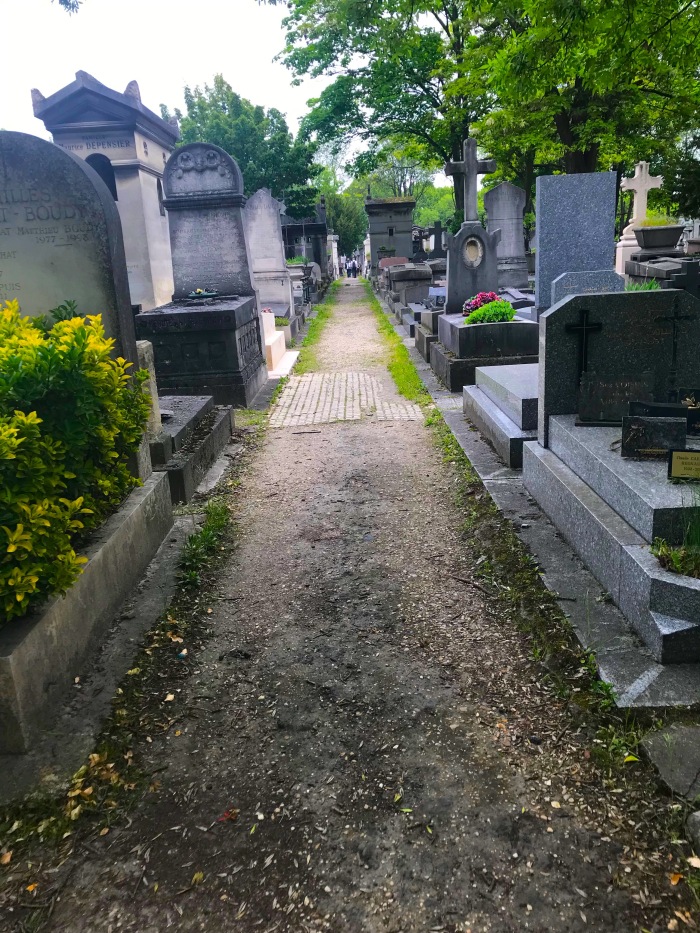 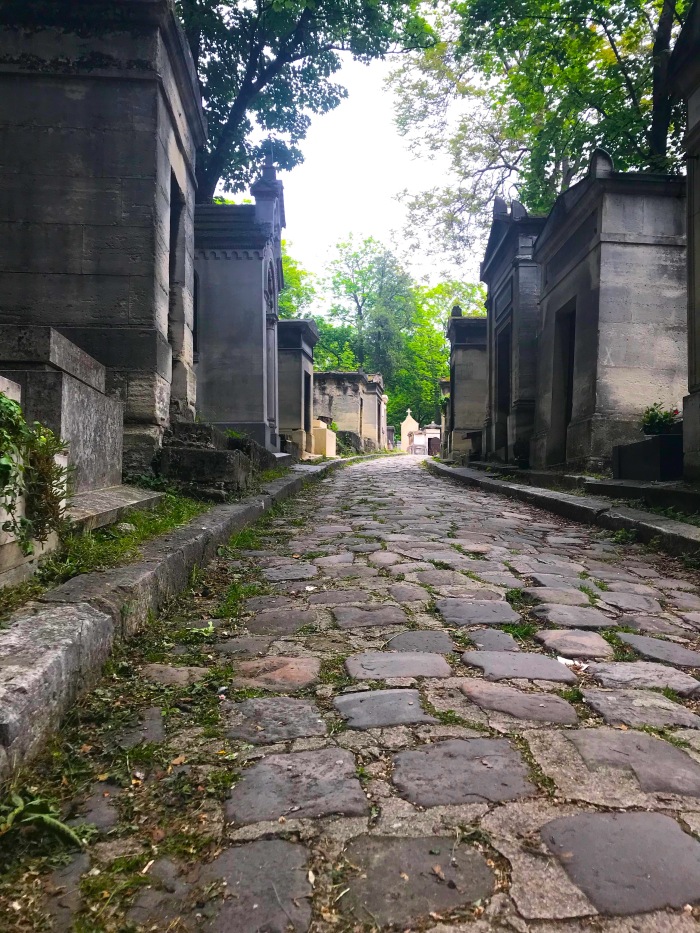 Still, the Cemetery is beautifully laid out, with nice cobblestone roads and well-maintained paths along the grave sites: 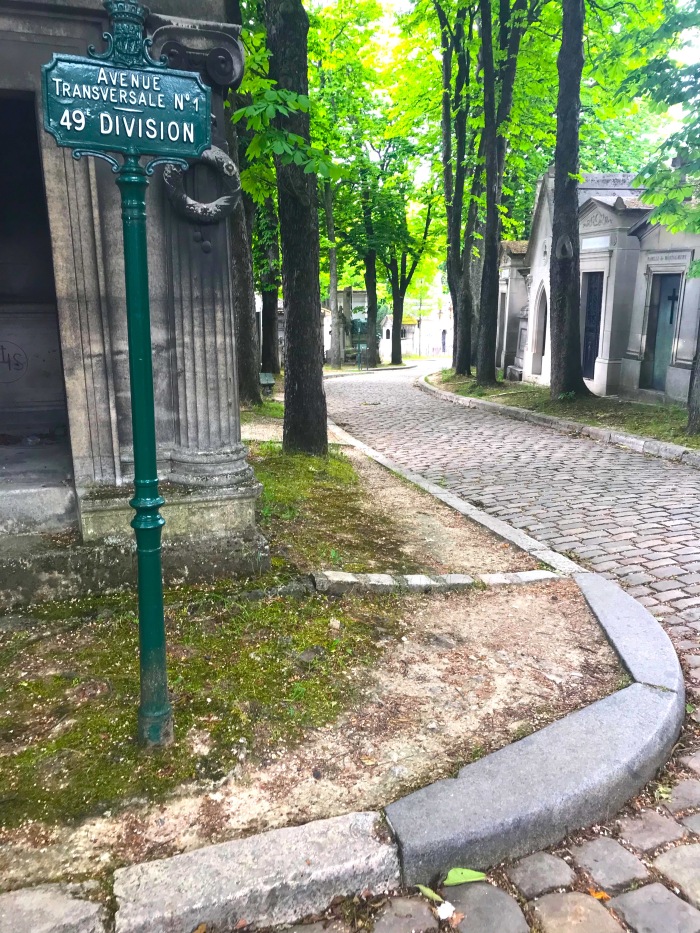 Here’s a bit of history before we go exploring:

The cemetery of Père Lachaise opened in 1804, and takes its name from the confessor to Louis XIV, Père François de la Chaise (1624–1709), who lived in the Jesuit house rebuilt during 1682 on the site of the chapel. 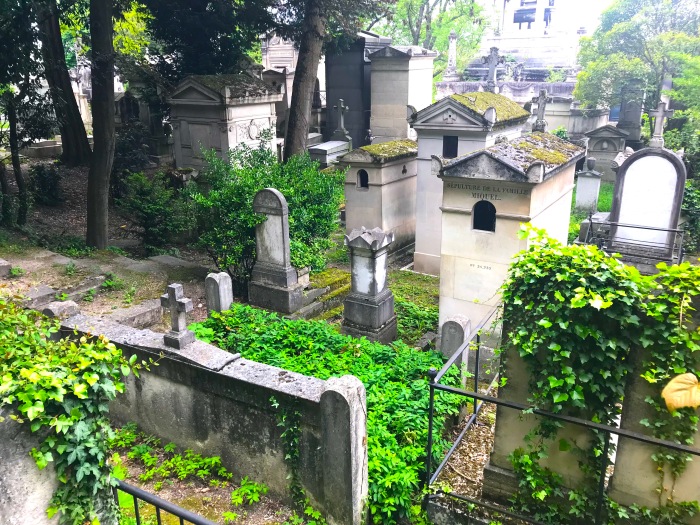 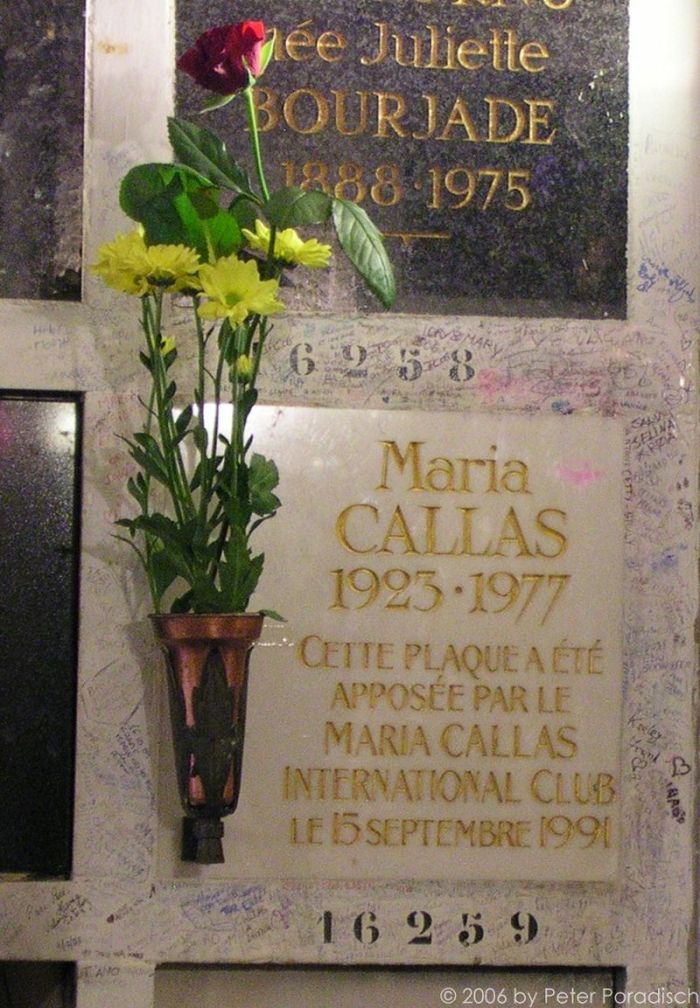 Singer Marias Callas is buried here, as is the iconic French Author Colette as well as Polish Composer/Pianist Chopin: 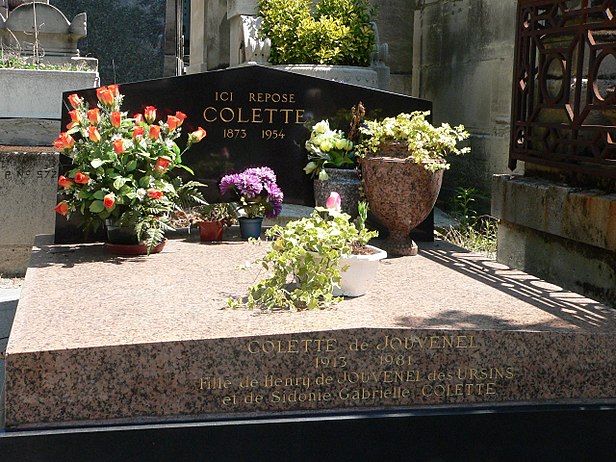 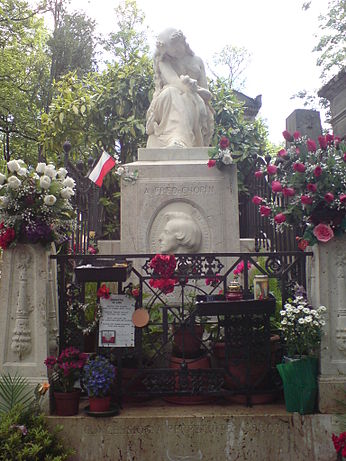 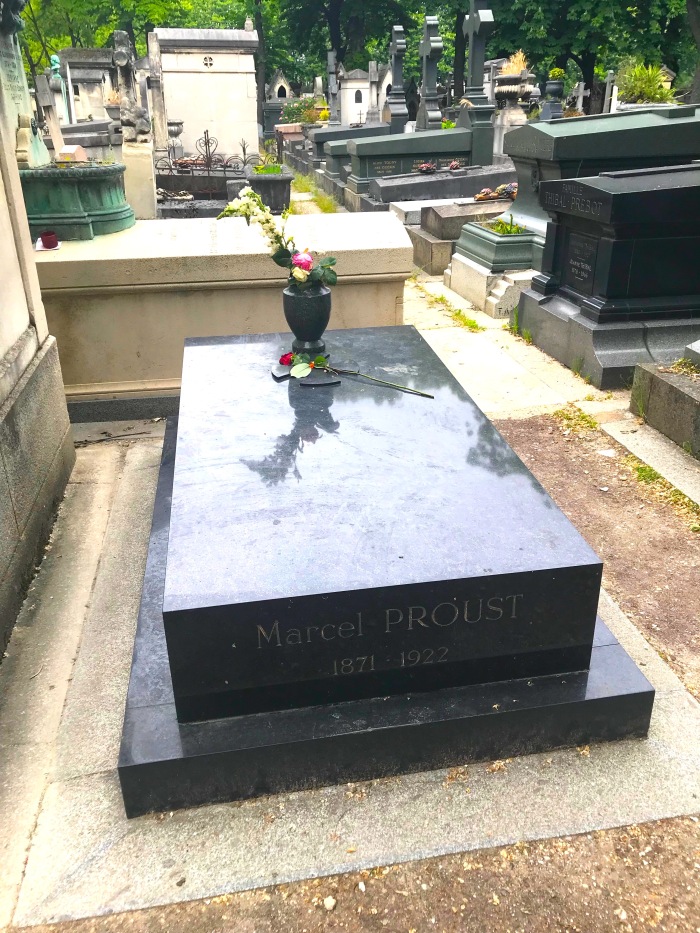 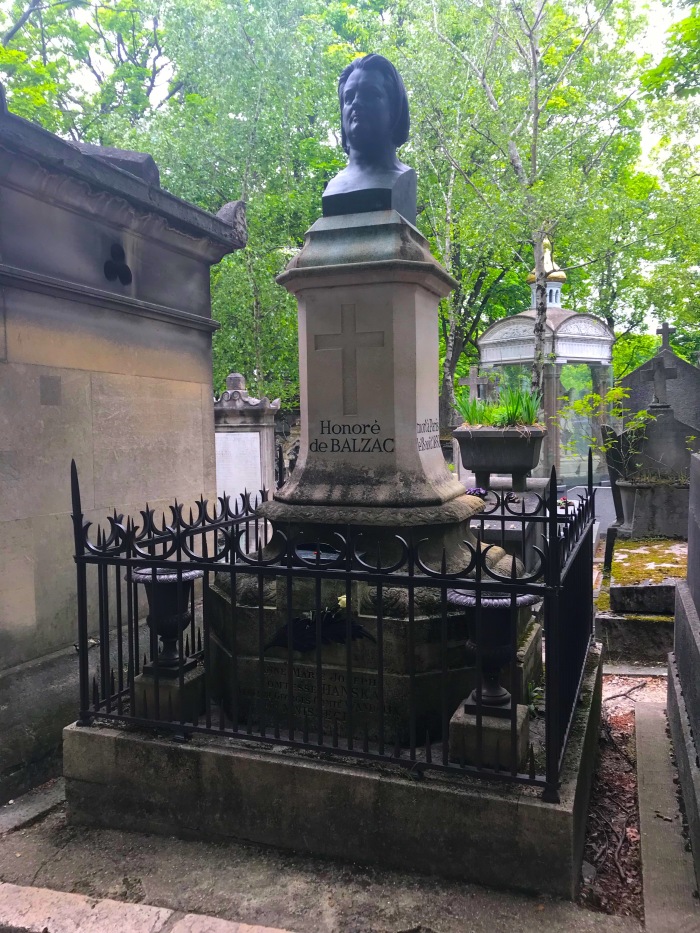 I also shot a short video of the cemetary as I walked among the tombstones and shrines, with one specific grave site in mind: 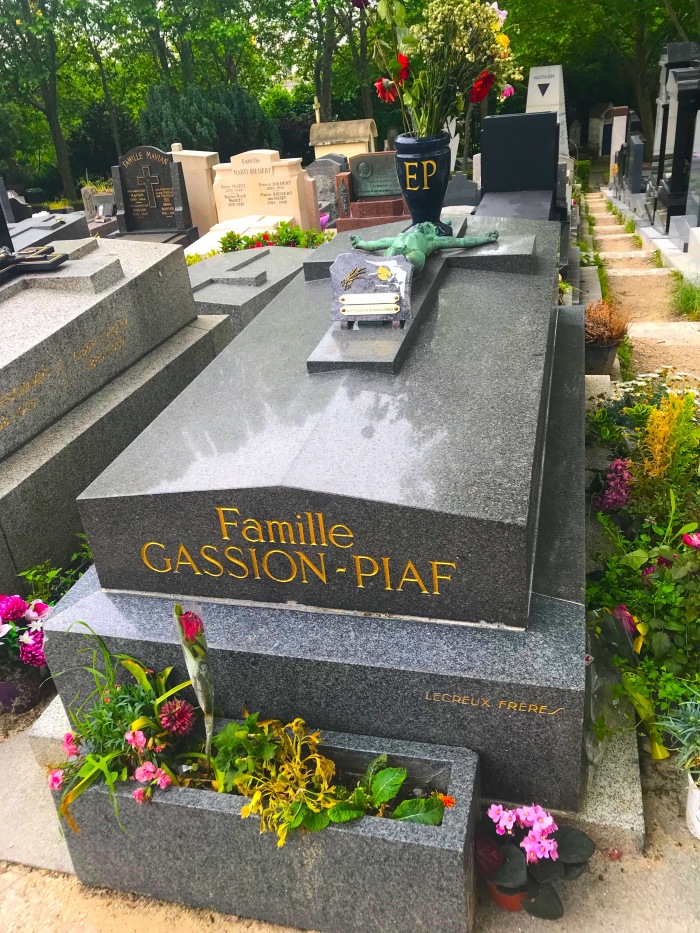 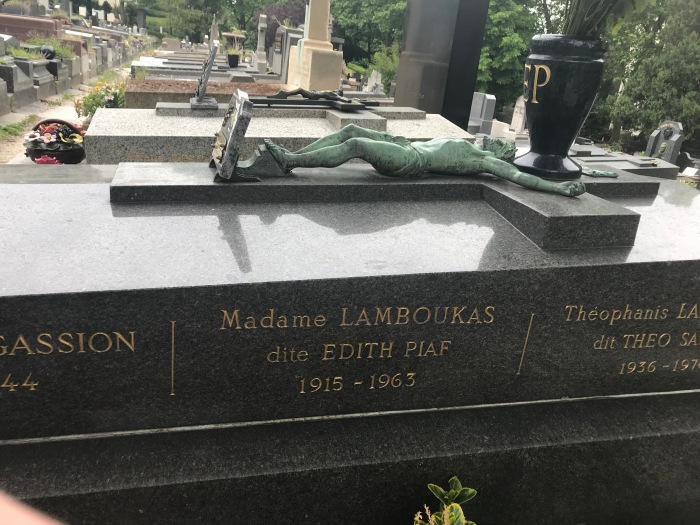 Edith Piaf was a French national treasure, and I wanted to pay my respects before heading for perhaps the most famous gravesite here – that of The Doors Lead Singer and Songwriter, Jim Morrison…here is what it’s like to approach it… 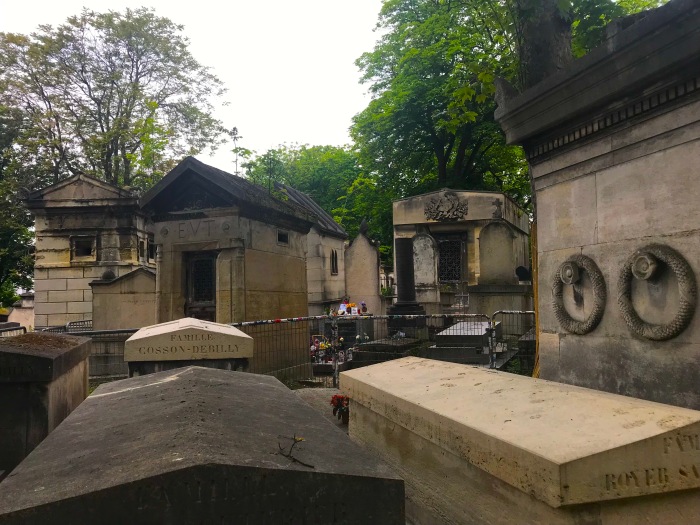 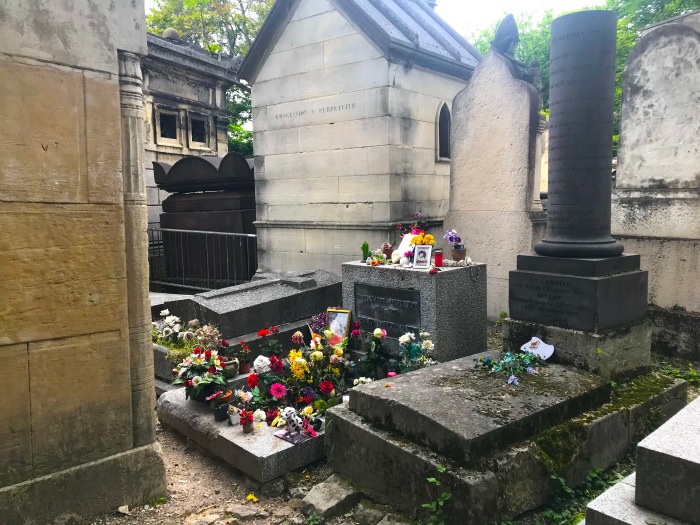 As you saw from my video, the location is very nondescript – no special signs of any kind, and the site itself is modest, with the exception of the material left by fans: 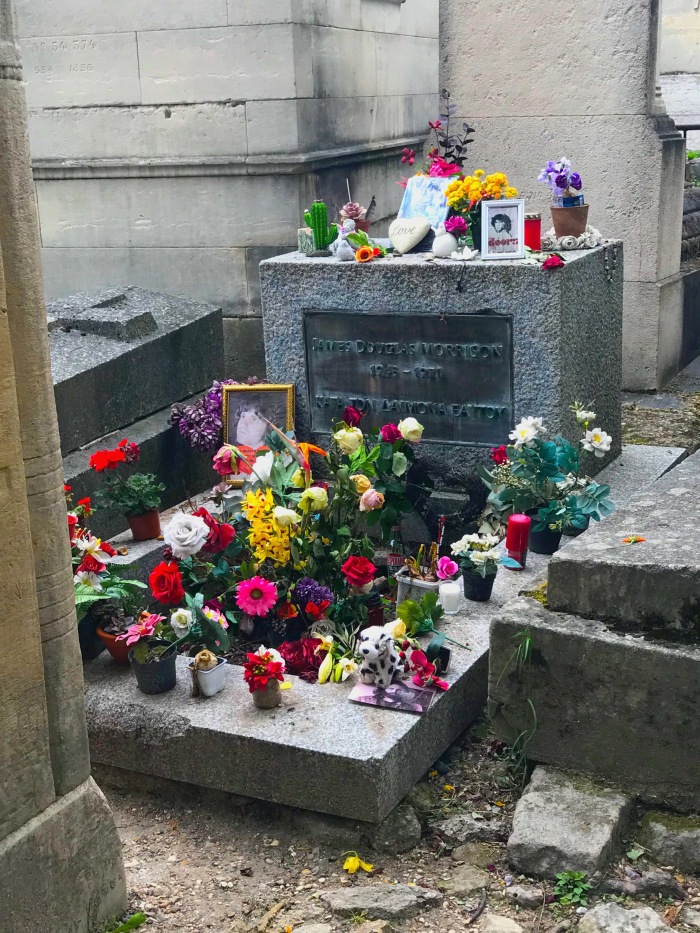 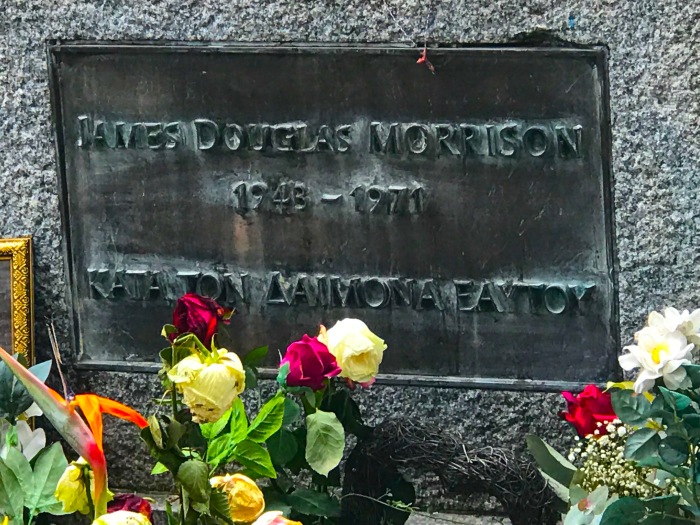 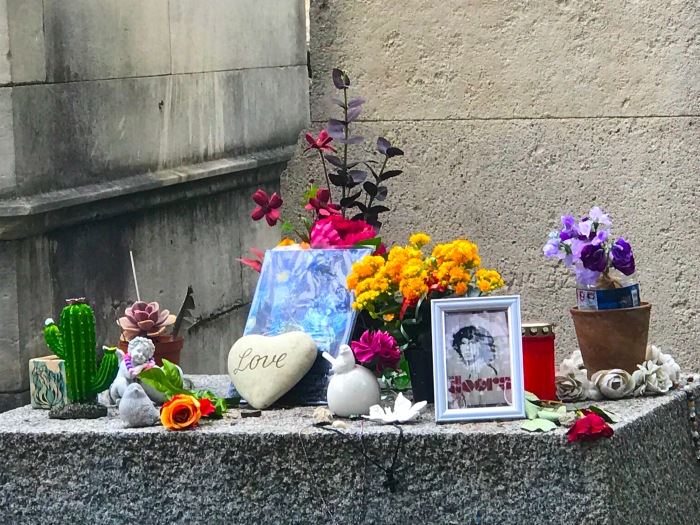 People were quiet and respectful here – just as they were in all parts of the cemetery.

Père Lachaise is still an operating cemetery and accepting new burials – as you can see, Composer Michel Legrand was just buried here this year: 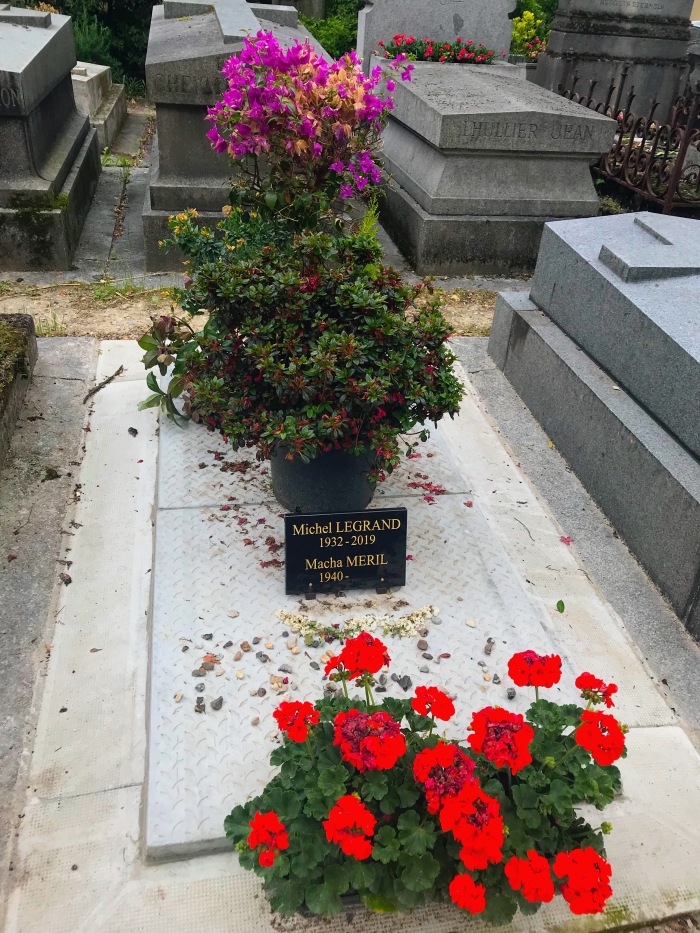 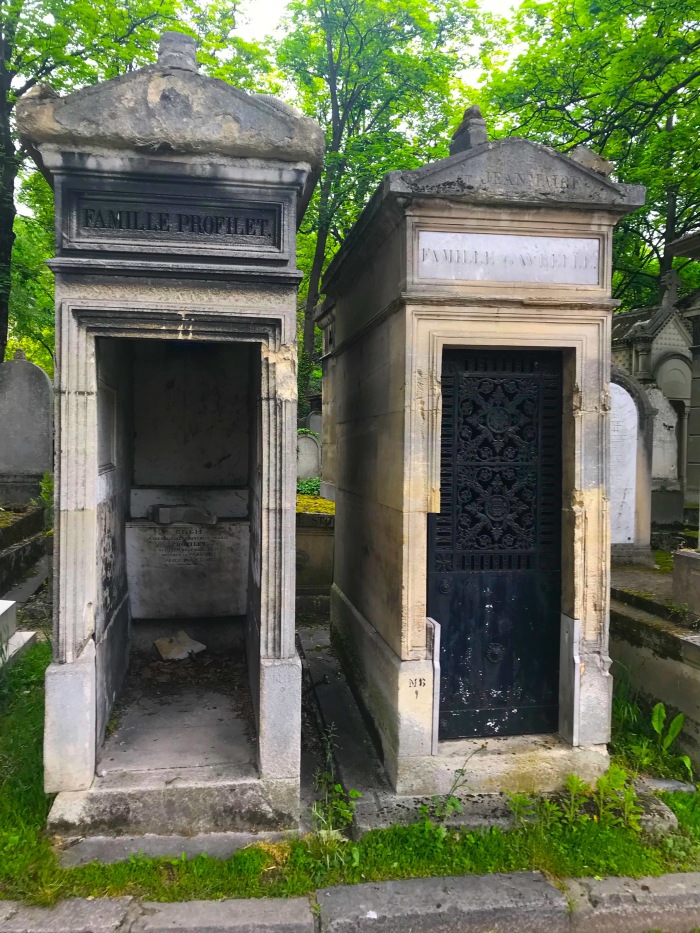 The grave sites at Père Lachaise range from simple headstones to oversized monuments. Wikipedia notes that many of the tombs are the size and shape of a telephone booth, with just enough space for a mourner to step inside, kneel to say a prayer, and leave some flowers. 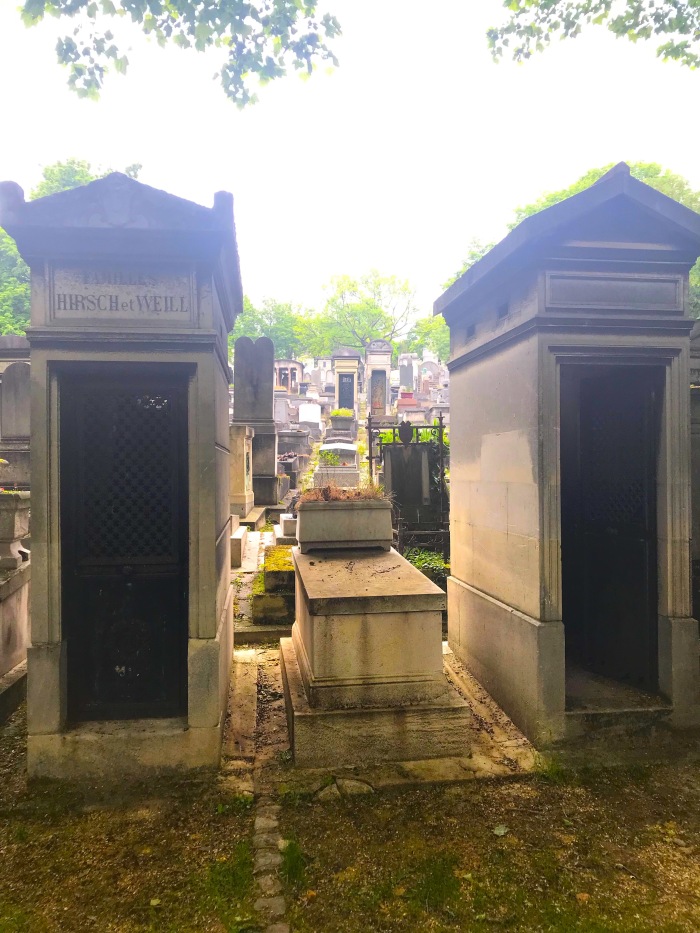 The cemetery combines the remains of multiple family members in the same grave site. At Père Lachaise, they often reopen a grave after a body has decomposed and inter another coffin – of course, when it’s the same family. 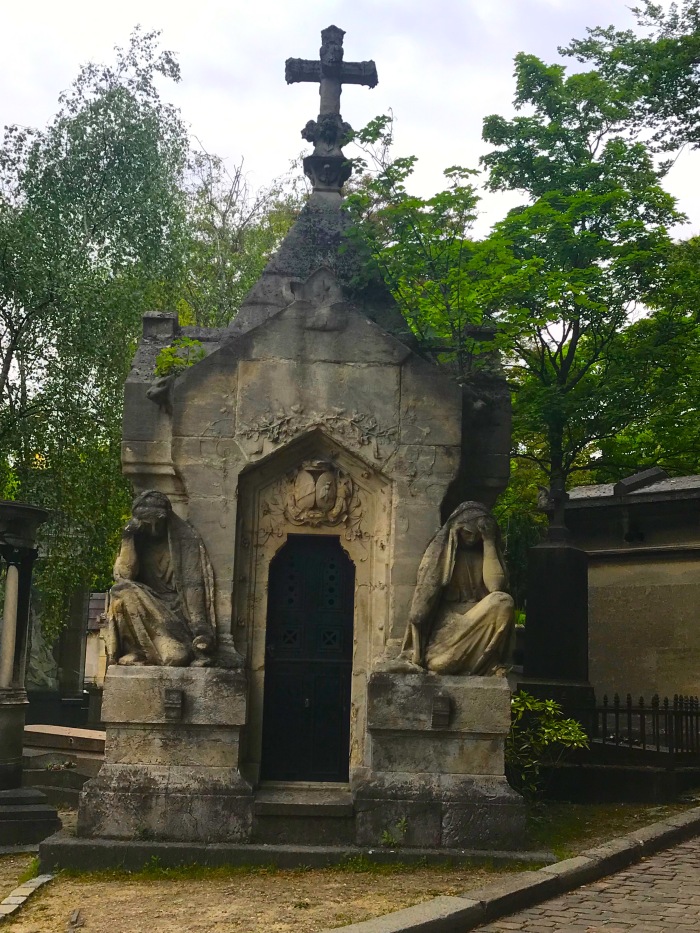 According to wikipedia, one million people have been buried at the cemetery. Along with the stored remains in the Aux Morts ossuary aded in, the number of human remains exceeds 2–3 million! 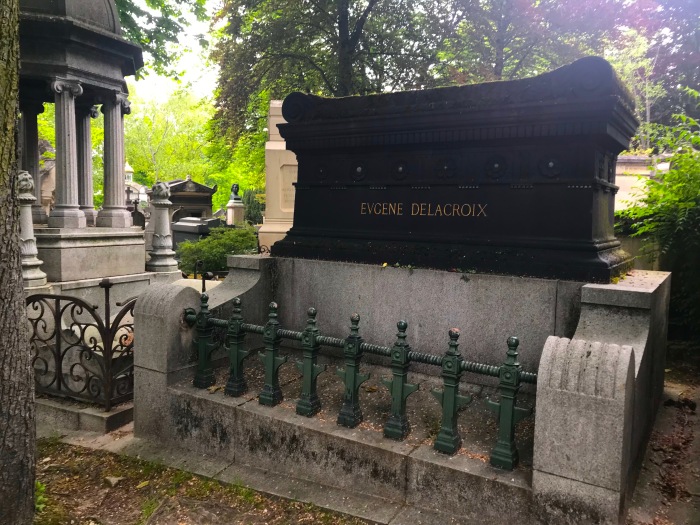 I had a fascinating visit to this incredible cemetery – and I recently shared another great Paris site I had never visited before: 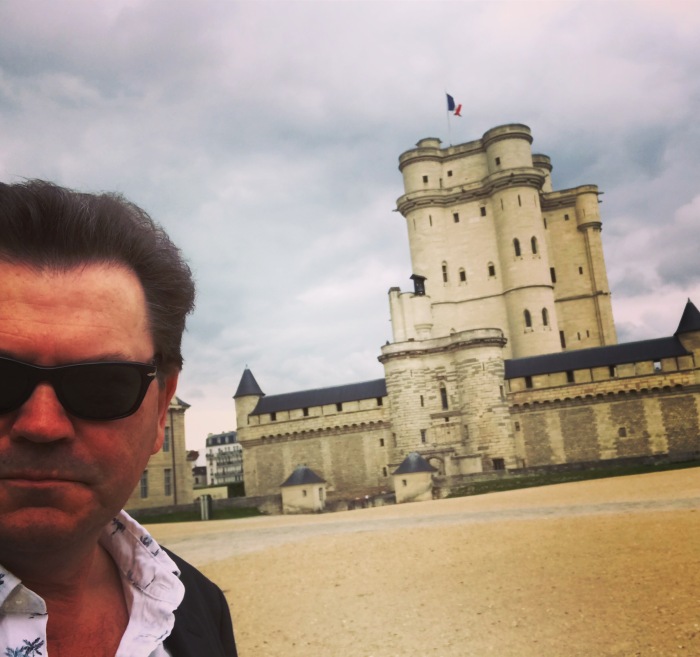 Vincennes Castle was awe-inspiring – if you want to see more pictures and some videos as well, click here:

Like Loading...
‹ “Bad Moms” Has An Al Pacino “Cruising” Connection! “Cult Movie Monday” Has The Story Of Real-Life Bad Moms!
RIP To Eve Babitz, Hollywood’s Iconic “IT” Girl…Here’s A Tribute With Her Books And A Biography Too… ›