Alison Martino reminded me of this iconic photo – Raquel Welch draped in the American flag – one of the most iconic pictures of all – from an Actress who has had an amazing career that should be appreciated more!

Today is Raquel’s 77th birthday – she is a national treasure for all the reasons I am about to share!

Enter the world of sex symbols…a world of movie trailers that boldly proclaim:

“Introducing Raquel Welch, the amazing star discovery of this, or any year!”

What a way to make your film debut – wearing THIS!

Yep, let’s go back to an era when one of the world’s most beautiful women became the world’s biggest star – all based on a very revealing movie outfit!

Raquel Welch burst onto the movie scene in the mid-60’s with a popular movie that resulted in the most iconic pin-up poster of the 60’s…first, where is all began: she was born Jo Raquel Tejada on September 5, 1940 in Chicago, Illinois, the first of three children born to Bolivian Armando Carlos Tejada Urquizo, an aerospace engineer, and his Irish-American wife Josephine Sarah Hall.

This image, of Raquel in the animal skin bikini, was the best-selling pin-up poster of the 60’s, and turned her into an international sex kitten – a picture that was taken originally from the set of her first movie, the smash hit “One Million Years B.C.” 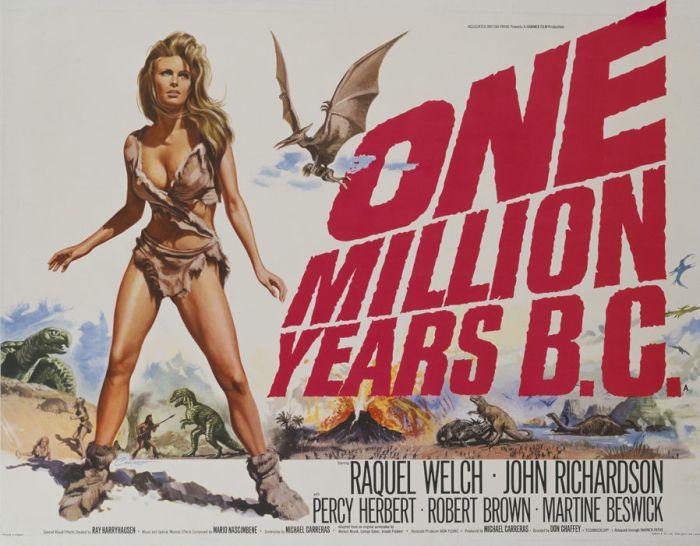 The movie was the perfect vehicle for Welch – a story of life in prehistoric times, when there was little dialogue and fewer clothes…

Narrator: This is a story of long, long ago; when the world was just beginning.

I LOVE when the trailer proclaims, “Introducing Raquel Welch, the amazing star discovery of this, or any year!” Check it out:

And it included such memorable dialogue between Raquel and her co-star: 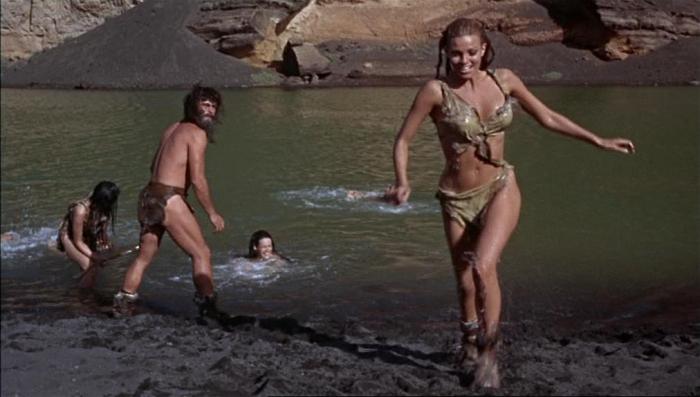 Yes, this is dialogue from the movie. But it didn’t matter, as it catapulted Raquel to stardom, and she followed up with a wide variety of roles that showcased her beauty more than her acting ability…

And of course, sexy photo shoots like this kept her popular with the guys, so naturally she teamed up with one of the biggest male action stars of the 70’s…

This is an action comedy from 1972. Police in Boston search for a mad bomber trying to extort money from the city. The cops in charge of finding this “mad bomber” are Burt Reynold, Raquel Welch and Tom Skerritt.

According to IMDB, Raquel Welch did not like Burt Reynolds because of unsavory comments he made while they were filming “100 Rifles” together. So, in this movie Welch insisted that she not have any direct scenes with Reynolds. The closest they get is during the interrogation. Even when in the same room they never have direct eye contact!

Raquel also starred in the 1971 western “Hannie Caulder”, and as you can see, there wasn’t much of a wardrobe budget for the film!

“The Last Of Sheila!”

One of her best films is this classic murder mystery from 1974…if you haven’t seen this film, it is amazing! See the trailer and more about the film here:

One of Raquel’s biggest hits was also one of the most blatant:

Yes, you read the name of the movie correctly. In case you were wondering, Raquel is NOT the fast one in this movie…but she did star with Bill Cosby and Harvey Keitel..this goofy comedy had a very simple plotline: A new law says that the first ambulance that arrives at an accident obtains the contract to transport the injured person. The result is ruthless competition between several companies. Raquel showed up to look pretty and live up to the title… 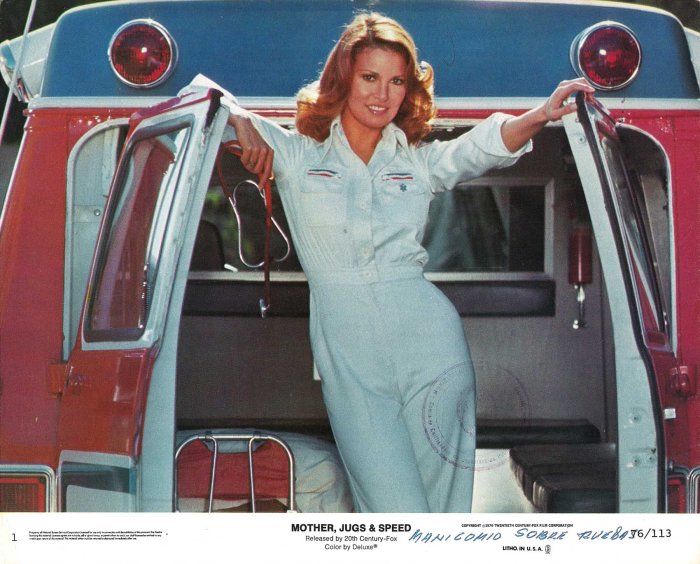 Raquel was an under-rated comedic Actress: I loved her cameo on “Seinfeld” when she gets into a “c-c-c-catfight” with Elaine!

Here is a more in-depth at her career, and her “Seinfeld” appearance!

Recently, I ran into Raquel Welch at a restaurant in West Hollywood, and here is my failed attempt to sneak a shot of her…yes, that is her in the light creme colored outfit:

Epic fail! Happy birthday and bravo to Raquel for still looking gorgeous and giving us so many great movies to enjoy!