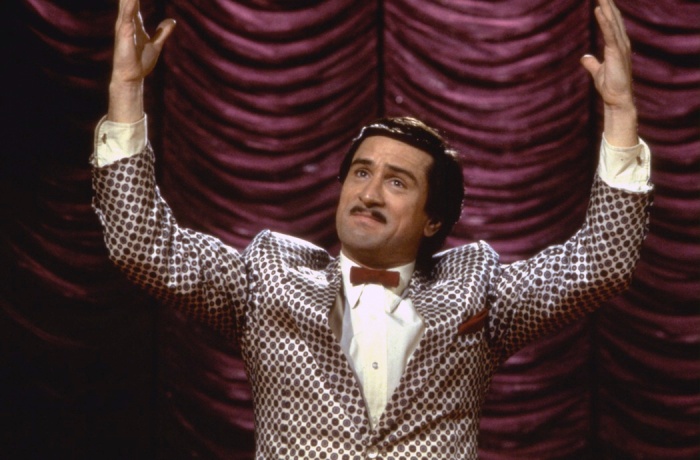 “Good evening, ladies and gentlemen. Let me introduce myself. My name is Rupert Pupkin. I was born in Clifton, New Jersey… which was not at that time a federal offense.”

Hello, Rupert! You Look Great For Your Age!

If you don’t know that image, you have missed one of the greatest films ever made – a searing look at the pursuit of fame and the price that celebrities pay for stardom.

And now, for the 30th anniversary of this classic film, a new blu-ray gives you more Scorsese, more Pupkin, and much much more! 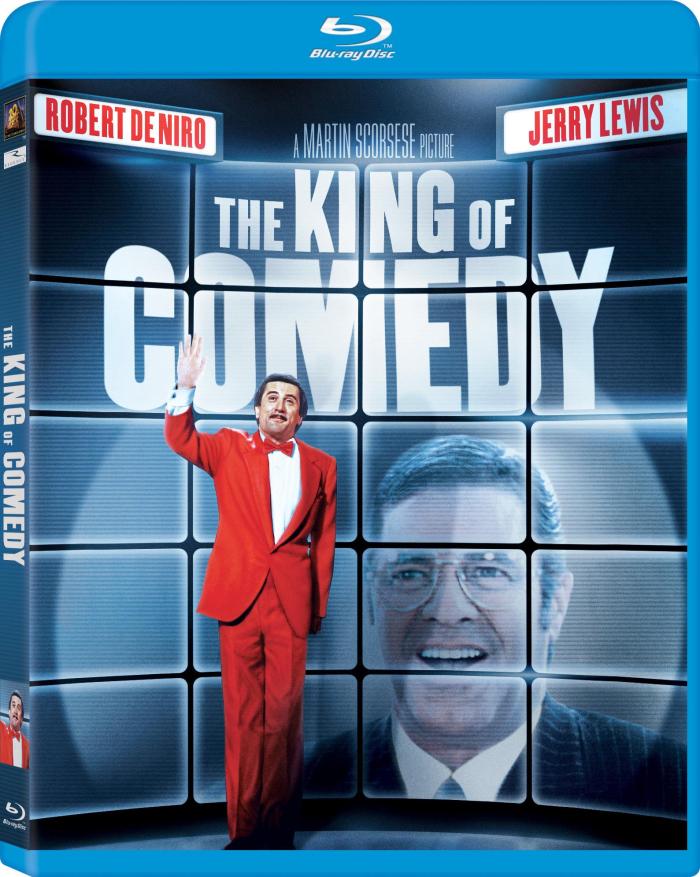 Behold The Kings Of Comedy!

Last year, a classic cinematic reunion took place, and it is the centerpiece of a new, 30th anniversary blu-ray that you must get!

What an amazing event! The Tribeca film festival held the 30th anniversary screening of “The King Of Comedy” last year – and then hosted a “once in a lifetime” discussion afterwards…more on that in a moment, but first: 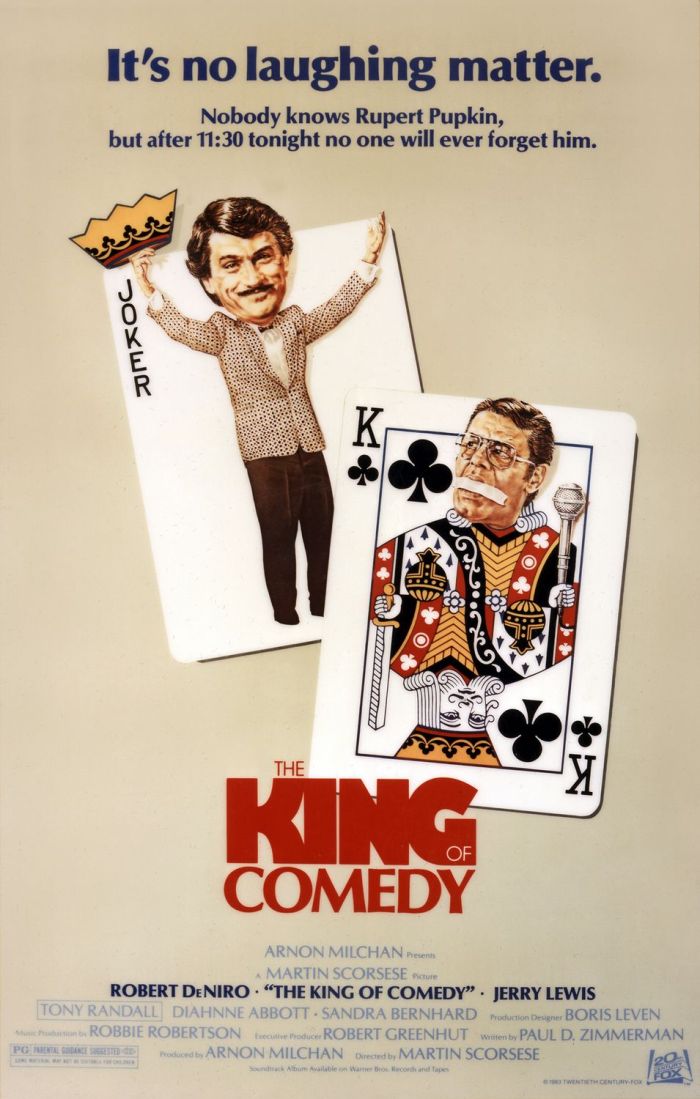 The King Of Comedy

Without a doubt, one of the best films ever made – released in 1982, and the points that the film makes about the relationship between star and fan is never more true today…especially when you consider “how” Rupert Pupkin becomes a “star”…

Rupert Pupkin: “The more scribbled the name, the bigger the fame.”

Robert DeNiro has never been better! DeNiro stars as aspiring comic Rupert Pupkin – who wants to achieve success in showbiz, by ANY MEANS NECESSARY.

Look at the opening title: Talk Show Host Jerry Langford’s hands up against the glare of the cameras – and Rupert Pupkin’s determined look inside the limo – where he yearns to be…

Pupkin idolizes late night King Jerry Langford, played brilliant by legendary comic actor Jerry Lewis…but of course, what Rupert sees as a budding friendship is little more than a fan stalking a star…and the moments when you see Rupert “hosting” his own talk show – in his basement with cardboard cutouts of stars – simply brilliant:

It comes to a head when Langford has to tell Pupkin to leave him alone, which leads to this exchange:

Jerry Langford: Then you’re gonna have idiots like you plaguing your life! 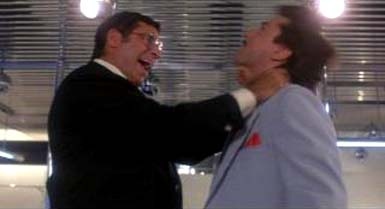 The film really digs into the cult of celebrity – and the price you pay for fame….

When Jerry Langford is walking down the street, he is stopped by a woman talking on the telephone. When Jerry refuses to talk to someone on the phone, the lady says I hope you get cancer. This incident actually happened to Jerry Lewis. According to Scorsese, Lewis directed this segment himself!

And of course, things spiral horribly out of control – as Rupert Pupkin decides there is really only ONE way to become a star – and the film really captures the cult of celebrity and the downside of fame…

Rupert Pupkin: Better to be king for a night than schmuck for a lifetime. 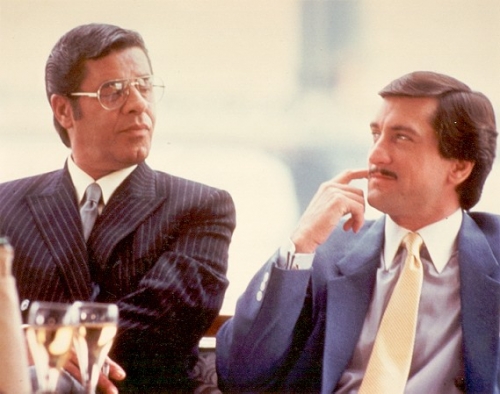 The King Of Comedy Reunion!

To acknowledge the 30th anniversay of this classic film, The Tribeca Film Festival held a screening, followed by a Q&A involving Scorsese, DeNiro and Lewis…

The reunion was a big big night for the Tribeca film festival – especially considering that “King Of Comedy” was a huge box office flop at its time of release – especially since “Raging Bull” had been the previous Scorsese/DeNiro collaboration – and was considered a masterpiece. 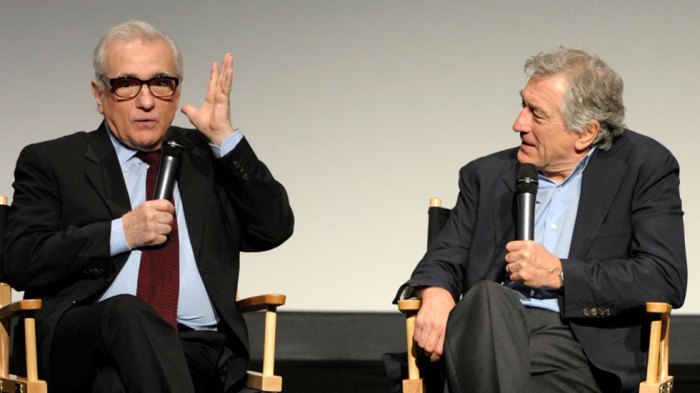 Now, “The King Of Comedy” has grown to become a true masterpiece as well…the only disappointment to the night was Bernhard’s inability to attend:

Bernhard did, however, send a video message to be played at the event…and if you want to hear how “tense” the relationship between Lewis and Bernhard is – here is a link to a great write up from Movieline that details it all…including a short clip from the event!

To celebrate the film’s 30th anniversary, and new blu-ray is out that shows all of the material I just mentioned!

The 30th anniversary of “The King Of Comedy” is now out on blu-ray, with these special features:

Tribeca Film Festival: A Conversation with Martin Scorsese, Robert De Niro, and Jerry Lewis – yes, the entire conversation is included on the blu-ray!

A Shot to the Top: The Making of The King of Comedy – a documentary on the making of this iconic film

Deleted And Extended Scenes – great never-before-seen scenes from the film!

Theatrical Trailer and TV Spot – you know, how they originally sold the film – and a good look at why it didn’t work!

I already have my copy, and if you are a movie fan, you will get yours as well…Congrats to the entire creative team behind this neglected masterpiece!