Ever seen the classic film where Richard Burton seduces the world’s most beautiful women? And then FREEZES THEM?

And Don’t Forget To Cue The Crow!

Intrigued? I thought so! How can you possibly NOT want to spend time with Richard Burton – just to find out exactly WHY he spends SO MUCH TIME in the movie with a crow on his shoulder?

And Raquel Welch Was, Indeed, “The Nun!”

Time to introduce you to “Bluebeard”, a 1972 thriller starring Richard Burton, Raquel Welch, Joey Heatherton and Sybil Danning. It was filmed in Budapest, Hungary and directed by Edward Dmytryk. 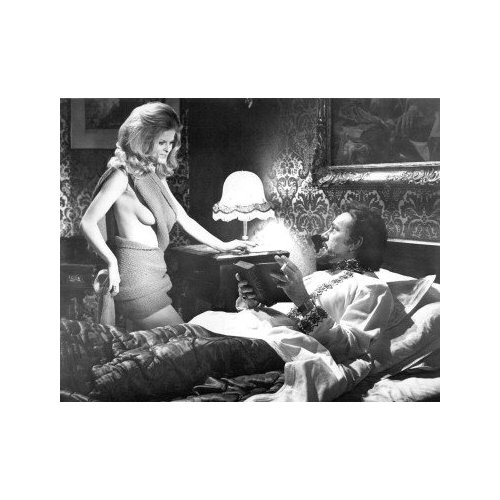 “Bluebeard” is a perfect example of the 70’s genre of film known as “euro-sleaze”, cheap films filmed in eastern Europe full of nudity, sex and violence. That’s why the film is stocked with young starlets like Joey Heatherton!

Richard Burton was clearly slumming in this film, but euro-sleaze fans are all the better for it! Take a look at the movie’s poster!

In case you need this information, here is the plot: A World War I pilot, who everyone envies as a “ladykiller” actually is one – because after he beds and marries a beautiful woman, he murders them – and keeps them in a freezer!

This is the kind of “so bad its good” film that is begins saved more now than ever, thanks to great home video companies who remaster these movies so film buffs can see just how wild the 70’s were for film!

The film is based on the classic story of “Bluebeard” by Charles Perrault – the story of a wealthy aristocrat (Burton) who has murdered several previous wives. And yes, he seduces the sexy Nun Raquel Welch and kills her too!

His latest spouse is sexy Joey Heatherton, who discovers her dead predecessors in a freezer and tries to avoid their fate! 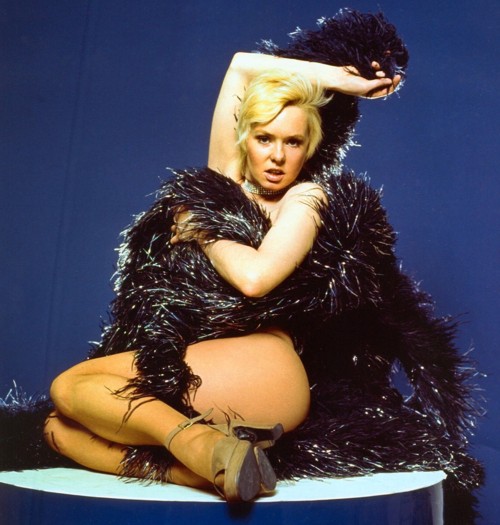 Yep, Superstar Raquel Welch AND young starlet Joey Heatherton co-starred with Burton in this classic slice of sleaze! I guess they paid well!

Burton is onscreen with a multitude of beautiful women, such as Sybil Danning, and everyone had to show nudity or at least wear provocative outfits…

Before you rush out for this Raquel Welch starring role, know this: even though she was top billed second after Richard Burton, Raquel Welch only has 8-minutes of screen time in this two hour long film!

Why I Love Raquel Welch!

“Bluebeard” is just one reason to love Raquel Welch – if you want to see more of her classic roles – including her hilarious appearance on “Seinfeld”, check this out:

This Movie Is NUTS!

The pleasures of “Bluebeard” go way beyond Raquel – the film is a virtual non-stop celebration of sleaze…remember, it’s the story of a celebrated German pilot who has “a way” with women – because he does “away” with them!

Among the trivia about the movie: The various Nazi uniforms in the film are inaccurate – the colors are wrong and even the swastika was turned into a strangely shaped cross.

This may have been for legal reasons, because in Germany the use of Nazi emblems is strictly regulated.

And in case European audiences didn’t understand just HOW sleazy this film was, they made sure to put a crazed Burton staring at a naked woman on the poster as well! Enjoy!

If you think this was Burton’s only bad career choice, you are sadly mistaken:

Yes, two years later he was starring with fellow movie legend Lee Marvin – AND OJ SIMPSON – in “The Klansman”, which is just as offensive as you think…see more here: 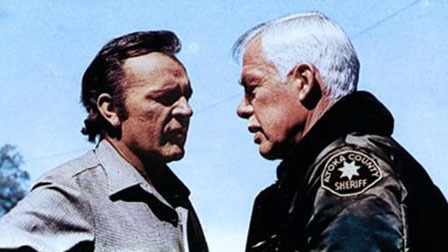