Ann and Nancy Wilson of Heart are releasing their autobiography!

Look At The Stats!

Heart have released more than a dozen albums, selling 35 million records worldwide. Now, Ann and Nancy are releasing their story…here is what Amazon has to say:

The mystery of “Magic Man.” The wicked riff of “Barracuda.” The sadness and beauty of “Alone.” The raw energy of “Crazy On You.” These songs, and so many more, are part of the fabric of American music.

Heart, fronted by Ann and Nancy Wilson, has given fans everywhere classic, raw, and pure badass rock and roll for more than three decades. As the only sisters in rock who write their own music and play their own instruments, Ann and Nancy have always stood apart—certainly from their male counterparts but also from their female peers.

By refusing to let themselves and their music be defined by their gender, and by never allowing their sexuality to overshadow their talent, the Wilson sisters have made their mark, and in the process paved the way for many of today’s female artists. 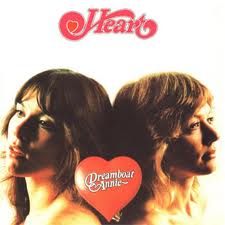 In “Kicking and Dreaming”, Ann and Nancy, with the help of critically acclaimed and bestselling music biographer Charles R. Cross, recount a journey that has taken them from a gypsy-like life as the children of a globe-trotting Marine to the frozen back roads of Vancouver, where they got their start as a band, to the pinnacle of success—and sometimes excess.

In these pages, readers will learn the truth about the relationship that inspired “Magic Man” and “Crazy On You,” the turmoil of inter-band romances gone awry, the reality of life on the road as single women and then as mothers of small children, and the thrill of performing and in some cases partying with the likes of the Rolling Stones, Stevie Nicks, Van Halen, Def Leppard, and other rock legends.

Here they are performing their first big smash hit on Midnight Special in 1977:

It has not always been an easy path. Ann struggled with and triumphed over a childhood stutter, body image, and alcoholism; Nancy suffered the pain and disappointment of fertility issues and a failed marriage but ultimately found love again and happiness as a mom.

You may not know, but Nancy was married to film maker Cameron Crowe, who directed “Jerry Maguire” and the best movie EVER about music, “Almost Famous.” He also wrote the non-fiction classic “Fast Times At Ridgemont High” after going undercover at a California high school for a year…

This is the song that made them superstars….as full of pure rock adrenelin as anything Led Zeppelin did, but channeled through the power of two strong woman….this live performance is from the “Ellen” show, when Heart shows up to play the song live after Ellen tries to play the Guitar Hero version…

Here is one of my favorite Heart songs: the classic rock anthem “Mistral Wind”, performed by Heart in 2002 in their home town of Seattle – with an energetic guitar by Nancy Wilson, and the best female vocals in rock by Ann:

In addition to the book, Amazon has a great compilation – I own most of their music anyway, but I was drawn to the extensive amount of live and demo material in this…. 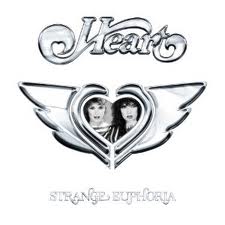 Here is a writeup on what makes this collection unique:

“Strange Euphoria” is a 3-CD, 1-DVD set that expands across Heart’s entire recorded legacy, including hits, album sides, live performances, demos and rarities. And rounding out the Wilsons’ legacy are solo selections and a pair by the Lovemongers. All together, twenty of the CDs’ fifty-one tracks are previously unreleased, and the DVD serves up a fifty-five minute live performance recorded in 1976 at Washington State University’s television station, KWSU.

The opening instrumental of this vintage performance, as well as a scorching version of “Sing Child Sing,” shows the group’s progressive colors, but as they kick into “Heartless,” it’s clear that Heart was ready to rock. Hard. With the band’s debut album just released, they had the goods, but not yet the fame the album’s hits would bring.

The video’s lighting, camera work and mono sound are good, and the picture (including some primitive special effects) holds up well for something no one probably thought would become historically important.

The CD set begins the Wilsons’ very first single, “Through Eyes and Glass” recorded as Ann Wilson & The Daybreaks in 1968, and released locally on the Topaz label. Key elements of Heart can be heard in the elder Wilson’s voice and flute, though the brooding mood is more connected to 1960s ballrooms than 1970s arenas. Skipping ahead to mid-70s demos, it feels as if the gauze of `60s acid culture has been lifted. Even in this early form, “Magic Man,” crackles with passion in both the rhythm and vocals. There’s a healthy dose of neo-psych in the guitar solo, but the song is undeniably powerful and anthemic.

Though the box set covers songs from all thirteen Heart studio albums, they’re presented in a mix of studio, live and demo versions.

Finally, Heart has a new CD coming out in early October as well, call “Fanatic”..can’t wait to hear it!

I love music, and always interested in the stories about how the music was made – I cannot wait to read this story…and listen to some classic Heart at the same time!