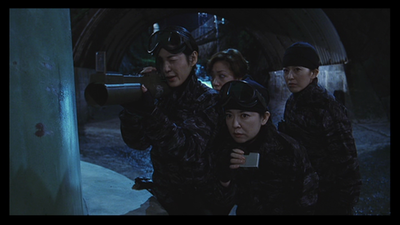 In other words, are you in the mood for some crazy Asian cinema? Well, you are in luck! Here’s a perfect name for a movie that totally fits the bill:

This 2003 drama from Japan is a very interesting hybrid: it’s a serious dramatic look at social upheaval in Japan – and it is an over-the-top gore fest, with one of the most unbelievable ending you will ever see!

This is one crazy movie!

“Karaoke Terror” deals with two very different groups; the Midoris, named so because all the middle-aged and divorced women share the name Midori, and a group of young college-aged men.

Both groups love karaoke, particularly singing ‘oldies,’ the Midoris in bars populated with young men, and the boys in costume with a sound system on a pier.

Their paths are doomed to cross when one of the boys murders a member of the Midoris, because she rejected a sexual advance. With authorities unsure as to who is the culprit, the Midoris find a clue and successfully discover who the murderer is among the boys. And as you can see, they decide to take revenge!

When the boys discover who did it, they strike back – and then, so do the ladies! 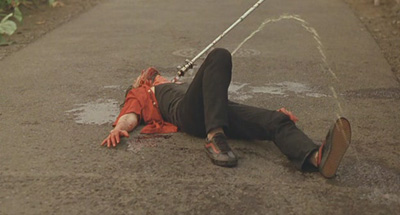 The movie showcases how middle-aged women in Japan are considered worthless, outcasts in their own country. This quote from the movie confirms the feeling that men have about unmarried midde-aged women.

Hirota – the Shop Owner in Gunma: “People say that only cockroaches will survive when the earth perishes. That’s a lie. It’s middle-aged women!”

As they battle back and forth, the stakes escalate until you have the most amazing ending to a movie ever! This is a crazy, thoughtful, and weirdly entertaining film worth finding!

The Girl in All Leopard
robertawrites235681907.wordpress.com/
Robbie's inspiration