Yes, here’s the spectacular 180 degree view of Manhattan to the left and Brooklyn to the right – with the East River in between – from atop the Brooklyn Bridge!

What, you didn’t know that you could walk across this iconic bridge? Well, you can, and here are three things to know:

Oh, and when you cross over, this is your view of Manhattan from Brooklyn: 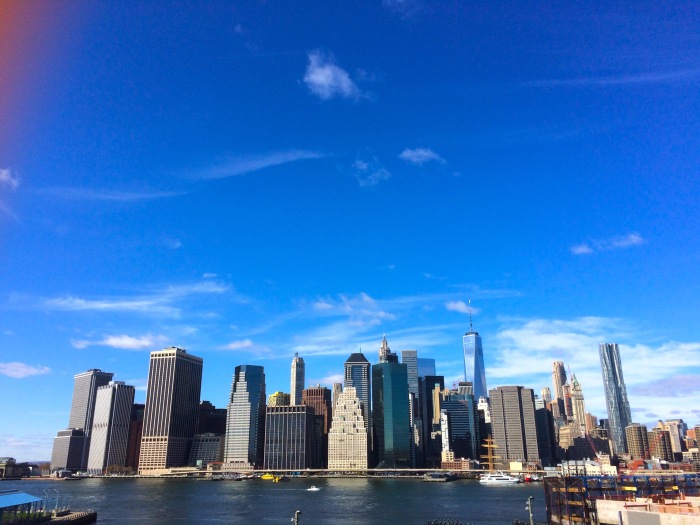 That’s right, for the ultimate view of lower Manhattan, any trip to New York MUST include a walk across the iconic Brooklyn Bridge!

For this edition of “Hitch Hiking”, I’m going to take you across the East River to Brooklyn, then we’re going to take “39 Steps” with Alfred Hitchcock! 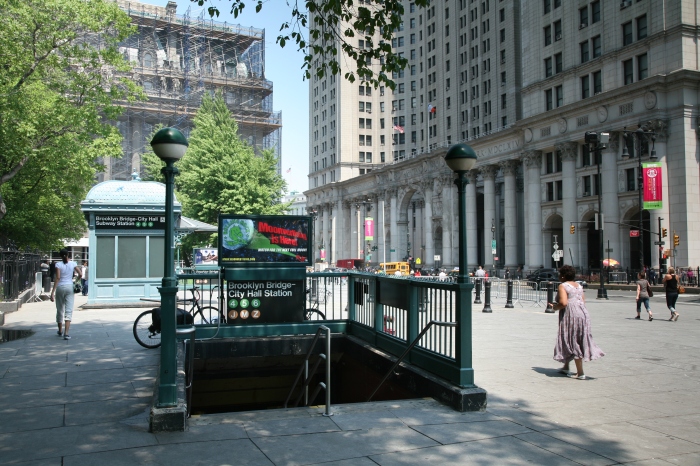 Getting to the Brooklyn Bridge is a breeze: the subway stop lets you out a few steps away from the bridge, which is clearly marked to show you where the pedestrian access is:

Second, It’s A Blast To Do With Other Tourists And New Yorkers!

You have plenty of other people crossing along with you, but there’s a celebratory feel to it!

Here are some fun details:

The Brooklyn Bridge is a hybrid “cable-stayed/suspension bridge” in New York City. It connects the boroughs of Manhattan and Brooklyn, spanning the East River. The Brooklyn Bridge has a main span of 1,595.5 feet, and is 133 ft above the river…

As you can see, it’s a terrific, car-free level with incredible views of the bridge itself!

The Brooklyn Bridge started construction in 1869 and was completed fourteen years later in 1883.

Including the approaches on both sides, the Brooklyn Bridge is 6,016 feet long, so about 6,016 steps! 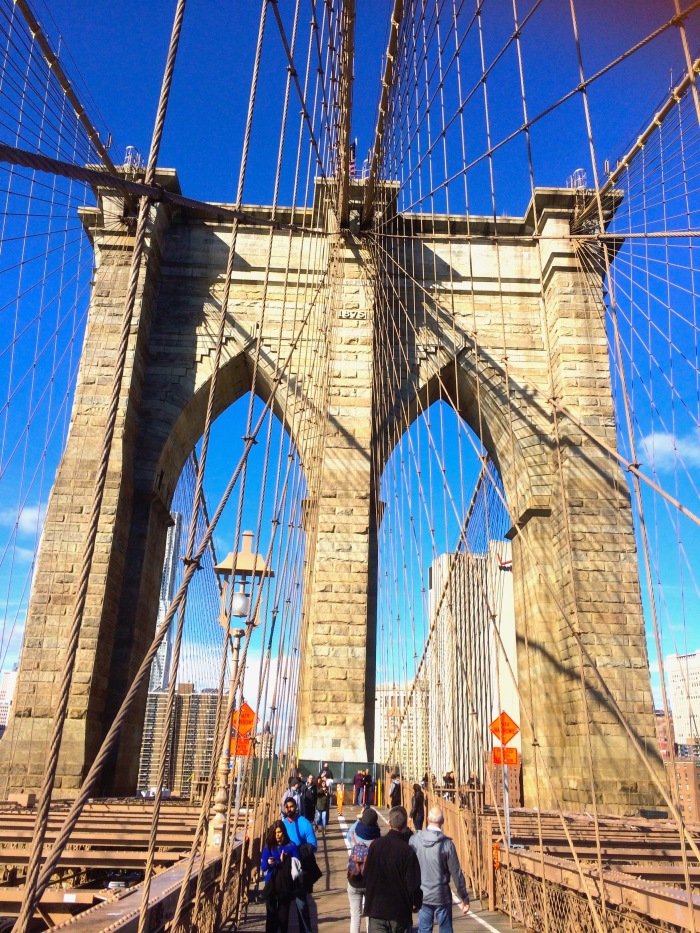 It’s easy to take a MILLION photos as you cross!

The Brooklyn Bridge is one of the oldest roadway bridges in the United States and was the world’s FIRST steel-wire suspension bridge, as well as the first fixed crossing across the East River.

As you can see, the Freedom Tower is clearly visible from the bridge as you cross it:

The Bridge is supported by four main cables, which descend from the tops of the suspension towers and help support the deck.

These wires are bundled in 19 individual strands, with 278 wires to a strand. This was the first use of bundling in a suspension bridge, and took several months for workers to tie together!

Once you cross over, the fun continues!

A short walk north of the Brooklyn Bridge reveals the Manhattan Bridge, and a very cool pop culture piece of art! 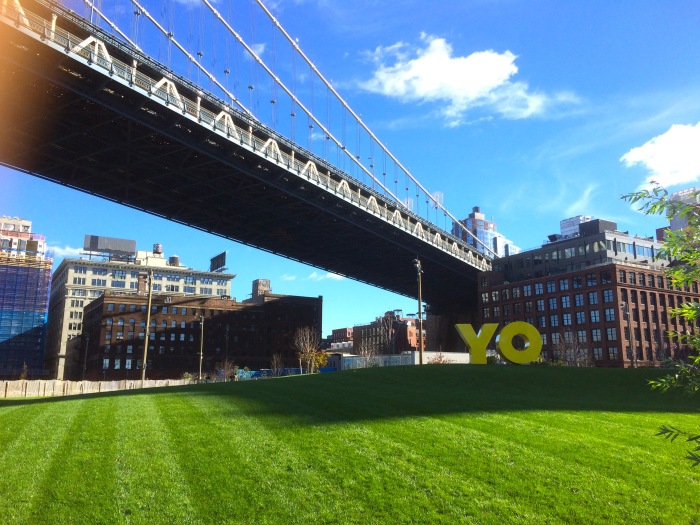 It’s the question you can ask yourself as you travel just north of the Brooklyn Bridge when you come to Brooklyn Bridge Park – where there is a unique art installment that looks out on TWO separate bridges: these two large yellow letters, visible from both Manhattan and Brooklyn. When facing Brooklyn, the letters read “yo.” When facing Manhattan, they spell “oy.”

And based on where you stand, you can see the Manhattan Bridge to the right of the words, or as you see here, by looking to the left you see the Brooklyn Bridge!

The Artist says the distinction is simple. 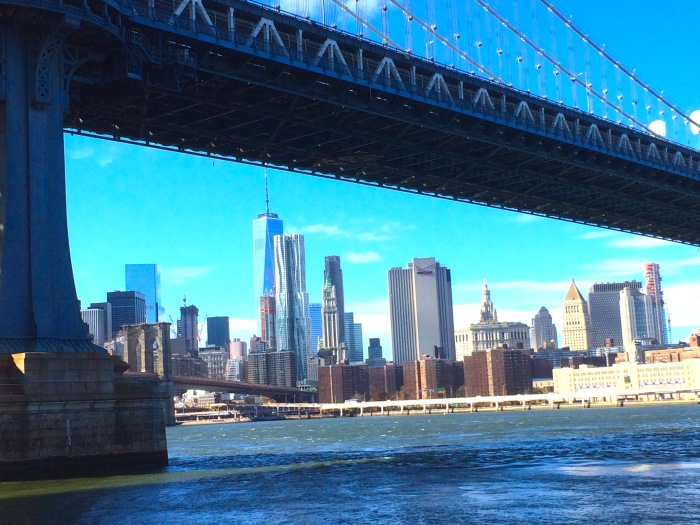 Now, walk down to the water, and you can see the Manhattan Bridge in the foreground and right behind it the Brooklyn Bridge!

Then, walk down a side street and the Manhattan Bridge towers above you while the Brooklyn Bridge beckons as well! 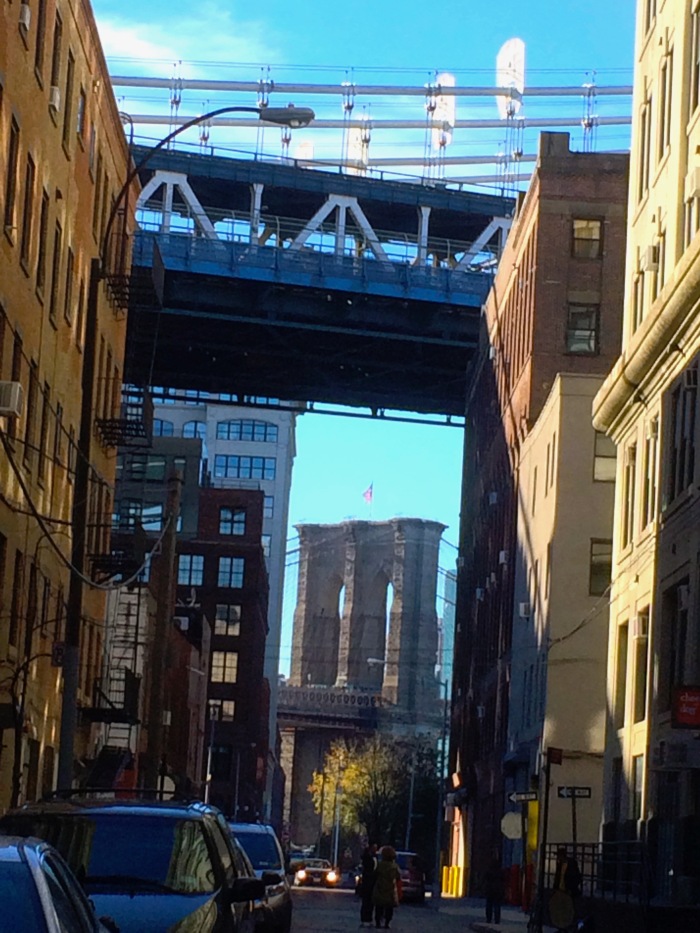 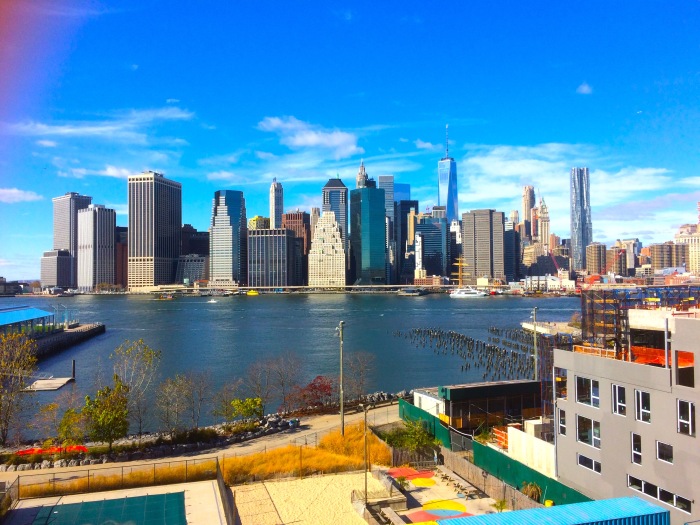 Before you head back to Manhattan, stop and get one more view of that magnificent island, and then as you head back, Lady Liberty pops her head up as well:

As you walk back, a look south reveals that the Statue Of Liberty is clearly visible as well – it’s just a spectacular hike!

After such a long walk to Brooklyn and back, what’s 39 more steps? In this case: a killer!

After hiking across the Brooklyn Bridge, it seems only fitting to celebrate one of Alfred Hitchcock’s greatest films that had walking in the title!

“The 39 Steps” is one of Hitchcock’s earlier films: a 1935 British thriller that starred Robert Donat and Madeleine Carroll. 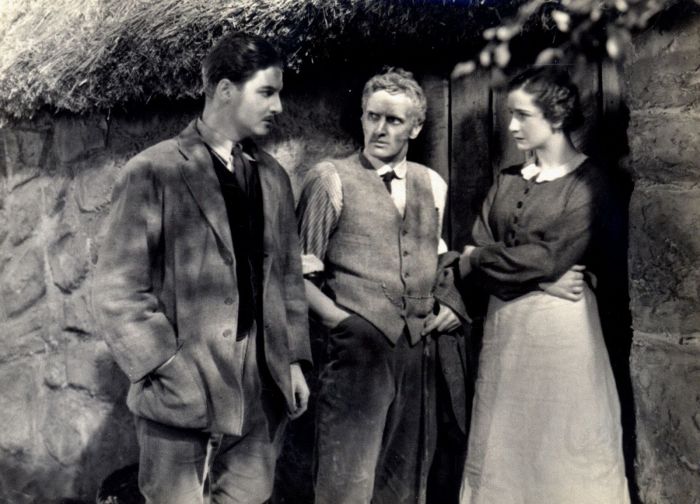 A London man, played by Donat gets mixed up with an organization of spies called the 39 Steps – and after being wrongly accused of murdering a spy, he goes on the run to Scotland – and meets Madeleine Carroll, while to stop the spy ring and clear his name.

“The 39 Steps” is an early Hitchcock classic, named the 4th best British film of the 20th century by the British Film Institute!

Legendary filmmaker Orson Welles referred to the film as a “masterpiece”.

Screenwriter Robert Towne remarked, “It’s not much of an exaggeration to say that all contemporary escapist entertainment begins with The 39 Steps.”

Well, my “escapist entertainment” began with these 6,000+ steps across the Brooklyn Bridge!

It’s not my first “Hitch Hike” in New York – remember my 196 stroll through the big apple? 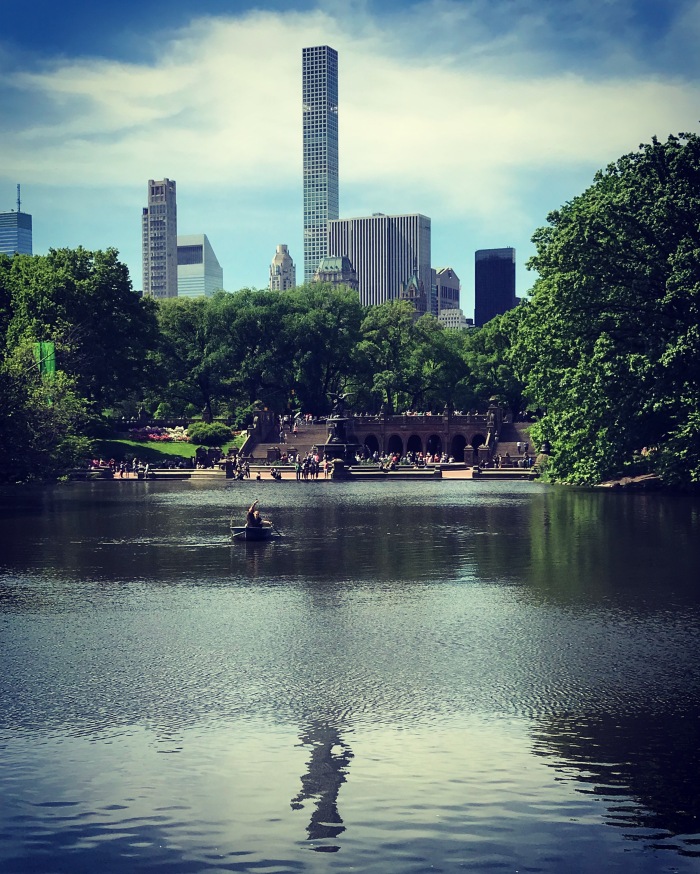 I walked 196 blocks, and the place it will take you, like the city’s magnificent Central Park…click here to see that entire journey:

Leave a comment and let me know if you’ve crossed the Brooklyn Bridge!