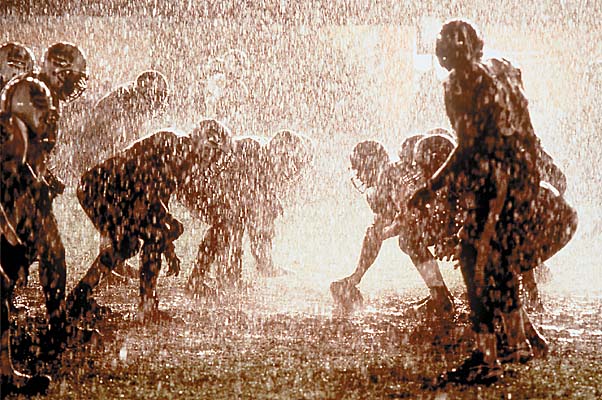 America’s Gladiators Are Back!

It’s time to celebrate the upcoming NFL season – a time when ANY team can be the Super Bowl champ – records are waiting to be broken, dark horses will rise up, legends will be made….well, in theory at least – in the weeks and months ahead, many fans will begin a slow descent into despair, defeat and resignation…but for now, any team can win it all, and to honor those hopes and dreams, I’ve got some great NFL football movies!

First, a few important caveats: I can’t include one of my favorite football movies, “Friday Night Lights” – because it is about high school football – same thing about “Remember The Titans”… 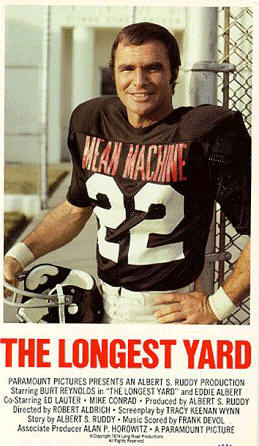 Even though it is one of Burt Reynold’s best movies, and a GREAT film, I won’t include “The Longest Yard” because it takes place in a prison…even if he is a disgraced NFL Quarterback… 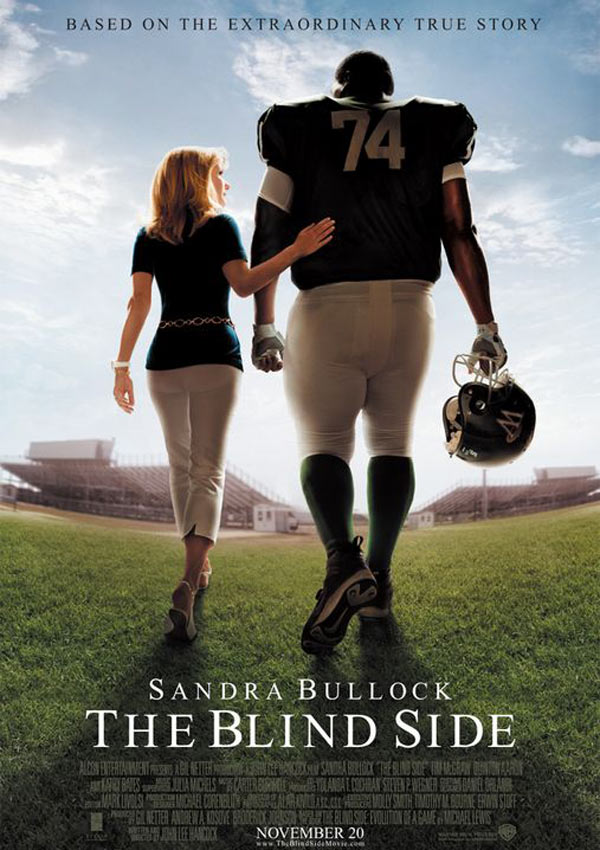 Finally, don’t be angry Alex, but I can’t include “The Blind Side” because it’s about college football, even if he ends up in the NFL at the end!

These are all great sports movies, but here are four that are specifically about the NFL – even if in one case the NFL didn’t like the attention!

Let’s start with an uplifting tale of an unlikely NFL star: 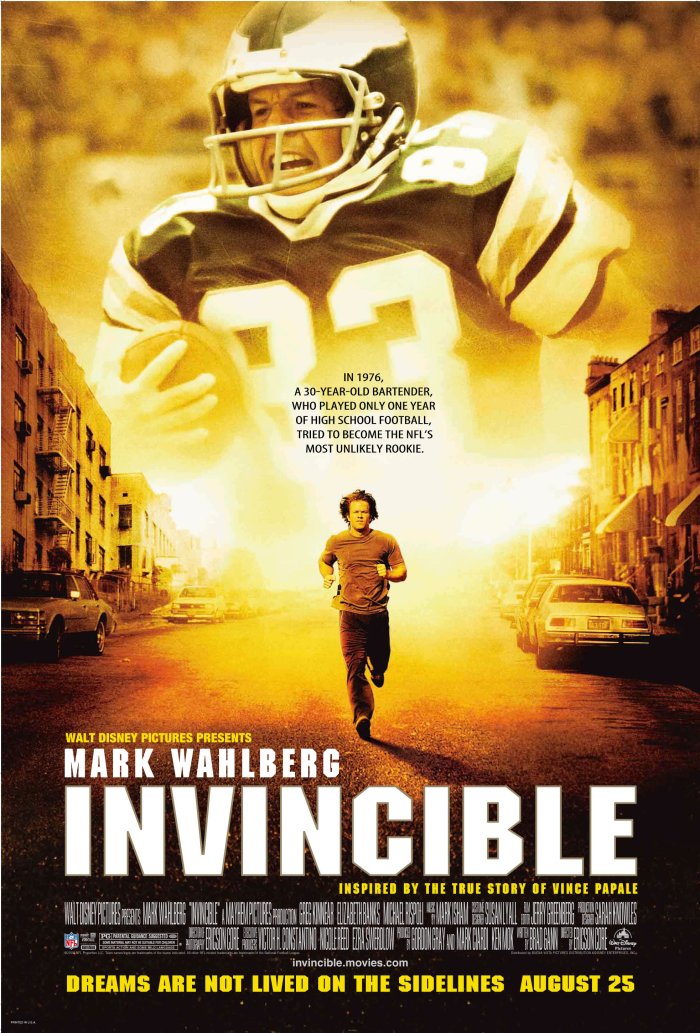 Here’s an uplifting film that celebrate the ability of anyone to succeed – and it’s based on a true story!

In the summer of 1976, 30-year old Vince Papale works as a bartender and plays football with his friends. Cue Mark Wahlberg, who gives a terrific performance as Papale, as the film documents his unlikely journey to the NFL! 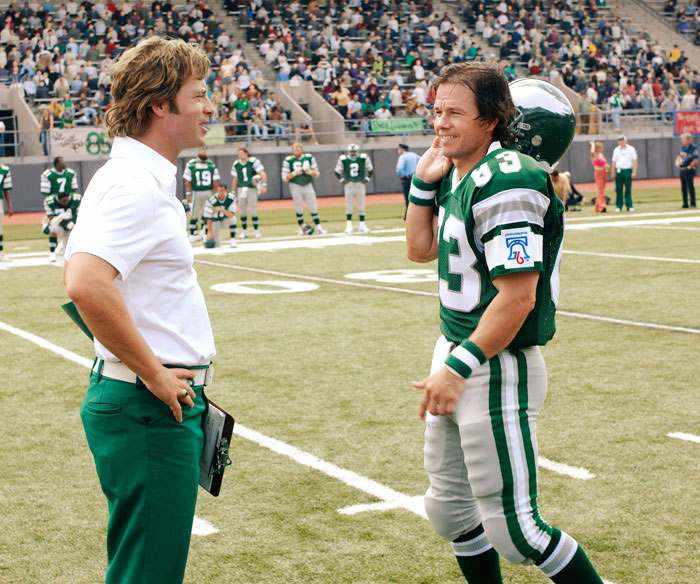 When the the new coach of the Philadelphia Eagles, Dick Vermeil (played by Greg Kinnear), announces that he will hold open tryouts for the team, Vince reluctantly decides to give a try. Enter Greg Kinnear in another great performance, this time as the desperate coach…

Papale goes to the tryouts and amazingly, makes the team! 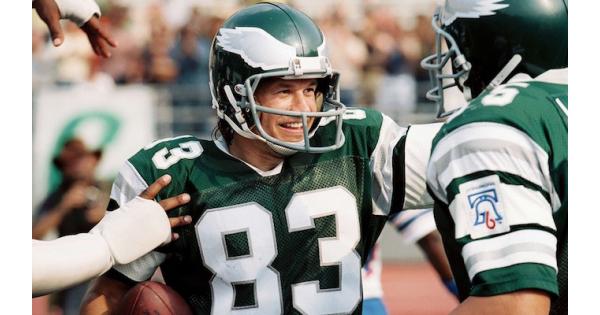 Although listed as Wide Receiver, Papale played almost exclusively on Special Teams. The only reception in his career came in 1977 on a 15 yard pass from Roman Gabriel. 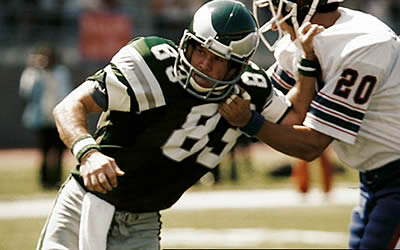 This is a great, uplifting story, and the film had the support of the Philadelphia Eagles and the National Football League. That’s not always the case, as you will soon see.

Now, let’s go to one of the most successful romantic comedies of all time, which just also happens to be a great sports movie as well! 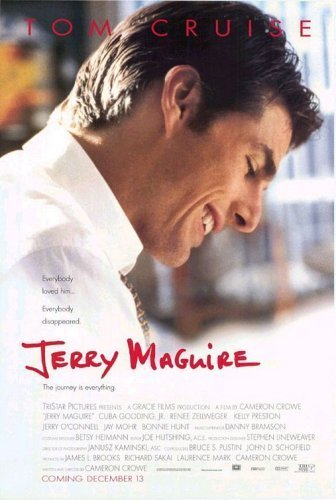 You know this line:

“Show Me The Money!”

And you know this one as well:

OK, I know these are two of the most recognized movie lines in history, but there’s a reason: they speak to terrific characters who are compelling, funny, dramatic and poignant. And it’s about football! 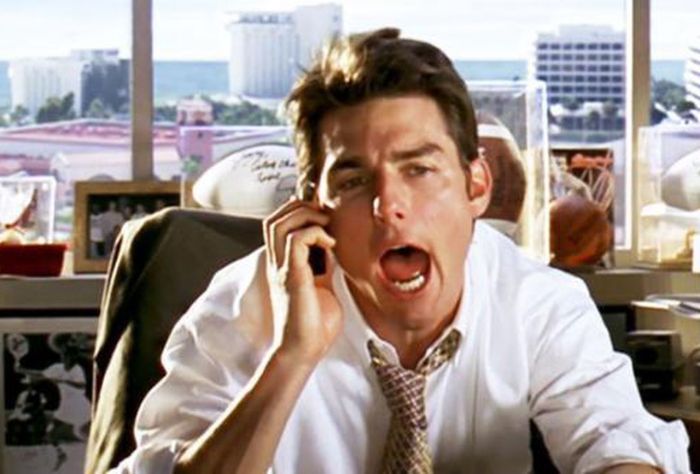 Tom Cruise is Jerry Maguire, a slick and successful sports agent. Until one night he questions his purpose. His place in the world, and finally comes to terms with what’s wrong with his career and life. Oh, which promptly gets him fired… 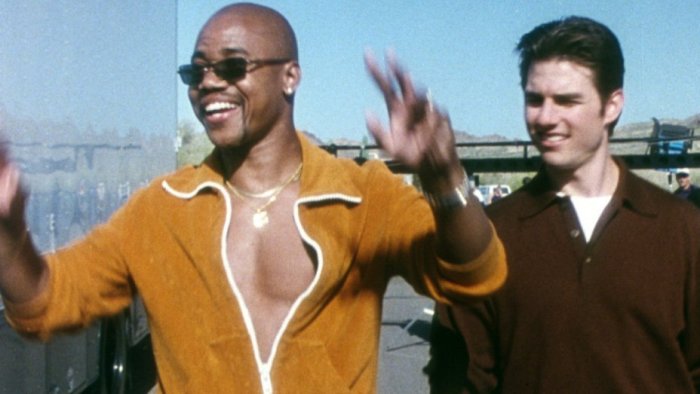 Jerry ends up with only one volatile client Rod Tidwell, a veteran wide receiver for the Arizona Cardinals, who carries the NFL’s biggest chip on his shoulder.

Cuba Gooding Jr. deservedly won the Oscar for his supporting role as a player who wants a taste of fame and fortune before his career ends…leading to the now iconic conversation between Cuba and Cruise, where the player asks his Agent to step up and deliver for him: 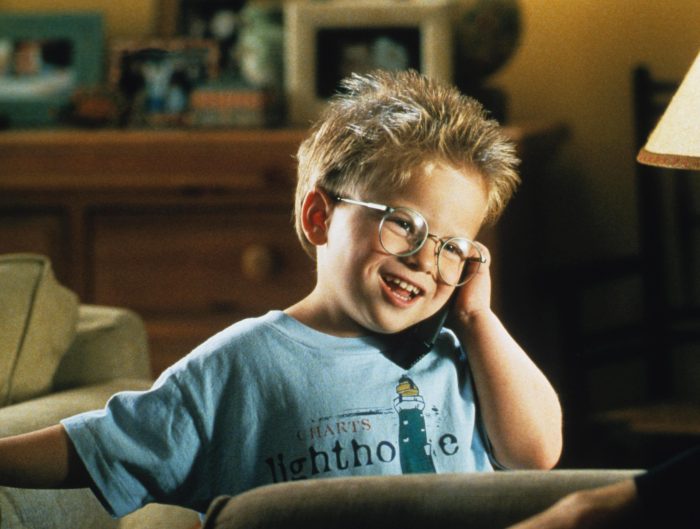 The adorable little boy, Jonathan Lipnicki, showed up on the set one day telling everyone that, “the human head weighs eight pounds”. Cameron Crowe liked it so much he wrote it into the script. 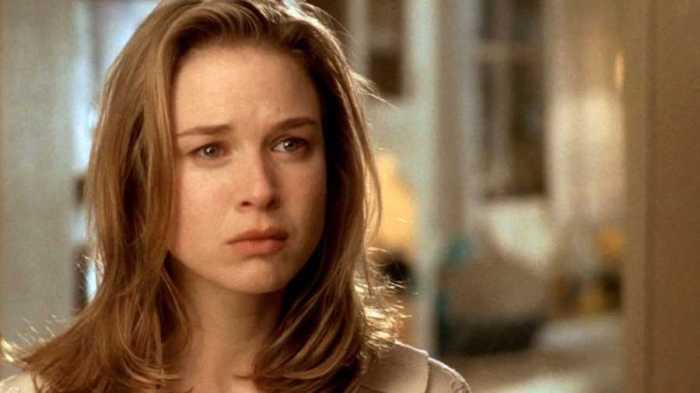 Renee Zellwegger gets to deliver the film’s other signature line as Jerry rattles on for a full minute, only to be stopped short by her reply:

Finally, Jamie Foxx auditioned for the role later given to Cuba Gooding Jr.. don’t worry, Foxx shows up in his own classic NFL movie, thanks to Oliver Stone… 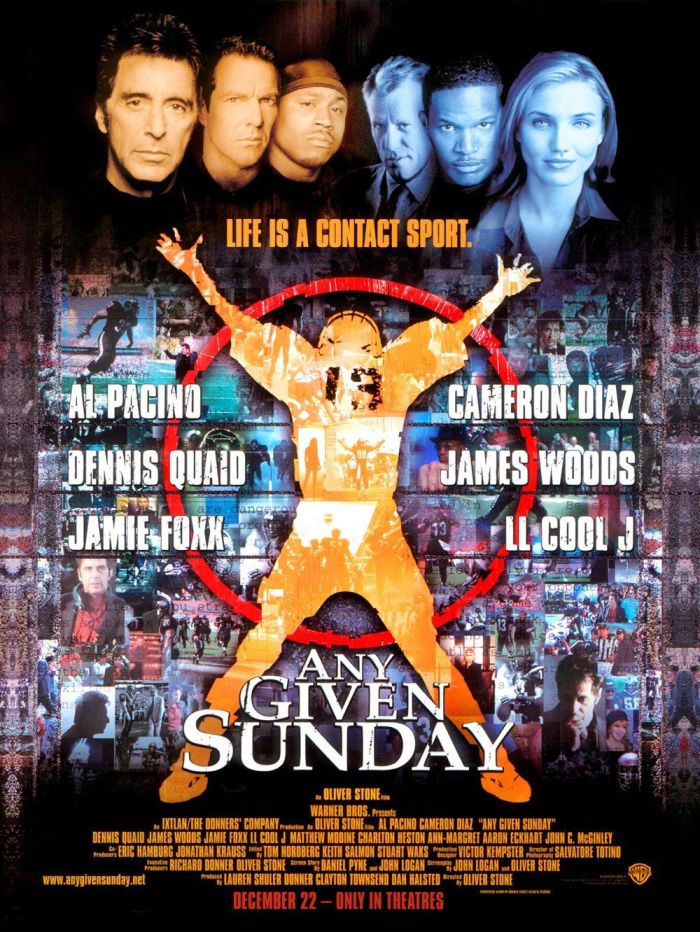 Leave it to Director Oliver Stone to take a look at the NFL-as-modern-day-Gladiators…an intense, in-your-face action movie…here is the trailer:

Oliver Stone of course also directed “Born On The Fourth Of July” and “Natural Born Killers”…what a surprise that the NFL had no interest in his take on their sport? 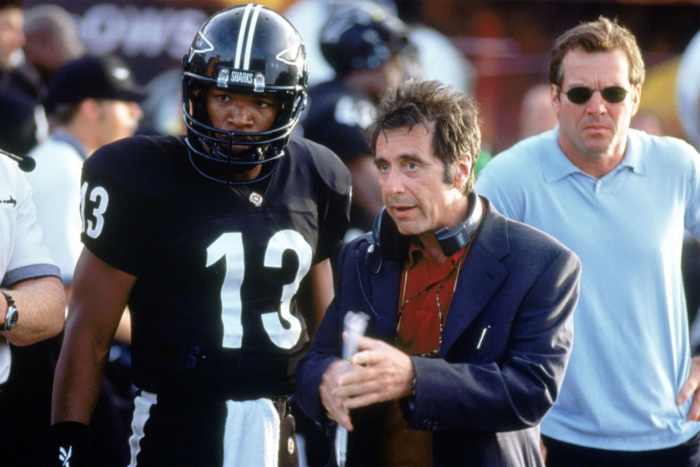 Aging NFL Coach Tony D’Amato – portrayed “at eleven” by Al Pacino – must overcome the injury to his star Quarterback by giving a shot to the coky young QB, Jamie Foxx.

This is a classic story, as Pacino must reevaluate his time-tested values and strategies and begin to confront the fact that the game, as well as post-modern life may be passing him by.

Adding to the pressure on D’Amato to win at any cost is the aggressive young President/Co-owner of the team, Christina Pagniacci, now coming into her own after her father’s death…yes, that’s Cameron Diaz as an NFL owner…

Director Oliver Stone tried and failed to get the National Football League’s permission to use real NFL team logos and stadiums for the film. 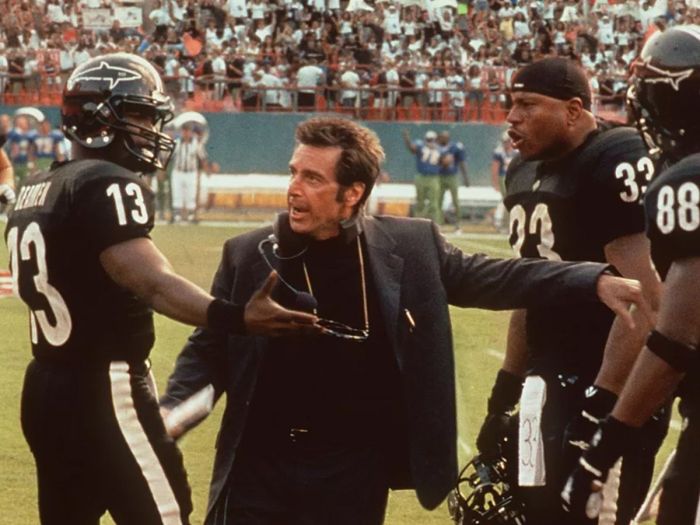 According to Stone, the NFL actively attempted to prevent players taking part in this project.

Made up team names or not, this monologue tells you all you need to know about how Stone equates modern football players with warriors:

“You find out life’s this game of inches, so is football. Because in either game – life or football – the margin for error is so small. I mean, one half a step too late or too early and you don’t quite make it. One half second too slow, too fast and you don’t quite catch it. The inches we need are everywhere around us. They’re in every break of the game, every minute, every second. On this team we fight for that inch. On this team we tear ourselves and everyone else around us to pieces for that inch. We claw with our fingernails for that inch. Because we know when add up all those inches, that’s gonna make the fucking difference between winning and losing! Between living and dying!”

Yes, these NFL players were warriors…but what happened when these warriors refused to talk the field? 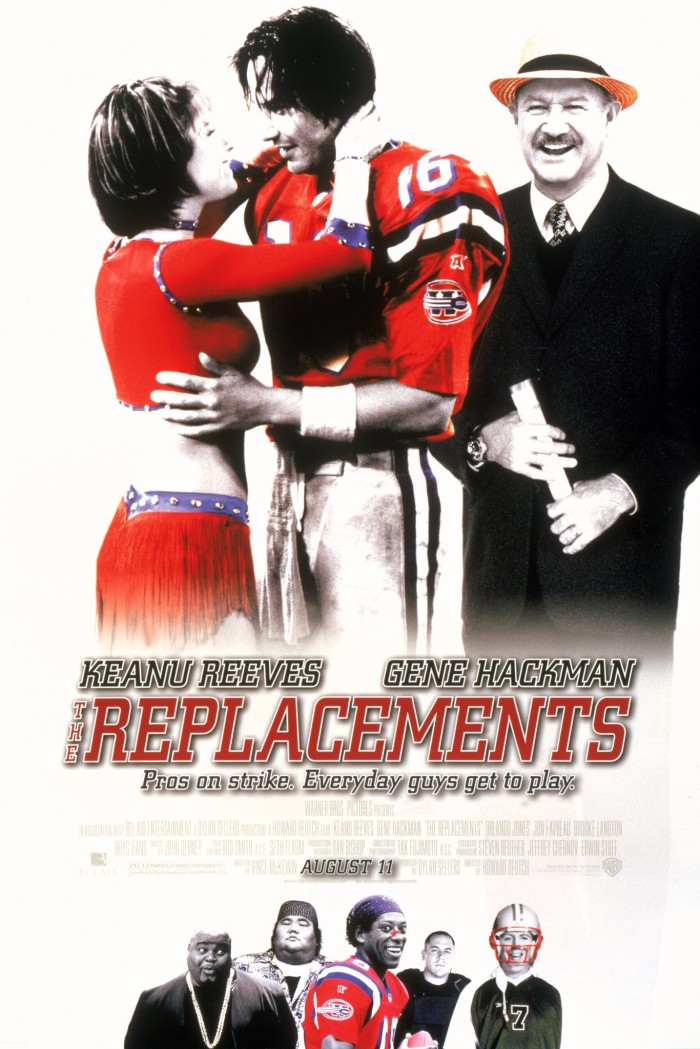 That’s right: they got replacements! This 2000 film is based on the 1987 professional football players’ strike. When that happened, the NFL had to go out and find replacements, and in this case they did a great job! 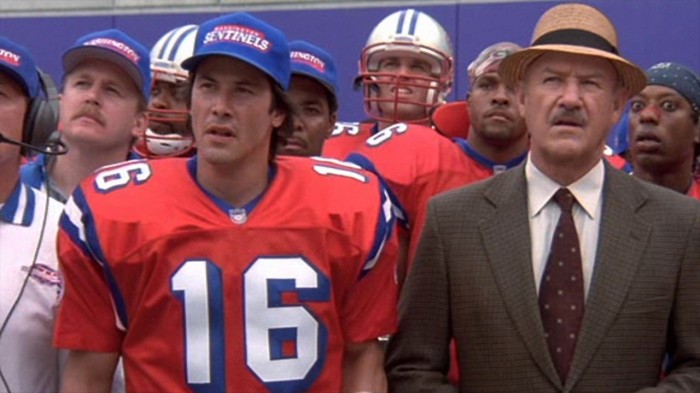 Gene Hackman plays the coach of the team, and Keanu Reeves is the “scab” who replaces the star QB. I have posted about Gene Hackman before, but his retirement from acting has really left a hole in film…he was so good at everything he did… 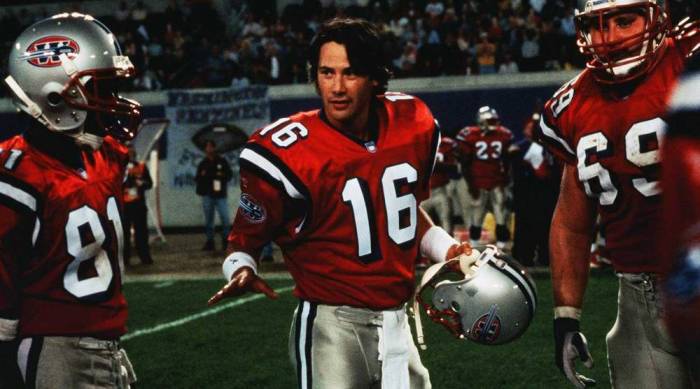 And I really like Keanu Reeves as well – he brings a natural likeability to his role here – a failed college QB who gets a shot, however briefly, at redemption…

The movie was loosely based on the 1987 NFL strike, specifically the Washington Redskins, who won all three replacement games that year without any of their regular players, going on to win Super Bowl XXII at the end of the season. 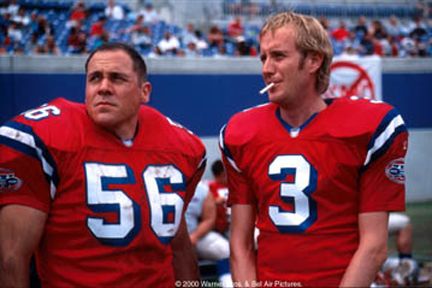 Then you have replacement linebacker Danny Bateman – played by Jon Favreau — A reserved, almost reticent man during normal interaction with people, but when placed in an adversarial situation, goes completely berserk, particularly if he sees the color red.

[Danny has tackled Shane during practice]
Jimmy McGinty: Good hit. Danny, in practice we don’t hit the guys in the red shirts.
Daniel Bateman: I know, Coach, but I see that red and I just wanna go after it, like a bull, you know?

A great movie about a unique side of the NFL…finally, I have this bonus for you: 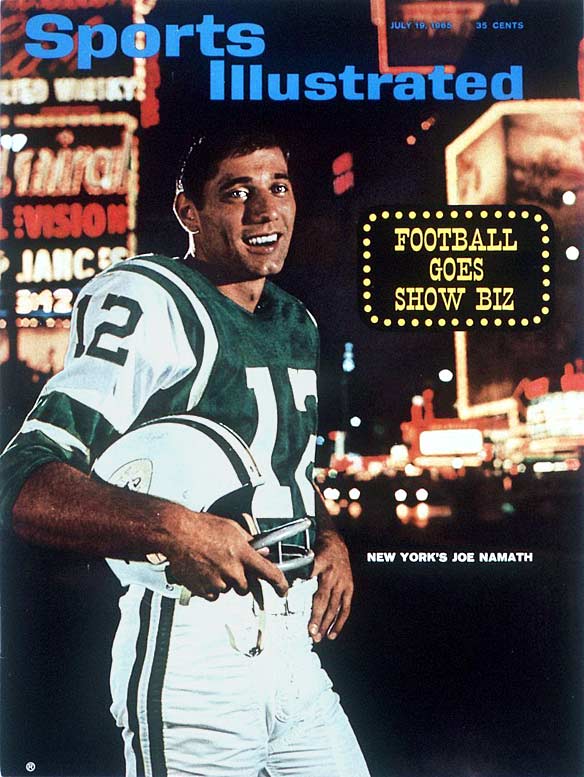 Yes, the legendary Joe Namath took New York by storm in the late 60’s, culminating in the biggest upset in Super Bowl history, when he guaranteed a win against the legendary Baltimore Colts! 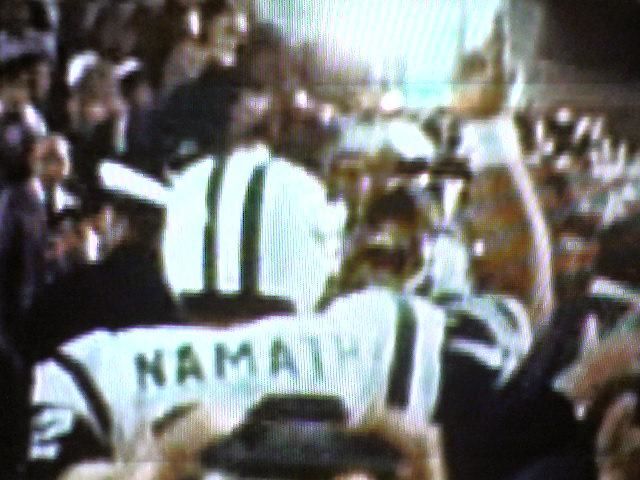 When Namath pulled off the huge upset, he was a superstar…so what did he do: make a movie! 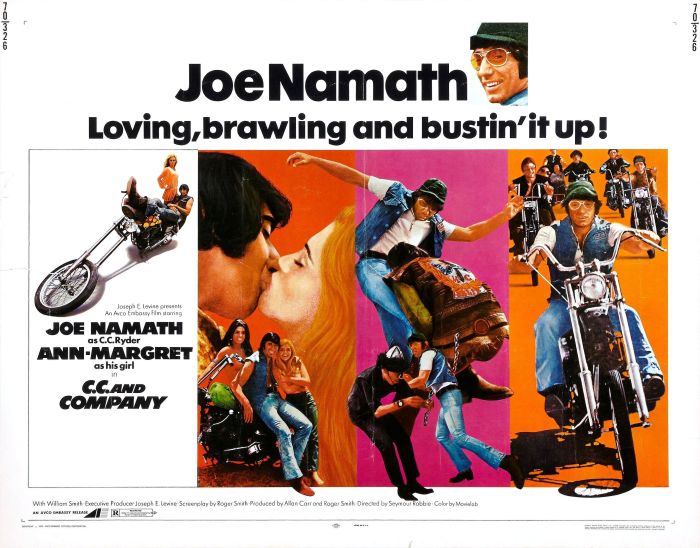 OK, you want to know more, RIGHT? Click here to see the trailer for “C.C & Company!”

Let’s celebrate the upcoming season by diving into these NFL film classics!

Like Loading...
‹ “IT: Chapter Two” Is Here! Time To Countdown 7 Great Stephen King Adaptations! “Carrie” Casting! “Shining” Secrets! Zihautanejo Directions!
“Songs For Sunday” In The Key Of The Kelly Clarkson Show! Kelly Sings On Her New Talk Show – Here Are Some Of Her Best Songs! ›