The Apple Pan Lives On!

Drive down Pico Boulevard in West Los Angeles and you see this distinctive sign – a classic restaurant that’s been serving burgers and pies up for more than 70 years!

For fans of classic LA haunts, it was surprising – and great – news recently when The Apple Pan was sold. Normally in Los Angeles, that means immediate closure, but in this case -it was great news!

The Apple Pan has been a fixture on Pico Boulevard near Westwood Boulevard since 1947 – 72 years. And the recent sale ensures it will continue to serve burgers and pies to a whole new generation! 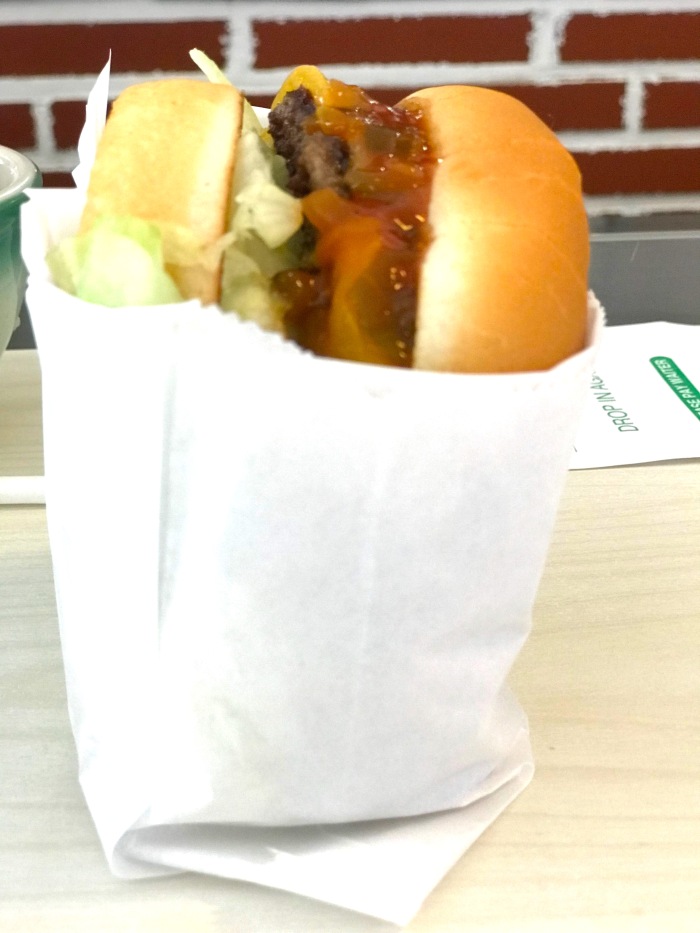 The Apple Pan’s unique wrapper shows off your burger as it’s set down in front of you, and has for decades.

Former owner Sunny Sherman, the granddaughter of the original founders, confirmed to LAist that the burger parlor has been sold to Irving Azoff and his wife Shelli.

Azoff, 71, has an incredible career in entertainment, including managing The Eagles for 40 years. In recent years, many classic LA eateries have shuttered, and this is great news for anyone who wants to keep a bit of the local history alive.

Owner Sherman to LAist that after three generations of operating the family business, it was time to put her own family first again.

Initial reports state the Azoffs are longtime customers of The Apple Pan and have no plans to change or close the restaurant. 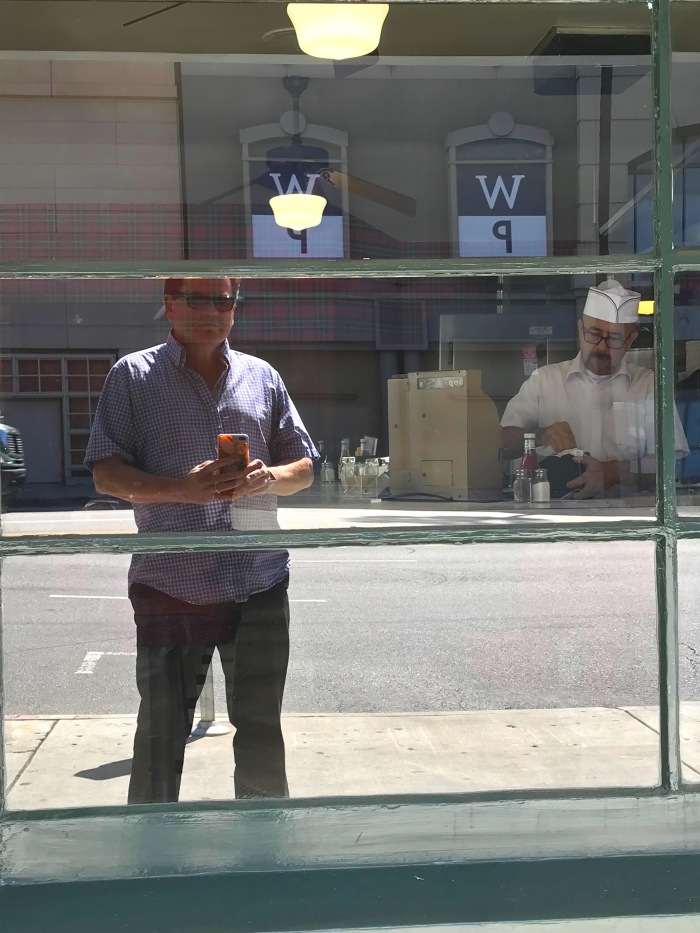 Here I am killing time, waiting for the doors to open at exactly 11a. Then, I head in, grab a comfortable leather seat, and gaze lovingly at the pies: 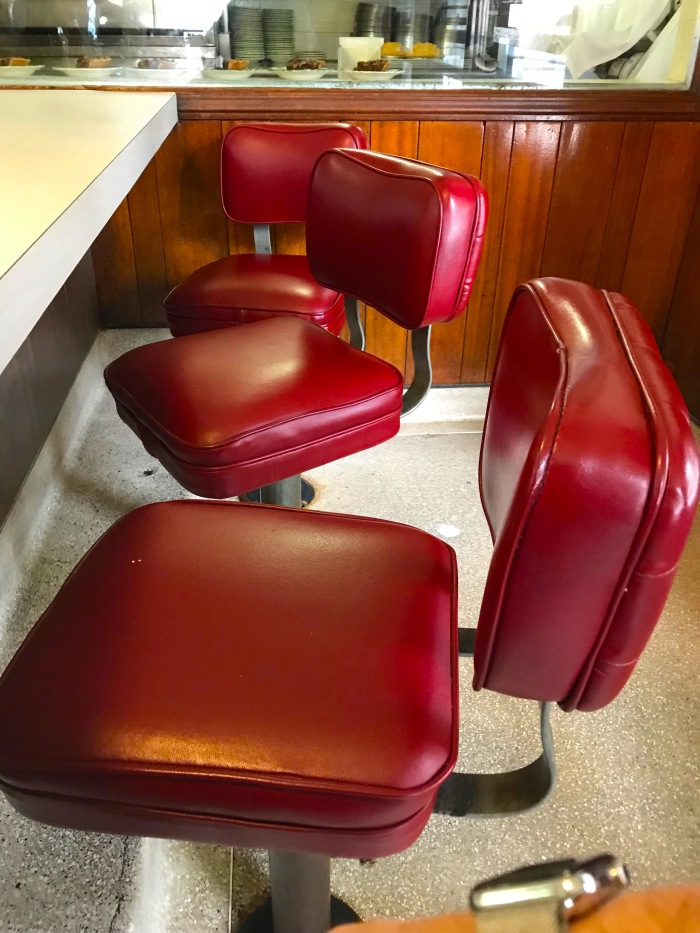 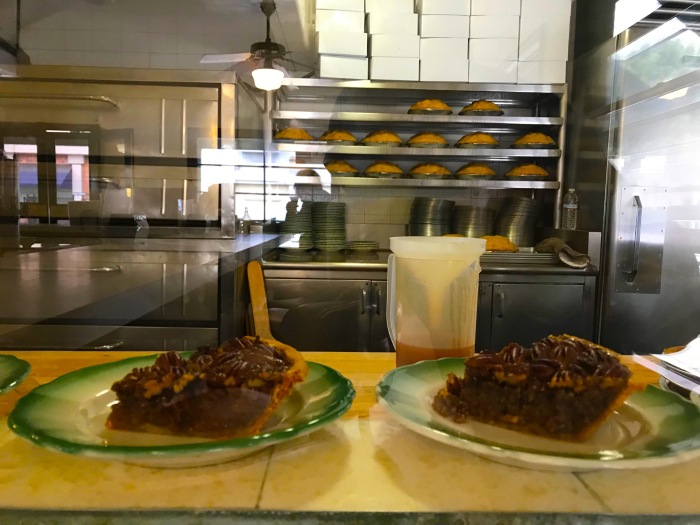 As you can see, it doesn’t take long to decide what to order: the menu consists of a few burgers, a couple of sandwiches, french fries and of course, pie!

For the purpose of this review, I ate at The Apple Pan twice in one week – on my first visit, I had the “Hickoryburger” – which is served with its own special sauce, mayo, pickles, and lettuce – and as you can see, there’s no mistaking the hickory sauce…

Time To Bite Into The Hickoryburger!

The burger shows up wrapped tightly around the bottom…a classic presentation, and important given the sauciness of the sauce that is slathered on the bun – but how did it taste?

Well, the first bite was EXACTLY what you want in a burger – a prefect mix of hot meat and cheese, a spicy sauce, and ice cold lettuce and pickle as a great counterbalance.

As you can see, I got my burger with Tillamook Cheddar because of course you do! These dill pickles are very tart, and there is a lot of iceberg lettuce on the burger as well – but, paired with the flavorful meat and zesty hickory sauce, they were perfect!

I ordered a side of french fries, and they showed up looking crispy and hot!

The fries were perfectly cooks – a nice bite to the outside, soft and creamy inside. The entire meal took less than ten minutes to make, and about that long to eat – this is a nice sized burger but not massive at all – which is a good thing for me, because I’m tired of the massive half pound of meat that routinely gets put on a burger these days…

Time For The Steakburger!

On my second visit, I got the Steakburger, which has a slightly different sauce that is reminiscent of a Thousand Island dressing, along with mayo, pickle and another big stack of lettuce!

I also got Tillamook on this one as well – and to be honest, I enjoyed this one even more – the sauce is less powerful, giving the other ingredients room to shine a bit more.

That said, both were very good burgers. When I teased this review with a picture of the “Hickoryburger”, someone remarked that it was the most “over-rated” burger in Los Angeles. To that I strongly disagree – is it LA’s best burger? No, but it’s possibly the friendliest!

On this trip, I avoided the fries so leave me room to end my meal with a slice of Fresh Apple Pie with a scoop of Vanilla ice cream… 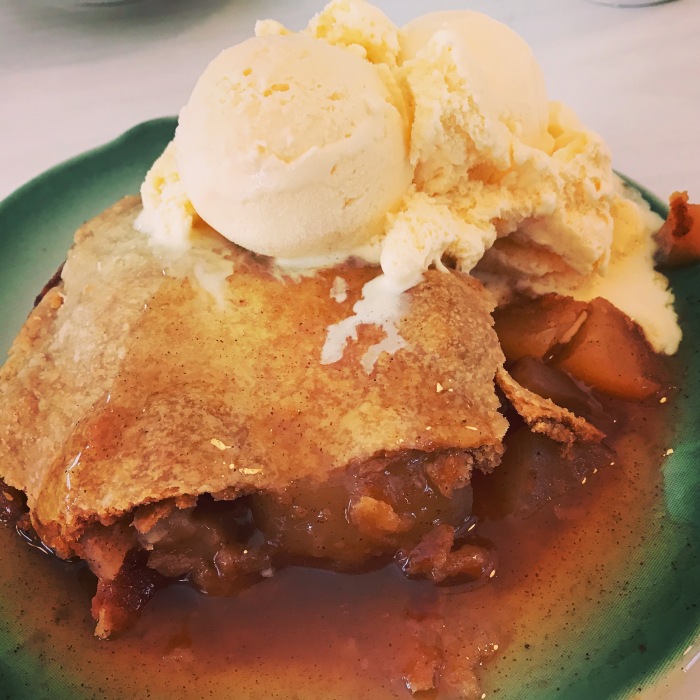 Well, there is no the way to say it: this slice of Apple Pie blew me away. The richness of flavor is matched by the tartness of the apple slices, which have NOT been suffocated with sugar, but allowed to shine one their own…and the ice cream is rich and smooth – this is a phenomenal piece of pie! 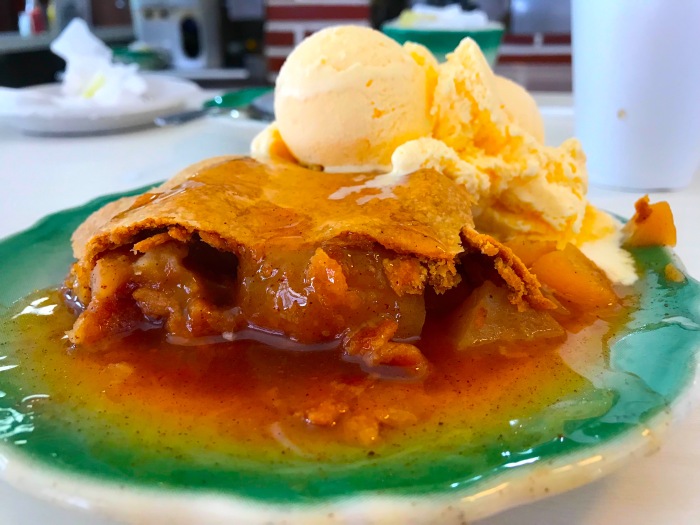 You can also order whole pies to go, and since this is the best tasting Apple Pie I can remember having, I plan to drop in one day and take one home to share! 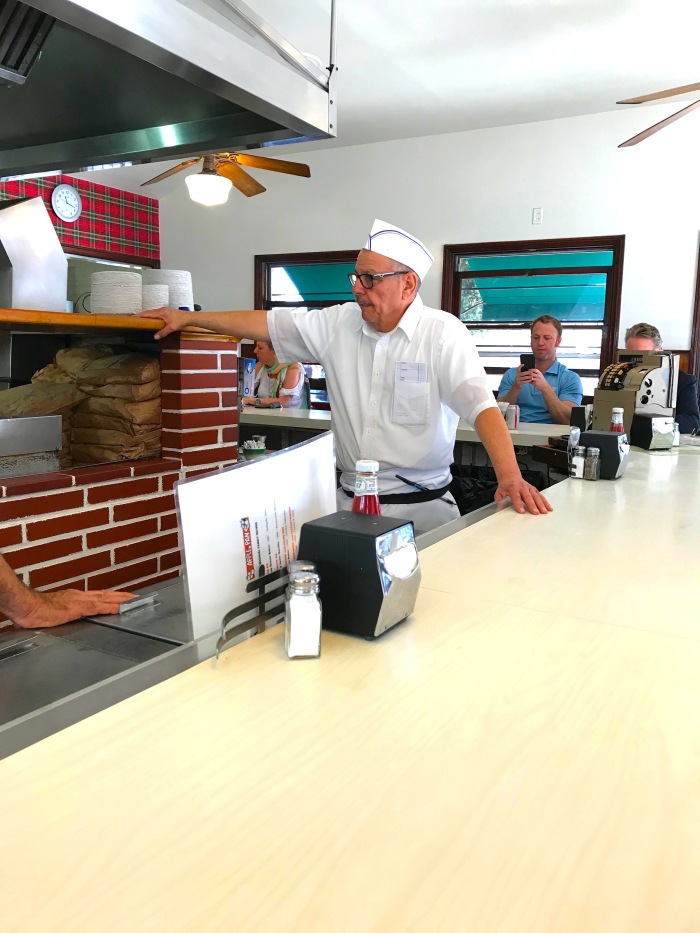 What I loved most about The Apple Pan is that it feels like a clubby, hole-in-the-wall that you drop into for a quick bite of food – and catch up with the workers.

My Waiter revealed that he’s been working at The Apple Pan for 42 years! As you can see, they still ring your bill up the old fashioned way:

This is the second bit of good news related to iconic LA establishments:

The legendary Hollywood hangout Musso & Frank is celebrating its 100th birthday this year by announcing plans to expand their dining rooms – a great positive sign for the business!

See some of the stars who popped in for one of their iconic Martinis by clicking here:

Let me know if you’ve eaten at The Apple Pan!

Like Loading...
‹ “Tokyo Vice”! A Gritty “Weekly Wednesday Bookmobile” Trip To Japan’s Underworld! My Tokyo Police Encounter!
Pennywise Is Back! The Official “IT: Chapter 2” Movie Trailer Is Here! “What The Friday!?!?!” Clowns Welcome! ›