Home › 70's Cinema › Actress Lana Wood Is Homeless! The Shocking Story Of A Fallen Hollywood Star! Here’s How You Can Help!

Actress Lana Wood Is Homeless! The Shocking Story Of A Fallen Hollywood Star! Here’s How You Can Help!

Time to look at one of the most beautiful “Bond Girls” who was also a member of Hollywood Royalty – and just revealed that she is homeless!

Lana Wood was a hugely successful Actress in the 60’s and 70’s, but she would perhaps be unfairly overshadowed by the superstardom of her older sister, Natalie Wood…

Lana had early stardom thanks to her role in the classic soap “Peyton Place.” Now, a story has broken that says she is homeless, and a fund has been set up to help!

Someone pointed this article out to me from Vanity Fair, which tells the tragic story of how Lana is now homeless! Here is a short excerpt from the story, written by Sheila Weller, who had a personal connection to the Actress:

“On Saturday I was able to get Lana on the phone. She had talked to no other members of the media. In the middle of the chaos of packing boxes, crying, and hugging her daughter and grandchildren, she told me, from her Ventura County house, “It’s pretty bad. The landlord wants us out—now—and we don’t have anywhere to go. We are a family of six. My daughter, Evan, who is 42, just got a return of the Hodgkin’s lymphoma she thought she’d beat, and she also has chronic obstructive pulmonary disease—C.O.P.D. When she walks, she walks around strapped to an oxygen machine. She has a wonderful husband who’s never missed a day of work in 20 years. But he doesn’t work for a big, moneyed company. They have three children—my crying teenage granddaughter is saying she doesn’t know what she’ll do if she doesn’t finish her year at her high school, and the two boys are saying: ‘We don’t want to go!’ to another school, either.”

Confronting her hectic packing, she said, “I’ve got seven years worth of accumulated books and CDs and nonsense. It’s a nightmare.”

“And now—being evicted—we have a black mark against us,” she said.”

Since this story broke, Wood has been interviewed on “Inside Edition” and her story has launched a go fund me site to help her…what a tragedy – but when you don’t work in the entertainment business, it’s easy to think that everyone drives limousines and attends the Oscars…the reality is far different…

Here is the link to the entire article in Vanity Fair:

This business a cruel in that regard, and now, she needs help. It is great to see the press coverage and the funding site set up by a fan to help her.

Here is the “GofFundMe” site where you can help support her:

A classic Hollywood sex kitten, Lana posed for Playboy, had a variety of roles, and always was in the shadow of her more famous sister.

The film introduced her with a hilarious double entendre, carried off with perfect timing by Sean Connery:

“I Didn’t Know There Was A Pool Down There…”

One of the most memorable scenes in “Diamonds Are Forever” comes when 007 is surprised by mobsters while in his room with her. She is “escorted” semi-nude from the room – in an unusual exit that includes one of the best one-liners in the entire Bond series!

Here is that memorable scene from “Diamonds Are Forever”:

Here is some great trivia: while filming the scene where Plenty O´Toole is found drowned, Wood actually had her feet loosely tied to a cement block on the bottom. Film crew members held a rope across the pool for her, with which she could lift her face out of the water to breathe between takes. The pool’s sloping bottom made the block slip into deeper water with each take. Eventually, she was submerged but was noticed by on-lookers and rescued before drowning for real. Wood, being a certified diver, took some water but remained calm during the ordeal, although she later admitted to a few “very uncomfortable moments and quite some struggling until they pulled me out.”

Over the course of her career, Wood appeared in more than twenty movies and over three hundred television shows – everything from “Bonanza” to “Mission: Impossible”, “Starsky and Hutch” to “Fantasy Island.”

Lana Wood retired from acting in 1982 to concentrate on a Producing career, but has since returned to acting in a number of low-budget films since 2008 – however, that wasn’t enough to keep her financially afloat.

Wood wrote a memoir, “Natalie, A Memoir by Her Sister” in 1984. Her many memorable Hollywood moments have been unfairly neglected because of the tragedy surrounding her sister, and these recent events are even more disturbing – hopefully, the press surrounding her situation will help her…

I have also told the story of a 70’s action star who has also struggled – Jan-Michael Vincent! 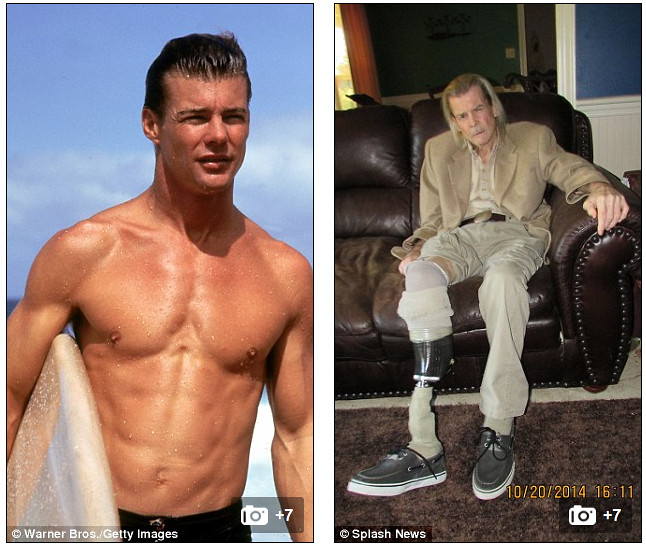 He was one of the hottest stars of the 70’s – then things went horribly wrong…here is that story:

Good luck to Lana Wood – hope fans continue to step up and help her!