The Beatles Are Going On Tour!

Well, some never seen material from the early days of Beatlemania has been included in a great looking new documentary coming to America’s HULU on demand service – as well s movie theaters around the world – a documentary that looks at their first tour of America! 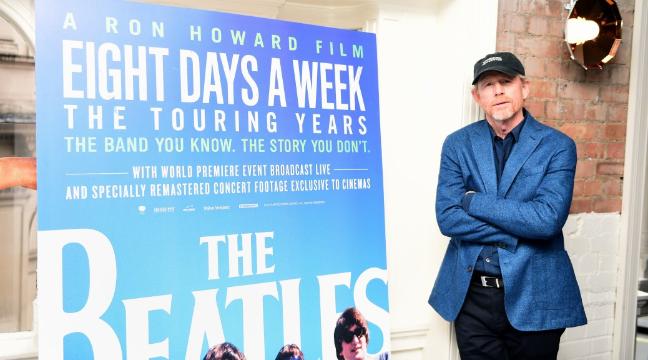 The Beatles Are On Tour!

Fans of The Beatles have enjoyed so much great new material released over the past few years, and this new documentary promises so much new stuff, such as their fight against segregation in the US, and how Paul and Ringo reflect back on that time in their life.

Director Ron Howard, along with his Producing partner Brian Grazer, sat down with Deadline.com to talk about this highly anticipated look at The Beatles first tour of America, beginning with Ron Howard explaining what fascinated him about the early days of “Beatlemania”:

“They pioneered a lot of aspects of what a mega rock career is, now. This came to me as Jeff Jones and the team at Apple Records collected more and more footage from fans and some bootleg soundboards that they believed could be used to enhance the live performance footage that had been seen before. That is how it came to me through Nigel Sinclair, who they’d talked to about producing it. They wanted to focus on the touring years. At first I thought that was going to be a disadvantage, but as I researched it, it became a huge narrative advantage. That point in their career was like an odyssey, an adventure story. The more I understood it, it became more like a survival story. Along the way, it became a coming-of-age story. Them, as men, and unbelievable artists who evolved from pop stars to musical mavericks who redefined the medium.”

Here is the exchange where Howard discusses the newly discovered material that is in the film:

HOWARD: I learned so much about them. There is seven or eight minutes of new footage but because I’m not encyclopedic about The Beatles, that’s not what meant the most to me. What excited me was this period of growth and what it said about that period in our history and the upheaval of the cultural revolution that was going on, and their role in it. And the way they were affected and the way they affected it…the biggest surprise? The integrity they had, as artists and individuals, and how they applied it.

Paul And Ringo Were Involved!

The two surviving band members were active participants in the creation of this new film. Here is how Howard describes working with Paul and Ringo:

HOWARD: I think this film came along at a time in the lives of Paul and Ringo where they could look at this with a kind of perspective they hadn’t been willing to, before. We did two different interviews and I noticed a real change from the first interview to the second one, with both guys. They saw the cut footage, they began to see the approach I was taking, and the kind of insight I was looking for, and they really opened up in the second interview. Talking quietly to Paul, after, he said, “You know, I usually resist talking about The Beatles. It was a time in my life I was proud of, but it was a time in my life. Now, I finally feel like I’m entitled to celebrate that.” In a way, that reluctance was a way of looking forward, and Ringo has that same thing. I was very fortunate that I could interview them at a moment when they were more open than ever to giving us honest answers. Sometimes, it seemed honestly thrilling to them and sometimes it was daunting and exhausting and even frightening. The interviews reflect that in very specific ways that hadn’t been so much, before.

You can see the entire story at “Deadline.com”.

Here’s a great story from the LA Times, who sat down with Howard, McCartney and Ringo – and they reveal how there is a section of the film that discusses the rider in the Beatles’ concert contracts specifying that they refused to perform in segregated venues while touring the U.S. 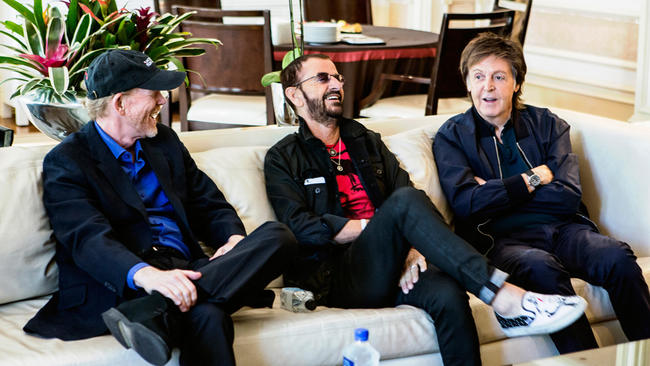 Here is the writeup in the LA Times:

“One of the great things for me” about the film, McCartney, 74, said, “was all the civil rights things that we’d always naturally had an empathy with, just because we had loads of black friends and of all our [musical] heroes, many of them were black. To see in the film that we actually put it in our contracts … we didn’t remember that. I was very impressed with that. It was very cool.”

It was a revelation to Howard as well.

“I didn’t know anything about that,” said Howard, who also is one of the film’s producers along with Brian Grazer, his Imagine Entertainment production company partner, Concord Bicycle Music CEO Scott Pascucci and Sinclair. “One of the big surprises to me was how clear they were about it, how matter of fact. I knew about their anti-war stances later. But I had no notion [about their position on racial equality]. That was courageous stuff at that time.”

FILE – In this Feb. 18, 1964 file photo, boxer Cassius Clay lifts Beatles member Ringo Starr while the singers visited Clay’s camp in Miami Beach, Fla. Others from left are Paul McCartney, George Harrison and John Lennon. A few days earlier the British musicians had appeared for the first time on the Ed Sullivan Show. A week later, Clay would beat Sonny Liston and go on to even greater things as Muhammad Ali. (AP Photo)

I posted a story about the Fab Four meeting Muhammad Ali when he was still Cassius Clay – what a huge pop culture event that had to have been at the time – here is a story about those photos:

And you can read the entire LA Times article by clicking on their story here – it is a great article!

This isn’t the first look at the band’s first US tour – I own this laser disc release that captures the band on their first US visit, which is terrific, and I look forward to seeing this new documentary as well…

The Fab Four look so young and innocent, but within three years, they would release an album that still stands tall fifty years later… 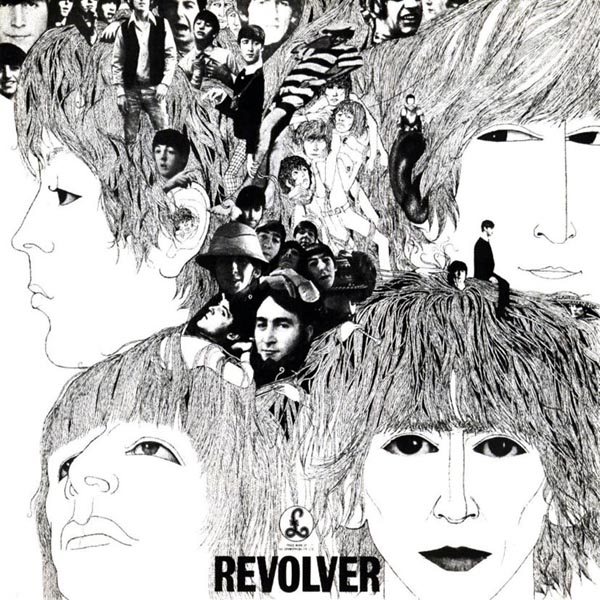 Here is a look at this classic Beatles album:

I was also able to attend the anniversary of The Beatles’ 50th anniversary concert at The Hollywood Bowl:

It was a unique night for many reasons, and you can read my review here:

There are plans to release their 1964 concert at The Hollywood Bowl on home video, which I’d love to see…and the band continues to release other great material as well:

Amazing music videos from the 60’s were all released in a new blu-ray package, which you can see here:

Let me know what you think of the new HULU movie when it premieres on Sept. 15! 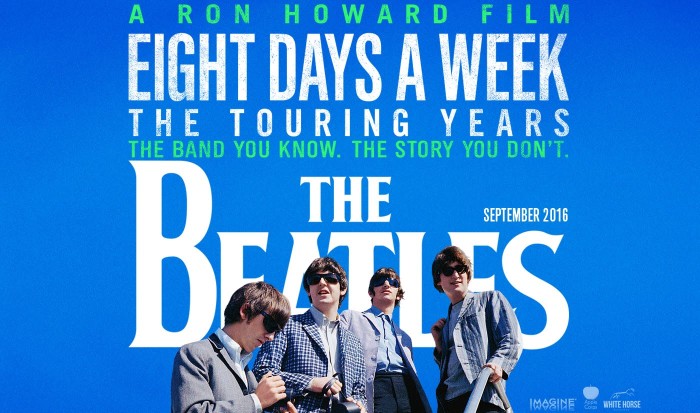 Like Loading...
‹ How To Lose $812-Million In The Movie Business! 2016’s Tough Tough Year!
BREAKING NEWS! Bloopers That Is! TV’s Best Live Mistakes! ›