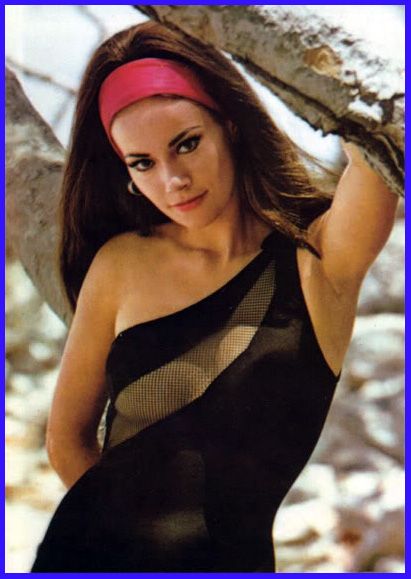 007 has had some of the most beautiful Actresses in movie history featured as a “Bond girl”…including such modern-day Actresses as Halle Berry and Rosamund Pike -but in the beginning, it’s wasn’t that type of stunt casting. Here’s a look at one of the earliest Bond girls who moved from 007 to Giallo! 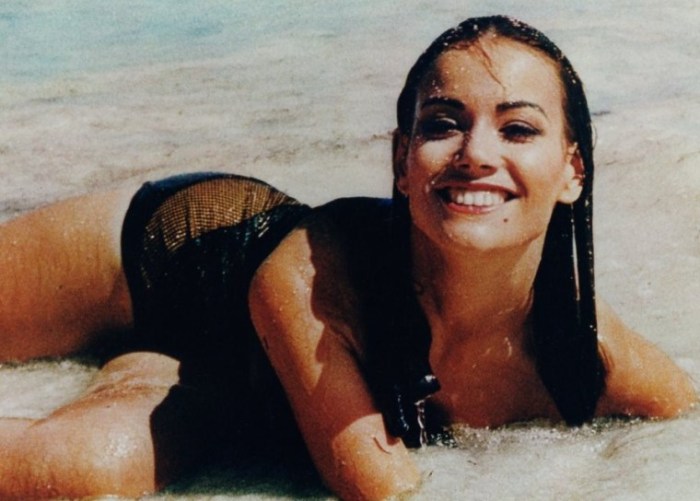 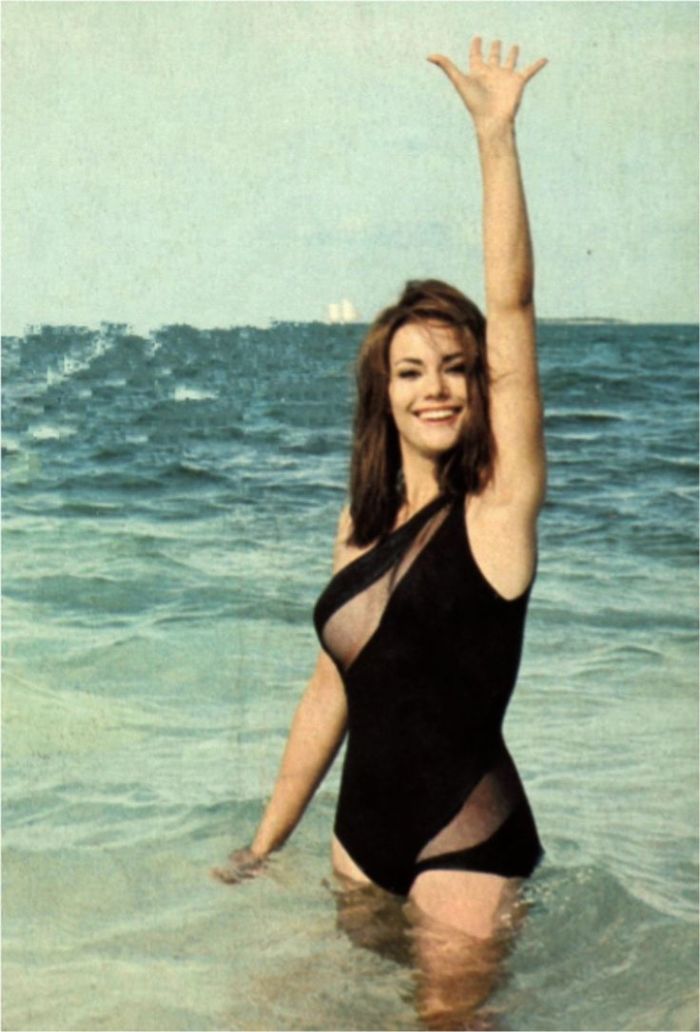 Meet Claudine Auger – born is France, she earned the title of “Miss France Monde” and was the first runner-up in the 1958 “Miss World” contest.

Claudine’s big break came in 1965 when she was cast in the fourth James Bond film. Auger is, to me, the most beautiful Bond girl of all – and she shares the poster with Sean Connery as Bond girl “Domino” in “Thunderball”: 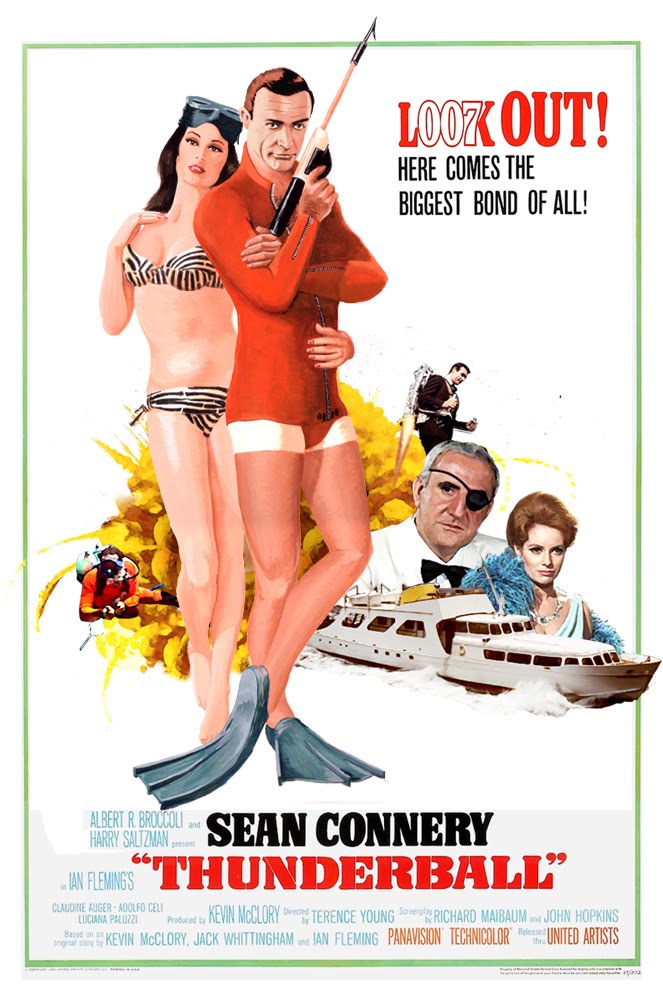 Here is the classic trailer for one of the best Bond films ever: 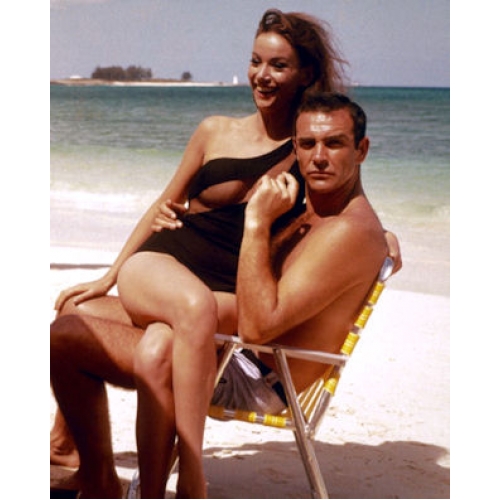 Auger holds her against up against 007, and the film’s huge success made her a star – which she used to star in some of the best 1970’s sex shockers of all time!

In 1971, she starred with two other Bond girls, Barbara Bach and Barbara Bouchet, in the classic Italian Giallo “Black Belly Of The Tarantula”! 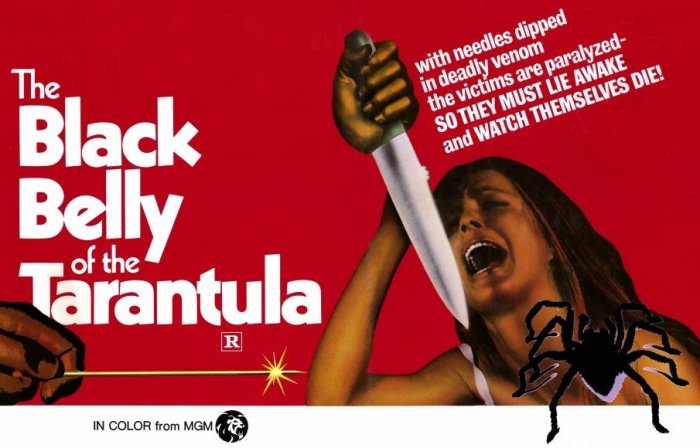 Check out the intense trailer! 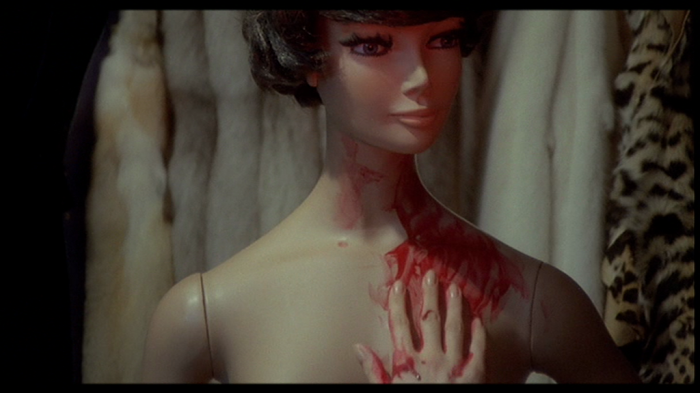 Here is the plot for this classic Italian thriller:

Inspector Tellini investigates serial crimes where victims are paralyzed while having their bellies ripped open with a sharp knife, much in the same way tarantulas are killed by the black wasp! 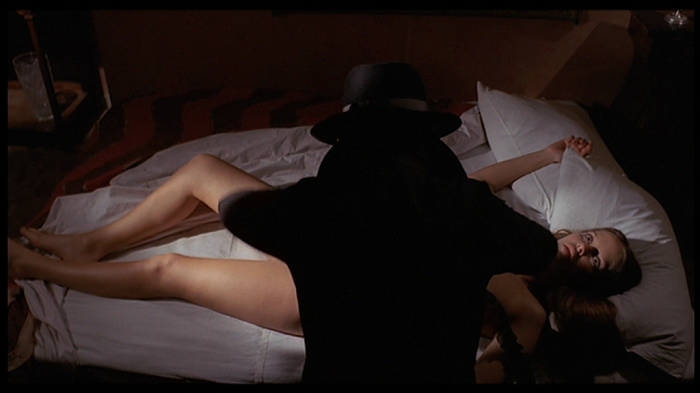 Claudine is terrific in the film, which is one of the best Italian “giallo” thrillers – more on this genre in a second, but first, time for some choice dialogue!

Paolo: “But, man isn’t an insect, my dear Simon. We have centuries of civilization behind us, you know.”
Simon: “No, I don’t know. I wasn’t there.” 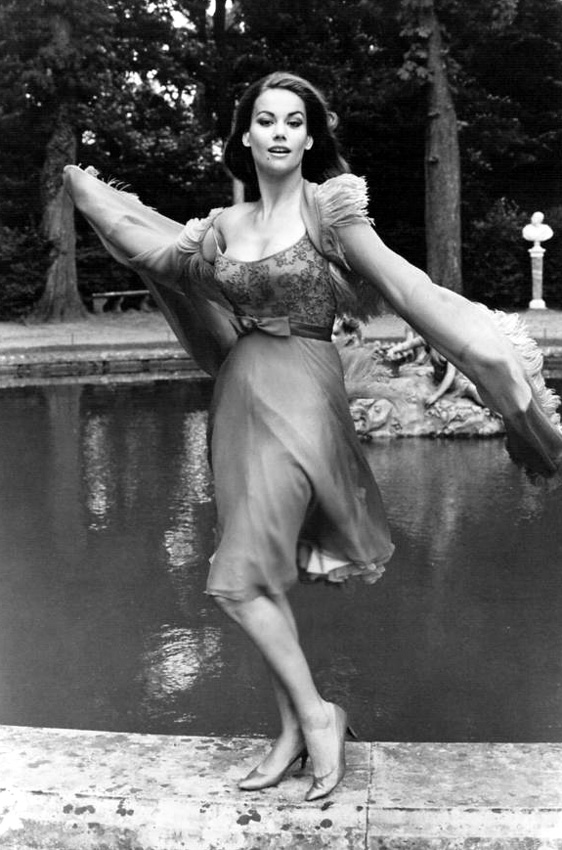 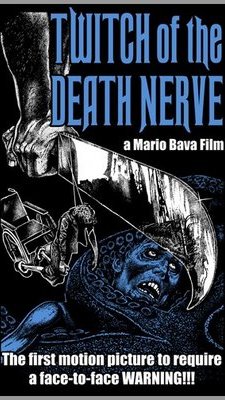 “Twitch Of The Death Nerve”! 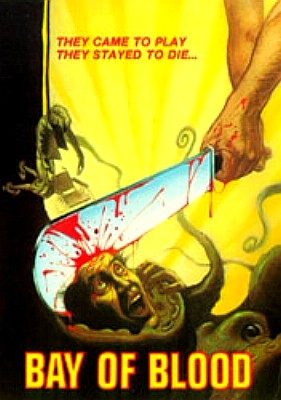 Or you can call it “Bay Of Blood” – it was known by both titles – and many others as well!

Here is the plot: Countess Federica, the elderly owner of a coveted piece of bayside property, is brutally slain by her husband–who is himself killed by a mysterious third person at the murder scene! Who is the killer? Director Mario Bava’s black comedy of human greed boasts 13 characters and 13 of the most shocking murders ever filmed!

This is considered by many cult film fans as Director Mario Bava’s most influential film and the Godfather of the “slasher” genre! 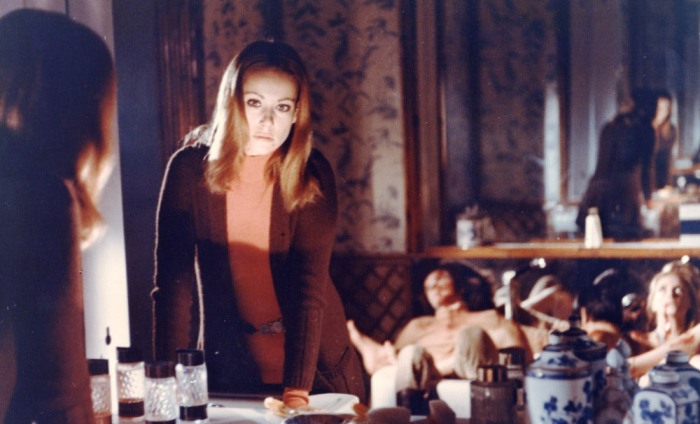 Here is more great trivia, thanks to IMDB: “Friday the 13th Part 2” takes two murders from this film, almost shot for shot! 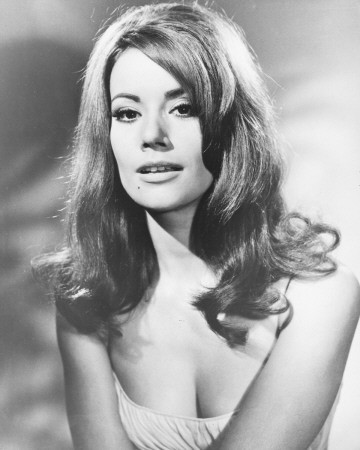 Auger has had a long and successful career, but these movies are, without a doubt, some of her greatest work!

As I mentioned before, Auger co-starred with Barbara Bouchet, who was also a Bond girl!

Bouchet was in the spoof “Casino Royale”, along with a number of other great films – you can read all about her here:

And I mentioned Italian “giallo” films, which were sex shockers from the 70’s – great cult classics like this: 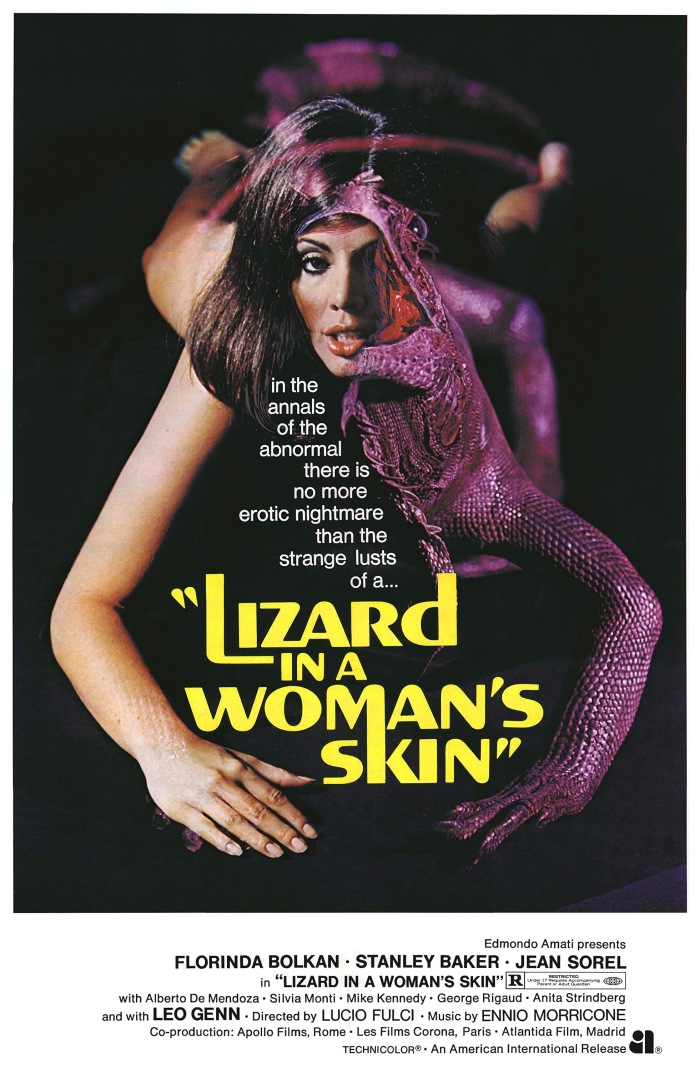 Read about the classic “Lizard In A Woman’s Skin” and more italian sex shockers by clicking on my story here:

And if you want to see one of the greatest titles in the italian “giallo” genre, what about this? 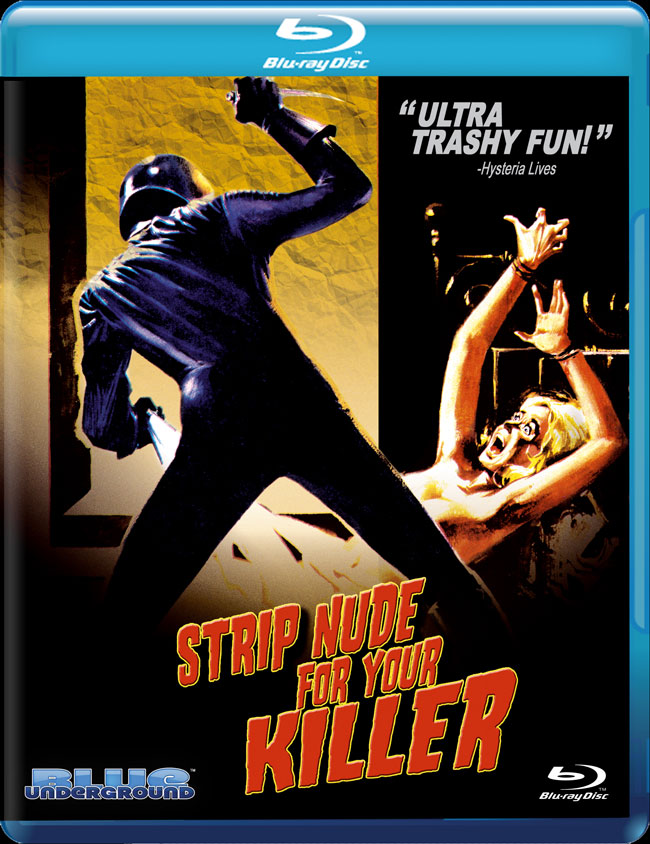 This is a perfect example of the genre, a great 70’s thriller from Italy – read all about it by clicking on my story here:

Let me know what you think of the great Actress Claudine Auger!