Time to check out the greatest set of steak knives in movie history! 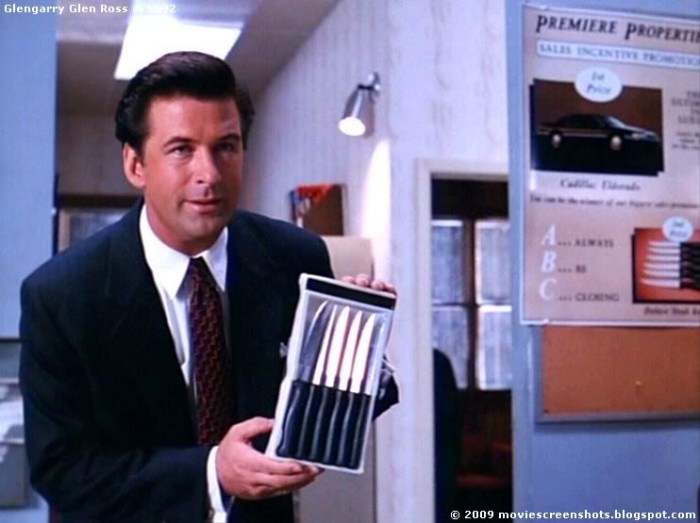 Look at this cast. Look closely. Because this is the only time I will show them.

Some of the greatest actors of our time – Al Pacino, Jack Lemmon, Alan Arkin, Kevin Spacey, Ed Harris – all in one great movie – and here is a taste: 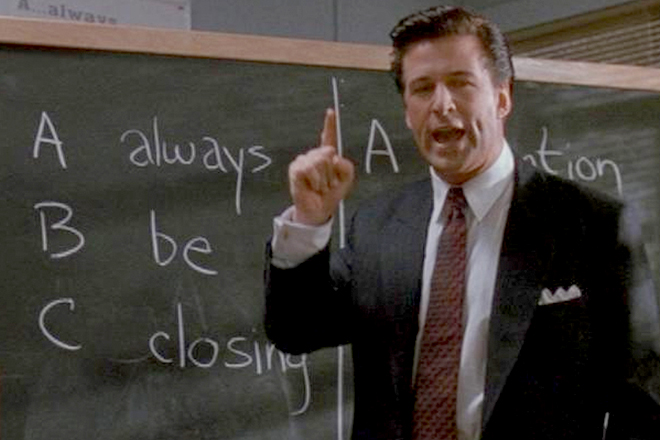 And Now, Our Main Attraction:

I love that trailer almost as much as I love this movie. But we aren’t here to discuss the film, or those great Actors in the movie. This post is all about one person. Alec Baldwin. Or, as he is known in the movie: Blake. And the fascinating story of how he came to be.

Blake: Put. That coffee. Down.
[pause]
Blake: Coffee’s for closers only.

Meet “Blake” – a guy who shows up on night to lecture a group of salesmen about their jobs. David Mamet wrote a screenplay that you can stick between your teeth and bite down hard. You meet Blake when he shows up and tells Jack Lemmon to “Put. That. Coffee. Down.”

And from that point on, it is a masterclass in acting. And it was never in the play!

This is legendary dialogue from a brilliant movie…

Quickly, the plot of “Glengarry Glen Ross”: Times are tough in a Chicago real-estate office; the salesmen are given a strong incentive by Blake to succeed in a sales contest. There is no room for losers in this dramatically masculine world; only “closers” will get the good sales leads.

Again, all we care about is that “Blake” has shown up to speak to the salesmen gathered – and his words are HARSH.

Blake: “We’re adding a little something to this month’s sales contest. As you all know, first prize is a Cadillac Eldorado. Anybody want to see second prize?
[Holds up prize]
Blake: Second prize is a set of steak knives. Third prize is you’re fired.”

Dave Moss: You’re such a hero, you’re so rich, how come you’re coming down here wasting your time with such a bunch of bums?
Blake: You see this watch? You see this watch?
Dave Moss: Yeah.
Blake: That watch costs more than you car. I made $970,000 last year. How much you make? You see pal, that’s who I am, and you’re nothing. Nice guy? I don’t give a shit. Good father? Fuck you! Go home and play with your kids. You wanna work here – close! You think this is abuse? You think this is abuse, you cocksucker? You can’t take this, how can you take the abuse you get on a sit? You don’t like it, leave.

“Blake” gives it to the salesmen – he doesn’t care…

Blake also makes it very clear, as you can see in the picture above, what it takes to be a great salesman… 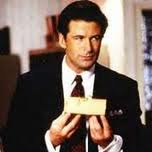 Of course, Blake has the new sales leads – the “Glengarry” leads – but he has NO intention of giving them out.

Blake: “These are the new leads. These are the Glengarry leads. And to you they’re gold, and you don’t get them. Why? Because to give them to you would be throwing them away. They’re for closers.”

David Mamet’s two-act play, first staged in 1983, won the Pulitzer Prize and remains a classic of contemporary theater. Mamet adapted the screenplay himself, and it’s almost a word-for-word transcription. Yet the most famous, most quoted, most popular scene in the movie doesn’t exist in the play. Mamet was forced to create it, along with a few other additions, because the play is unusually short, even by theatrical standards. (According to legend, he sent the completed draft to Harold Pinter, with a note saying that it seemed finished, but was a wonky length, and asking for guidance. Pinter’s reply: “It’s perfect. Stage it.”) Has this happened before or since—a world-famous author upstaging his own hugely acclaimed source material with a bit of new material devised expressly for the movie?

All hail young, skinny Alec Baldwin. His character—inexplicably called Blake in the credits, rather than Fuck You — doesn’t exist in the play, and he only appears in this one scene. Yet he arguably sets the tone for the entire movie, providing a much more concrete sense of the pressure these salesman are under. Baldwin gives the monologue a marvelously practiced ring, as if he goes around performing it for various seedy offices around town; he’s the motivational speaker from Hell, determined to either increase productivity or inspire suicide. 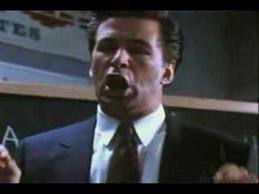 And Baldwin knows how to put his own arresting spin on Mamet’s famously repetitive dialogue.

I mean, look at the utter contempt and disgust that Blake has for these guys:

And to close out, here is a taste of this brilliant performance:

So, go and watch this film for the first time – or again and again as I have – and embrace this “not in the play” scene that in so many ways sets the stage for everything that comes after….

My Tweets
Yes i flipped over the @santosails @santorini_road_trips @santorini sunsets because we had the best guides! @dudalicioustoo @apple @iphoneselfiesss #shotoniphone #iphones #travel #greekislands #santorini